Natural gas prices on the NYMEX dipped below $2/mmBTU in December 2015 for just the second time in eight years.  At other natgas hubs—like in the Marcellus in the US Northeast—prices went below $1. 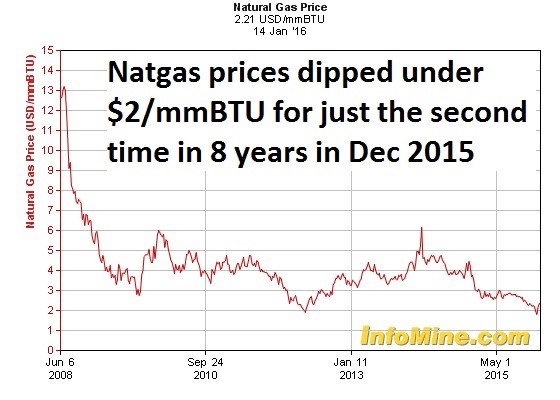 With a warm winter and high , prices could stay low—which hurts all producers.  But it could be the final gasp for ones who have debt-soaked balance sheets.

While the company still has the same management and operates in largely the same areas it has for most of its existence, things have changed drastically at the company over the past six years.  And because of that, I don’t see the company surviving this time of low prices.

I’ll walk you through how this train-wreck went off the rails.  Really, it’s a story of  the company continued to drill uneconomic or marginal gas wells while overpaying for entry into new areas (acreage in the Marcellus and Uinta) while financing these activities with debt.

Even though UPL is still a low-cost operator, the company now has a debt-soaked balance sheet and interest costs that are rapidly destroying shareholder value. 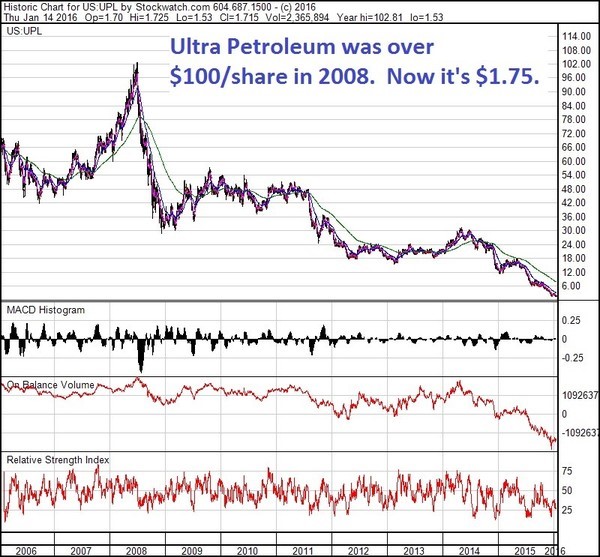 By no means is Ultra the only company that has lost its way in recent years.  Nearly the entire industry chose to lever up to chase new oil plays while outspending cash flow to simultaneously grow natural gas production.

By examining the details of the transformation of Ultra Petroleum from Wall Street darling to a company fighting for its life will we will get a better understanding of the precarious position the entire industry finds itself in.

The strategy of UPL stands in stark contrast to that of Rice Energy which has spent far less money, drilled far fewer wells and taken on much less debt wells to achieve a comparable level of production and larger cash flow.

Ultra Petroleum has three concentrated areas of operation: the Pinedale/Jonah area of Wyoming where it produces tight, dry gas; northern Pennsylvania where the company produces from the Marcellus and the Uinta Basin where UPL is pursuing a secondary recovery project in a medium gravity oil field.

UPL has operated for more than a decade in Wyoming and currently holds 67,000 net acres in the Pinedale and Jonah fields that produce approximately 750 mmcf/d for the company.  Below is a graphic containing a snapshot of its acreage: 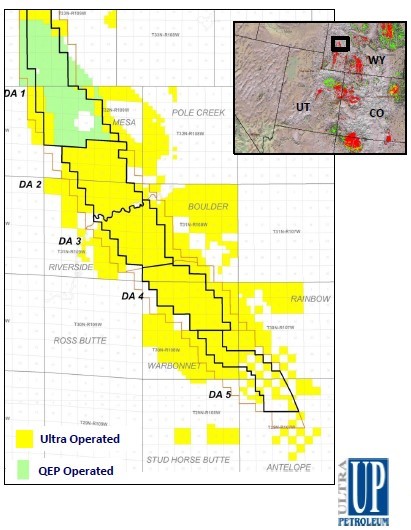 In 2015 the company spent approximately $435 million to drill 137 net  vertical wells in Pinedale, or spent about $3.2 million per well.   Due to the long production history of wells in Pinedale and Jonah, where there have been more than 4,000 wells drilled over the past 25 years, it is reasonable to expect the average well to produce approximately 4 bcf over its lifetime.

As might be expected given UPL’s long-term presence in Wyoming, the majority of the company’s value rests here.  Assuming 75% of Ultra’s acreage is drilled over the long-term, and using 40-acre well spacing, the company has a total of 1,256 net locations that would yield it approximately 6 tcf over the lifetime of the wells.

However, due to the extensive drilling that has already occurred on UPL’s acreage, it has a working interest in 2,500 wells, and the high initial decline rate of its wells, it is reasonable to assume that approximately 3 tcf of future production remains on Ultra’s Pinedale and Jonah acreage.  Assigning a value of $1.50 per mcf for the remaining reserves in Wyoming values UPL’s Pinedale/Jonah property at $4.5 billion.

In October 2013 UPL entered the Uinta Basin through the purchase of the 9,000 acre Three Rivers field that was producing 4,000 barrels of oil per day (bopd) at the time of purchase.   Ultra financed this $650 million purchase entirely through debt.  Below is a snapshot of the company’s acreage: 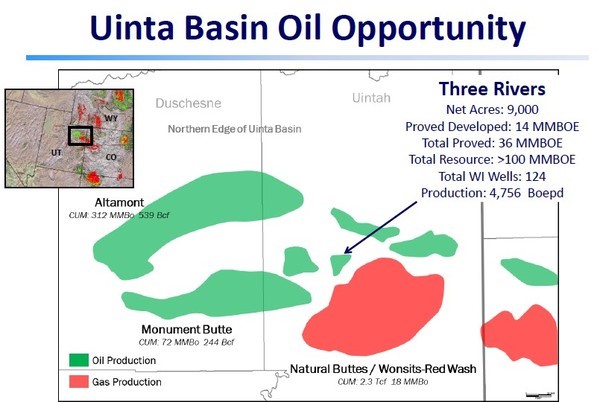 Though the Three Rivers field was considered a mature field at the time of purchase due to its extensive development, UPL management justified its purchase price due to the potential for additional recoveries through an infill drilling and waterflood program.  During 2014 the company drilled 74 new vertical wells into Three Rivers at a cost of $1.7 million each (about $150 million total) and ramped production up nearly 3-fold over the course of the year.    According to the company, the Three Rivers field exited 2014 at over 11,000 bopd.  (Source: Company 2014 10K)

Unfortunately for shareholders, the timing of a massive ramp up in production from Three Rivers could not have been worse.  Due to the waxiness of the crude oil in the Uinta Basin (it is priced off a benchmark called “Black Wax Crude”), Ultra and others receive a discount to NYMEX WTI of between 10 and 20% and sometimes even higher.  Receiving large discounts and falling NYMEX prices has made much of the recently added production rather unprofitable.

Due to the weakness in Uinta pricing over the past year UPL drilled only 19 wells in 2015 and did not complete any of them.  However, in the first half of 2015 Ultra initiated a waterflood on Three Rivers that it hopes will greatly improve recoveries.

While it is still early days with regards to the success of the waterflood, I am somewhat skeptical a material increase in recoveries can be achieved in a field with 18 to 20 API gravity oil.  Time will tell.

The lack of new wells coming online in 2015 and the early stage nature of the waterflood caused production at Three Rivers to collapse 60% in the first 9 months of 2015 to only 4,750 bopd according to a September 2015 presentation.  I expect further declines in production in 2016 as minimal activity is likely to occur due to today’s weak prices and the heavy discount on Uinta crude.

After spending over $800 million on the acquisition and development of Three Rivers over the past two years, UPL has little to show for its efforts.  With production from the field falling and it producing negative cash flow in today’s price environment, Ultra has destroyed nearly $600 million of shareholder capital in a very short period of time.

A fair value for UPL’s Three Rivers field, assigning a value to its proved developed producing reserves of $14 per barrel, would be approximately $200 million.

Due to the success of early drilling in the Marcellus, UPL increased its acreage positions in and around Tioga and Potter counties to 320,000 gross or 170,000 net acres shortly after entering the Marcellus.  In 2009, the company purchased 80,000 net acres in northeastern Pennsylvania for $400 million or $5,000 per acre that brought the company’s total net acreage position to approximately 250,000 acres.   Similar to the purchase of Three Rivers, this acquisition was funded entirely with debt.   During 2012 the company drilled 27 net wells on its Marcellus acreage at a cost of over $200 million and in 2013 drilled another 20 net wells costing approximately $150 million.

By 2014, unable to produce consistent results on its acreage in northeast Pennsylvania and a very weak pricing natural gas in the Appalachian Basin, UPL significantly reduced its exposure to the Marcellus by swapping 155,000 net acres and $925 million in cash with Shell for Shell’s acreage in the Pinedale.  Once again, the cash portion of this transaction was funded entirely with debt. 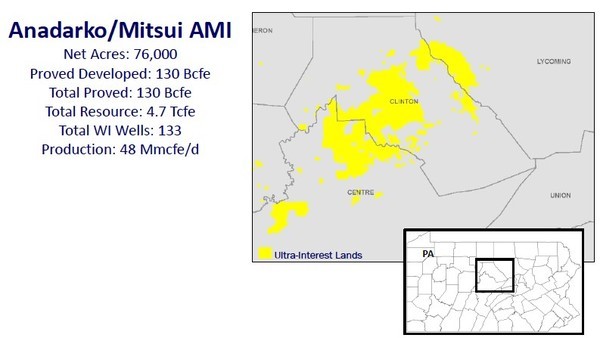 Due to continued weak wellhead prices in the Marcellus, gas for delivery into the Leidy, PA hub on January 8th averaged $1.30 per MMBTU, and acreage that lies outside of the most prolific part of the play, a fair value for UPL’s remaining 130 bcf of proved reserves in the Marcellus would be approximately $.75 per mcf or $100 million.

Due to UPL’s propensity to fund property acquisitions with debt during a period very low natural gas prices, the company’s debt load has grown significantly in the past 7 years.  The below table display’s the company’s growth in year-end debt:

While Ultra Petroleum has assets that can be valued at approximately $4.8 billion and debt of $3.4 billion, one could posit that the company’s shares should trade closer to their estimated net asset value of $8.50 per share ($1.3 billion in assets/153 million shares) rather than their current going rate of under $2.00 per share.

But it gets worse.  During Q3 2015, Ultra realized a gain of $45.3 million on its gas hedges which improved its average realized price to $3.33 per mcf from the otherwise $2.68 per mcf had the hedges not been in place.  However, Ultra’s natural gas hedges expired in October 2015.  Without a hedge book in place the company is likely to see its realized price for gas fall approximately 20% in Q4 2015 compared to Q3 2015.   Even weaker realizations can be expected Q1 2016.

Though UPL’s 2016 capex guidance will not be available until Q4 results come out next month, the company is likely to spend only enough to keep production flat in Wyoming.  According to the Q3 2015 company conference call, this would indicate about $300 million in spending in Wyoming this year.  Also, UPL is likely to spend only minimal amounts on its Uinta and Marcellus projects areas in 2016 due to the very poor current economics of both project areas.

It is quite clear that the strategy of UPL over the past six years of:

has severely damaged the company’s ability to weather today’s storm.

The outlook for Ultra Petroleum stands in stark contrast to that of Rice Energy.  Rice has a manageable debt load and concentrated, high-quality asset base that was acquired at reasonable prices which allows the company to grow production without grossly outspending cash flow.

Lastly, and most importantly, the inability of gas-focused companies such as UPL (Chesapeake Energy would be another) to survive the current market difficulties and increase drilling as prices improve, will make the next upturn in prices one for the ages.

The searing downturn that is now in its final stages has so severely damaged the risk taking appetite and risk taking ability of the E&P industry that US natural gas production has now entered a decline that will last for years.  This situation will be great for the industry survivors such as Rice Energy (RICE-NYSE) and but may be of little value to companies like Ultra Petroleum.

Editors Note—This is a story about survivors.  This stock is a THRIVER—and it put my portfolio in 2015 into the black.  I now make $3500 a month in dividends from this stock.  Click HERE to get it working for you.