What did Chevron accomplish in 2015 by outspending cash flow by $19 billion?

That is what Chevron managed to achieve in 2015 by spending $31 billion while generating just $19 billion of cash flow.  And that is actually incredibly bullish, despite the fact that the oil price has come down hard already in 2016.

Investor sentiment–from both the shareholders and the lenders–is forcing ALL producing companies to move closer to spending within cash flow.

What would Chevron’s production and reserve growth look like if they do that?  I’m guessing it would be MUCH less.
Their capex in 2016 is going down 22% $26.6 billion, but the savior for the company in 2015–its downstream refinery business–is getting crushed right now.

Refinery margins were huge through most of 2015–they contributed $7.6 billion in profits to Chevron in 2015–but crack spreads have recently fallen a lot.  And with a glut of some 160 million barrels of refined products in the USA, that won’t change much this year.  (I got short refineries in January.)

This all reads like bad news, but it’s actually very bullish.  These numbers say how far the oil price must go up for western companies to make money.  And now asset sales are slow, and lowly priced (everyone is a seller), debt is being reined in and equity is a non-starter for all but the best companies.

If you want the truth you have to look directly at the numbers.

Chevron’s Q4 and full year 2015 numbers speak volumes.  They tell us that something has to give. And as I show you at the bottom here, that may be happening now.  In Q4, they generated $4.6 billion in cash flow, and spent $9.4 billion on capital and dividends.

Here is how the full year 2015 cash inflows and outflows look for Chevron:

It isn’t a pretty picture.

When you include both capex spending and cash required for its dividends, Chevron spent $38.6 billion while generating only $19.5 billion from operations.

Talk about living beyond your means.  The obvious question is how did Chevron finance all of this outspending?

Well, they did it like anyone who lives beyond their means would.

First they dipped into their savings.

And then they started selling off some of their belongings. 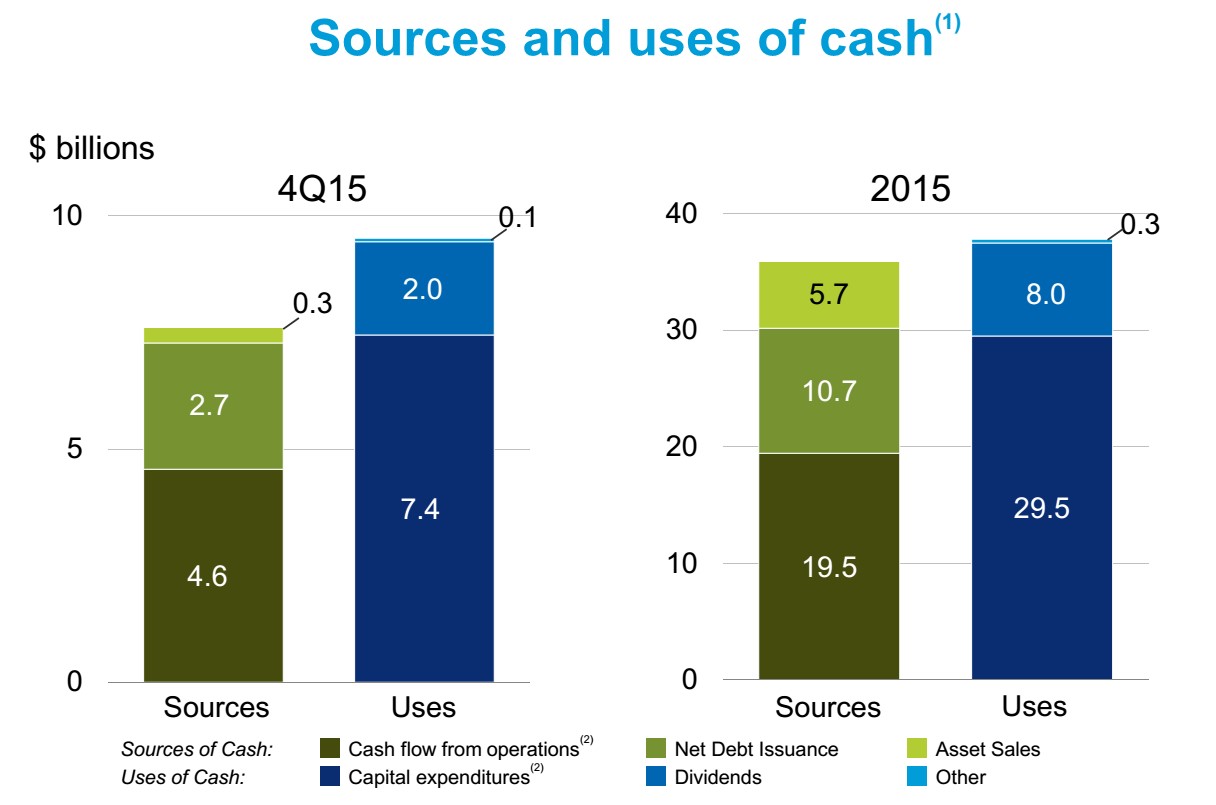 By massively outspending cash flow, running up debt on its balance sheet and selling assets Chevron managed to maintain its dividend and keep its production basically flat. (At least they didn’t spend any money on share buybacks, like the $4.4 billion they did in 2014.  Watching these companies buy back stock during the good times when the stock prices are high and then buy back none now must be irksome to more than a few shareholders.)

If Chevron had lived within cash flow, you have to wonder what the dividend might have been and what production and reserve growth would have looked like.

It is not a pretty picture.  2016 is shaping up to be significantly worse considering that oil prices in 2015 were on average $20 per barrel higher than where they sit today.

Last year would have been much worse for Chevron if the company didn’t have its own refineries. Chevron’s downstream operation (refineries=downstream, pipelines=midstream, producers=upstream) actually benefits from low oil prices and that helped significantly cushion the blow.

Chevron’s downstream operations recorded a profit of $7.6 billion in 2015.  Without that this company would be in far worse shape.

This is what life looks like for Chevron.  A company with a very mature low decline production base and the benefit of a profitable downstream operation.

No wonder the shale guys are feeling so much pain.  They have young, very high decline production and no diversifying downstream business segment.

Seeing how Chevron allowed its balance sheet to deteriorate in 2015 once again underscores the point….

The biggest threat to the Saudis is not from the shale producers, it is from the Federal Reserve and its ZIRP (zero interest rate policy).  Can you imagine Chevron allowing its long term debt to increase by nearly 40% in just one year if interest rates were at 8%?

Chevron’s massive outspending in 2015 is how the shale boom was built right from the start.  The shale producers had access to billions and billions of dollars of low cost funding.

Low oil prices have ended that party.  Reasonable interest rates would have done the same.

What is abundantly clear is that 2016 is going to be a year of very hard decisions for a lot of people in this industry.  For Russia and OPEC it is about cutting production.

For Chevron, that hard decision could involve its dividend.  If Chevron completely eliminated its dividend in 2015 it would still have outspent cash flow in by $11 billion.  That was with considerably higher oil prices.

To me, the sign that the supermajors are really feeling the fiscal pain is a sign that investors can have realistic hopes of a re-balancing–and the ending of the (allegedly) big global production surplus.

We are potentially seeing that happen right now, as the American Petroleum Institute (API) issued its projection of a surprise 3.3 million barrel draw in crude inventories this week.  The weekly EIA numbers could prove very interesting later this morning.

EDITORS NOTE–Few business models in the energy patch work at $30 oil.  But I found one that does–they actually have already raised their dividend in 2016 already, as oil prices sank to their lowest prices in over a decade.  That’s where I want to be with my money–The Sure Thing.  Click Here to get the name and symbol.