Heavy oil stocks will be The Top Investment in Energy if oil keeps gaining past the $45/barrel mark.

The secret is in the numbers.  Let me show you how and why using Baytex Energy (BTE-NYSE/TSX) as a perfect example—because they have both light shale oil in the Eagle Ford and heavy oil up in Canada.

The stocks of light oil producers soared as global oil prices rose from $26-$46 in February and March.  But for investors, the leverage in the next $20 upward move in oil belongs to heavy oil stocks.

Below is a table from Baytex’s most recent corporate presentation.  It depicts the company’s operating netbacks in Q4 2015.

The left column is Canadian heavy oil.  The right column is the Eagle Ford. 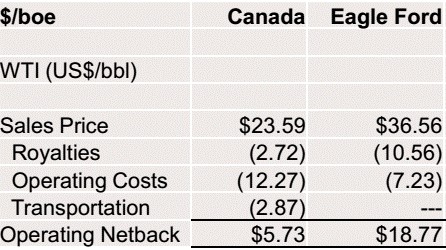 “Netback” is the industry term for “profit per barrel”.

The textbook definition would be that an operating netback is net sales revenue generated from selling oil production less the cost of royalties (fee to the mineral rights owner), lifting costs and transportation cost.

It has nothing to do with any of the capital costs of drilling, building pipelines or fracking.  This is the cash flow a company generates from production.

In Q4 2015, Baytex’s heavy oil operation was making a measly $5.73 per barrel of production.   And remember that doesn’t include the expenses related to running the office, paying salaries or making interest payments.

The Eagle Ford did considerably better as it was able to generate netbacks of $18.77–more than three times what the heavy oil business made.

(That’s still not great, but a lot better than heavy oil.)

You’ll notice in the above chart that heavy oil sells for a much lower price than light crude, because it costs more to get the ‘heavy’ stuff out, like the asphalt.

That heavy oil price is called Western Canadian Select (WCS), and its price is often quoted as a discount to the light oil benchmark price, West Texas Intermediate (WTI).

In Q4 2015 the chart shows that difference (or differential) was roughly $13 per barrel.

As revenues rise the majority of Eagle Ford operating expense rises.  But that’s not the case for heavy oil.

The higher fixed operating costs for heavy oil make it uneconomic at low prices. But as oil prices rise, these costs stay constant—the price of oil really has no bearing on the cost of bringing it to the surface.

In Q4 2015 only 40% of the cost for Eagle Ford production are these fixed operating costs while the vast majority (close to 85%) of the operating expense for heavy oil are fixed in nature.

That’s why you see the IRR of heavy oil surpass that of the light Eagle Ford oil as oil prices rise.  Baytex’s corporate presentation shows how the full cycle economics (which DOES include drilling cost) are actually better at $65 and $70 oil for heavy oil than they are for the Eagle Ford. 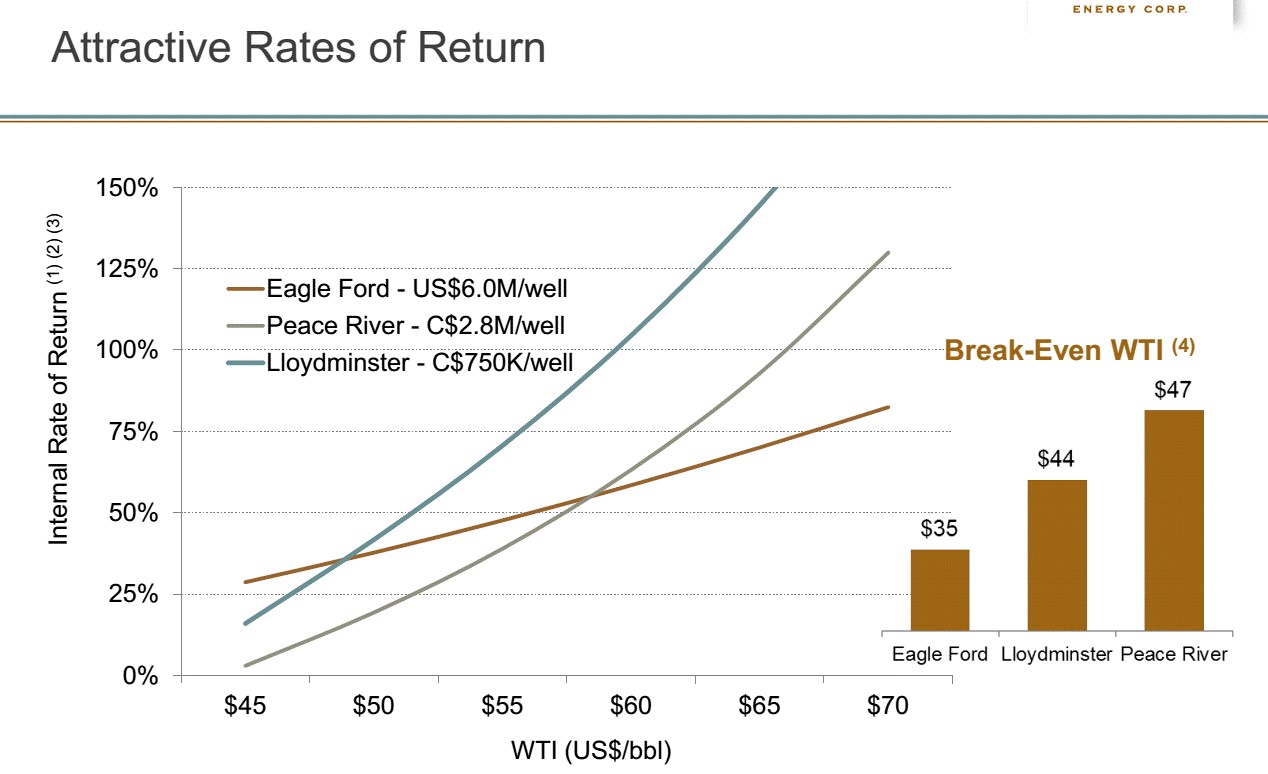 Having a high percentage of your costs fixed is a real stinker when your revenues are dropping.  It creates an ever-tightening margin squeeze until there are no margins at all.

When the majority of your costs are variable you will make less money as revenue declines—but at least your costs will decline in a manner that allows you to maintain profitability.

If You Are An Oil Bull – You Should Get Heavy

The earlier table above showed that Baytex was making only $5.73 for every barrel of production the fourth quarter of last year.  In Q1 2016 Baytex likely won’t even have a positive netback from its heavy oil operations.

That is pretty ugly, and as long as oil prices remain sub $50 it is going to remain ugly.

On the other hand, things get a lot better for heavy oil producers very quickly when oil prices rebound.  You might be surprised just how much better and at what price.

In 2015 WCS averaged roughly a $15 discount to WTI.  If WTI were to get to $75 per barrel and that discount remained at $15, Baytex’s heavy oil netback would look something like this:

These are Baytex’s actual netbacks from 2012/2013 when the company was pretty much a pure-play on heavy oil (before the Eagle Ford acreage was acquired in 2014).

Everything about heavy oil production makes it leveraged to oil prices.  The low variable costs, the high fixed operating costs and the discount to WTI all mean that more of every incremental dollar of revenue turns into cash flow.

At really low oil prices these heavy oil wells don’t look to good.  At higher oil prices (and $70 per barrel wasn’t considered high all that long ago) these wells look really good.

Heavy oil is an awful business at depressed oil prices.  But it’s highly levered to oil prices between $45-$65/barrel WTI.

EDITORS NOTE—Hey, I hope the oil price goes up and investors make bundles of money.  But what if it doesn’t?  Then you’ve got to know THIS STOCK—with the lowest costs, it can still grow—A LOT—at $45 oil.  CLICK HERE to get this best-of-breed company name and symbol.