These Statistics Show A Surprising Oil Hotspot Brewing in America

Guess which American oil play will show the largest increase in production the next two years?  That’s right, I said increase.

Well, defying all expectations of analysts and investors alike, it’s likely to be the Gulf of Mexico (GOM), with production forecast to rise 12% to 1.6 million barrels per day.

And that’s because Big Oil is back in the GOM. 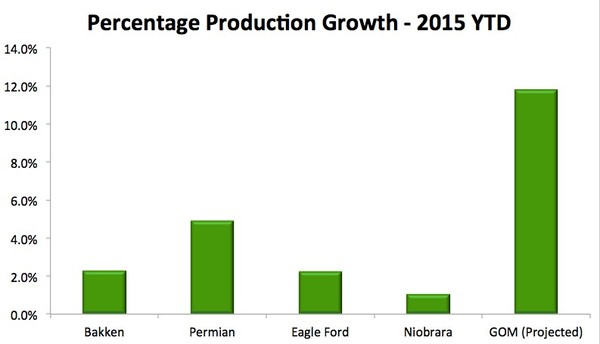 Getting a play online in the GOM—in any offshore play—costs a lot of money.  Low oil prices don’t factor into offshore plays as much.

In fact, the numbers show that the Gulf of Mexico may actually be one of the bright spots for U.S. production growth over the next few years. In a recent analysis, the Energy Information Administration forecast that oil production from the GOM will surpass 1.6 million barrels per day by 2016—a nearly 12% rise from the 1.44 million barrels per day currently being produced from this region. The chart below shows the rise clearly. 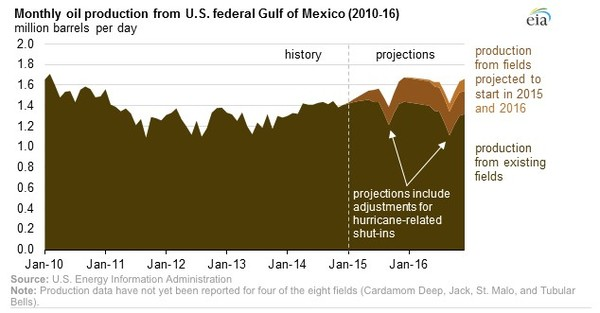 In fact, the Energy Information Administration says low oil prices will have “minimal direct impact on GOM crude oil production through 2016”. The reason being the long lead times involved with Gulf projects.

Unlike with onshore plays like the Bakken and Permian, offshore developers—especially in high-tech and high-cost ultra-deep water plays—can’t just shut things down when oil prices fall.

Simply put, after you’ve ordered hundreds of millions of dollars worth of custom equipment to develop on offshore field, you’re going to put the project online—whether crude is $50 or $100 per barrel.

And there’s a big slate of such already-committed projects in the GOM. A total of eight new fields came online in 2014—and another eight are scheduled to begin pumping in 2015. Add on another five new projects to be commissioned in 2016, and there’s a lot of production coming down the pipe for this region.

All of which means the projected 12% increase in oil production is likely to come in as forecast. And as I mentioned, that’s got a number of the biggest players in the E&P sector excited.

Just look at the results from last month’s Gulf of Mexico licensing round.

When the US Bureau of Ocean Energy Management announced results for its 2015 GOM Central Lease Sale on March 18, critics were quick to jump on the numbers. Overall bids came in at just $539 million for 169 winning applications—down 37% from the $851 million for 326 winning bids seen in the 2014 round. And a number of players in the offshore sector—such as BP (NYSE: BP)—avoided the bid round altogether.

Most investors took this as a sign that interest in the U.S. offshore is waning. Not surprising, given the pullback in capital spending that’s been seen across most of the global oil industry since crude plunged below $50 in January.

But a closer look at the data on the recent GOM lease sale actually shows a more-subtle trend emerging here: Big Oil taking a renewed interest in this established and highly-productive play.

As Platts reported, even though overall bids for GOM acreage were down sharply, per-acre prices paid for leases actually rose. The chart below shows their analysis on going rates in 2015, as compared to a year ago. 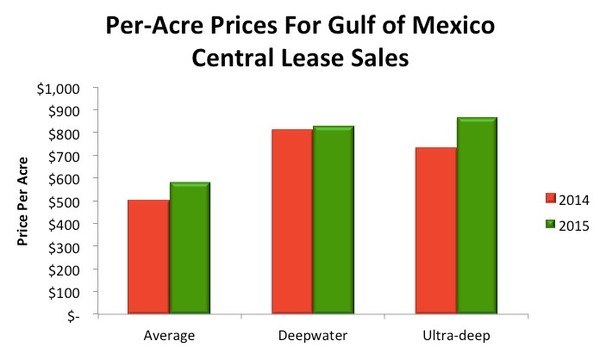 On average, lease prices were actually up 16% to $583 per acre. And certain parts of the GOM such as the high-impact ultra-deepwater segment saw lease prices rise by an even-greater 18%, to $864 per acre.

That interest came from a number of major players including Chevron (NYSE: CVX), ExxonMobil (NYSE: XOM), Statoil (NYSE: STO) and Shell (NYSE: RDS.A). All of whom apparently still see lots to like in the Gulf—even as their brethren in the industry are pulling back.

That may be because “hot” shale plays are starting to cool off.

The fastest-growing oil play in America—the Bakken of North Dakota and Montana—saw output rise about 28% over the past year. The Permian Basin of Texas was close behind at 27% production growth. So the GOM is at least keeping pace in terms of double-digit production growth. 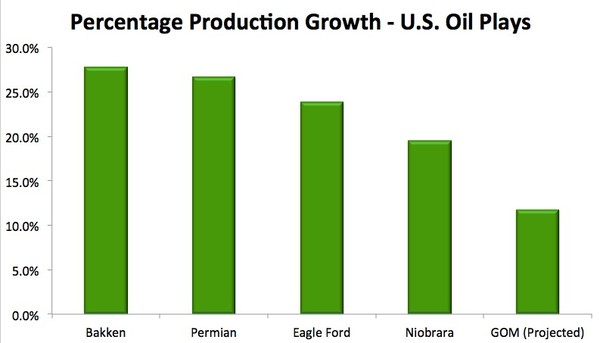 Even more so when we look at numbers over the last three months. As the chart at the outset of this article shows, with oil prices tumbling and drilling budgets being slashed, production growth from big onshore plays has fallen off a cliff so far in 2015. The best of the bunch—the Permian—has eeked out a 5% improvement in output since January. Plays like Bakken and Eagle Ford have nearly crawled to a standstill.

Suddenly 12% growth looks pretty good. In fact, it could mean—against all expectations from investors and analysts alike—that the GOM will be the fastest-growing producing region in America over the next two years.

Judging from the latest lease sale results, GOM stalwarts like Chevron aren’t stopping with the current slate of new developments either. Instead, these regional experts are continuing to aggressively pursue new plays and new discoveries.

That makes the GOM a spot to watch—both for value-creating oil finds for major and junior firms alike, as well as incremental growth from larger E&P players, which may very well take the market by surprise.

Editors Note:  I have bought very few oil stocks in 2015—but they’re all up.  In fact, some are up over what they were this time last year when oil was $100! That’s because in these times I only want to own THE LEADERS—the BEST stocks.  As oil prices continue to move up, the more leveraged stocks will run.  But I want to start my 2015 portfolio with the best stocks.  Get the names and symbols of these stocks RIGHT NOW.