Home Natural Gas What happens when the Marcellus’ Biggest Producer Gives Up?

Sanford Bernstein is a boutique brokerage firm that the Market considers “smart money”.  But I have hard time believing their May 4th call that Marcellus/Utica gas production will jump a net 10 bcf/d by 2018.

My main doubt comes from Chesapeake (CHK-NYSE) as they are in the process of going from 9 rigs in the Marcellus to just one.  Chesapeake is the largest producer in the Marcellus.  When the top producer is forced—for whatever reason—to essentially give up on the play, it’s tough to see how production rises 33-50% in three years.

After producing 2.15 bcf/d from the Marcellus in 2014 or approximately 15 percent of the play’s total, CHK is quickly ramping down activity in America’s biggest gas field.  (Source: http://marcellusdrilling.com/2015/04/envelope-please-top-5-pa-marcellus-shale-gas-producers-for-2014/ )

As you can see from the below table which was taken from CHK’s May 2015 UBS Global Oil and Gas Conference presentation, the company plans to reduce its year end rig count in the Marcellus to 0 or 1 by the end of the year: 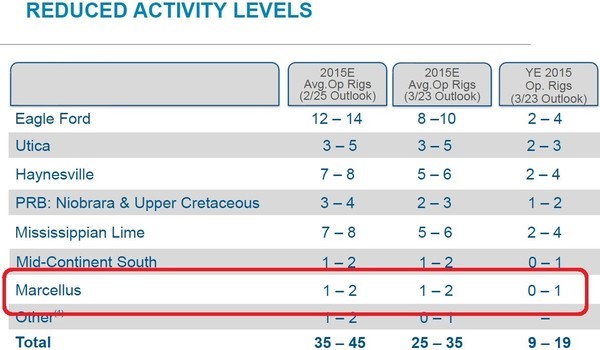 It should surprise no one that CHK has moved the Marcellus to the bottom of its capex barrel for 2015 since the company has already made public its plans to shut-in some Marcellus production until prices improve.

More importantly, with Marcellus gas at the Leidy, PA hub selling for only $1.44 per MMBTU (Aug 5), CHK and its fellow producers are not even covering operating and overhead costs at today’s prices.

While I firmly believe there is a lot of gas left in the Marcellus, it has become increasingly clear from recent production trends in Pennsylvania that material growth from today’s levels will not happen anytime soon.  In fact, if recent data trends continue, it is looking increasingly likely the Marcellus is now past peak. More on this below.

While the EIA and many analysts focus on rising rig productivity and initial production (IP) rates as signs of increased drilling efficiency, I believe this focus is somewhat misplaced since increased efficiency is largely a result of prospect high grading.

A more important measure of the potential growth of a shale play is well productivity. During the early years of drilling, as activity is ramping up and operators are finding the play’s sweet spots and rapidly improving drilling and completion techniques, productivity per producing well rises despite the steep initial decline rates of new wells.

However, as plays mature and operators slow down activity levels, productivity per rolls over and soon thereafter production from the play declines.  This is exactly what is happening in the Marcellus right now. 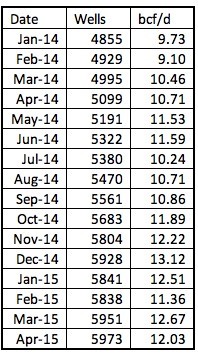 But won’t Chesapeake’s inventory of wells in the Marcellus allow it to offset natural declines for years to come?  Unlikely.  While the company did not disclose the number of Marcellus wells in its inventory awaiting completion in its Q1 filings, I suspect its inventory will be largely depleted by the end of the 2015 given annual natural declines rates of ~600 mmcf/d and the company shutting down its drilling program.

Without a major turnaround in CHK’s drilling plans between now and the end of the year, 2016 could see a steep fall off in the company’s Marcellus production.

Additionally, while there is additional pipeline coming online to service the Marcellus that will alleviate some of the basin pricing differential, at today’s rate of drilling and the rapidly maturation of the sweet spot in Bradford and Susquehanna Counties, it’s possible that much of this new pipeline capacity will never get filled.

Ironically, the Rockies Express Pipeline (REX)–which was recently reversed to carry Marcellus gas into the Midwest–was once expected to flood the East with cheap gas.  However, Rockies gas production began declining soon after the pipeline was commissioned and the pipeline was never fully utilized for its original purpose.

In conclusion–Sanford Bernstein analyst Bob Brackett’s May 4th piece titled “The Gas Shakeout (8): As the Marcellus Impact Creeps Westward, Who Loses?”–in which he predicts Marcellus/Utica gas production will grow a net 10 bcf/d to 23 bcf/d by 2018–seems quite detached from the current reality that I see in the Marcellus.

When a play leader abandons it and stops drilling as CHK is currently doing in the Marcellus, falling production is usually soon to follow.   Stay tuned–things  are about to get interesting in America’s largest natural gas play.