Home Natural Gas The Marcellus is close to Peak Production and why this is so...
By Bill PowersOne of the little spoken truths of the shale gas industry over the past three years has been that most of America’s gas fields are now experiencing production declines with one large exception: the Marcellus Shale in Pennsylvania.And that narrow reliance on one play gets even more concentrated—the North American natural gas market has morphed from relying on the entire Marcellus to provide all of the continent’s production growth a year ago—to now hoping that growth in select Pennsylvania counties will sustain current trends.

Unfortunately, in addition to production declines in West Virginia, Pennsylvania Marcellus production is now in decline in two of its three most prolific counties.

According to 2H 2014 production data from the PA DNR, Bradford and Lycoming Counties, which produced a combined 3.6 bcf/d in 2H 2014, experienced production declines of 3 and 5 percent respectively.

A flattening of Marcellus production will send shockwaves throughout the North American natural gas market.   With US production at approximately 70 bcf/d of which ~58 bcf/d is production from outside of the Marcellus, US production could experience a net decline of 6 bcf/d over the next 12 to 18 months should growth in the Marcellus not pick up and natural declines continue.

Based on state production data in recent months it is easy to see Texas decline 2 bcf/d, Louisiana drop 1 bcf/d with Wyoming, Colorado and New Mexico each experiencing declines of .5 bcf/d over the next 12 to 18 months.  Another 1.5 bcf/d of aggregate declines can be expected from states such Oklahoma, Kansas, Utah, North Dakota, Montana, California and the Gulf of Mexico where drilling activity  is down approximately 40 percent compared to year ago levels.

Sound far-fetched?  A look at the data from both Pennsylvania Department of Natural Resources (DNR) and other important producing states supports the thesis that US natural gas production is headed for a material fall this year.

In this article I will take a closer look at production trends in the Pennsylvania Marcellus as well as developments in other gas producing states to show that US natural gas production is rolling over and there is little that can be done to stop it.

The Monster Marcellus –And EIA Extrapolations

The Marcellus, which has added roughly 3 bcf/d (billion cubic feet per day) of net production in each of the last four years and recently established a new all-time high level of ~12.5 bcf/d, has nearly single-handedly offset production declines in other shale plays and conventional production over this time period.

Some analysts as well as the US EIA (Energy Information Administration) have reported that Marcellus production is already 18 to 19 bcf/d.  But recent data from the State of Pennsylvania resoundingly contradicts claims of such lofty production levels.  Pennsylvania, according to the state’s Department of Natural Resources, produced an average of less than 12 bcf/d during the second half of 2014.

(It should be noted that the Pennsylvania Marcellus accounts for nearly 95 percent of production from the play while West Virginia supplies the remainder.)

So where will the US declines come from?

The state should account for the biggest drop in US natural gas production this year is Texas.  Contrary to recent reports from the EIA that natural gas production in the Lone Star state grew approximately 10 percent in 2014 (Source: http://www.eia.gov/oil_gas/natural_gas/data_publications/eia914/eia914.html ), early indications from the Texas Railroad Commission show a small decline in  production during the year.  The below table shows total production in the state over the last seven years:

There are a couple of important takeaways from the above table. First, despite one of the biggest drilling booms in Texas history over the past seven years—which included the emergence of the Eagle Ford Shale as one of America’s top unconventional plays—2014 gas production was only 6 percent higher than in 2008.

During this period the Barnett Shale peaked and entered terminal decline while the Eagle Ford grew from a standing start to nearly 5 bcf/d and the Permian saw modest gains.  Now that:

Put differently, gas production from oil wells accounted for 24 percent of total statewide production in 2014.  With Texas now relying on oil wells to generate a higher percentage of its gas than it has in decades, the ~45 percent drop in drilling activity over the past year will have a significant impact on both gas and oil production in the state.

Barring a rapid return of triple-digit oil and a corresponding bounce in the price of natural gas, it is reasonable to expect Texas production to drop 10 percent or 2 bcf/d to approximately 20.5 bcf/d over the next 12 to 18 months.

Louisiana production has been falling at a precipitous rate since early 2012 when the Haynesville reached its production pinnacle.  As you can see from the below chart taken from the Louisiana DNR, production was down 18 percent in 2014 compared to 2013 and further declines are in store for 2015 now that the state’s rig count is approximately 35 percent lower: 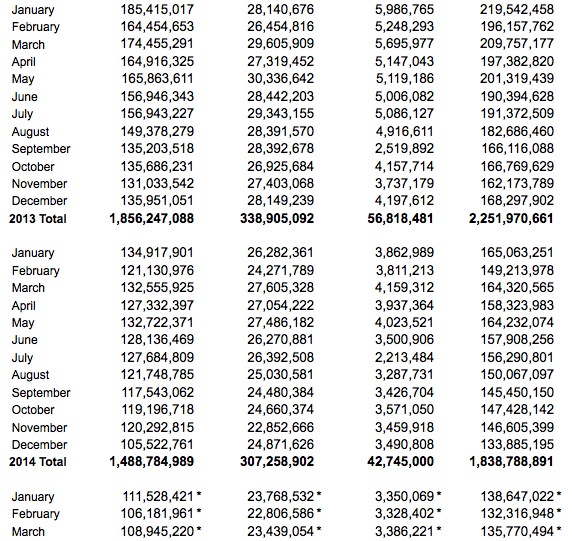 While the drop of 1.13 bcf/d in Louisiana production during 2014 may surprise some industry observers, it was very predictable.  Natural gas production in the Bayou State hit a multi-decade peak in 2011 at nearly 8 bcf/d and has been declining in nearly a straight line since.  As you can see from the above table, current production in the state is approximately 4.5 bcf/d and dropping.

Without a material rebound in drilling activity in state, it is easy to see that annual production could fall an average of 1 bcf/d in the state during calendar year 2015.

If Texas and Louisiana decline by a combined 3 bcf/d, what states will make up the balance of America’s total decline of 6 bcf/d over the next 12 to 18 months?   As mentioned previously, based on well productivity trends and recent state production data, Colorado, New Mexico and Wyoming should each experience a production decline of .5 bcf/d over the year and a half.  Other major gas producing states and the Gulf of Mexico will easily account for the remainder of the expected 6 bcf/d production drop.

Wyoming, where production has been declining since 2009 due to the advancing maturity of the CBM in the Powder River Basin and the Jonah Field, is certain to see an acceleration of declines.

Natural gas production in Colorado peaked in 2012 due to a downturn in activity in the Piceance Basin, the state’s largest producing area, and there is no sign of this trend reversing.  The Piceance, once lauded as an area with “gas manufacturing”, has been left for dead by both EnCana and Exxon while WPX Energy has reduced its rig count in the basin from eight to three in recent months.

What is going on Beneath the Headlines in the Marcellus?

Similar to a teenager who grows six inches during the summer between eighth and ninth grades, the rapid growth phase of the prolific Marcellus Shale has likely ended.  Does this mean that America’s largest gas field will experience immediate and severe production declines? Absolutely not.

However, given today’s current natural gas price environment and the advancing maturity of its highly productive areas, the mighty Marcellus has likely entered a period flat production for at least the next year or so..   Let’s examine the facts behind this prognostication:

Extrapolating recent production growth in US natural gas production into the future is clearly the consensus view and has been for some time.

What most investors forget is that the EIA monthly production model uses data that is 2 years old and even publishes the caveat along with its monthly report that modeling errors occur at time of rapid changes in drilling activity.

The EIA even cites the ramp up in production in the Haynesville as an example of where its model was unable to produce accurate estimates due to its inability to incorporate recent production data.

Like all things that must end, so too will US shale gas production growth.

No longer will booming production from a small sliver of northern Pennsylvania be able to single-handedly offset production declines in US conventional production and older shale gas plays as well as perpetrate the myth that rig counts don’t matter.

Unless it is different this time (and it never is), the greatly reduced gas and oil rig counts will result in lower production and higher prices in both the short and long term.

Lastly, it is not just declining production that will be the source of extreme volatility in coming months–rising demand will help push the US natural gas market to extremes.  With the retirement of between 25 and 50 GW of coal fired power plants that will largely be replaced by gas-fired plants, and the opening of dozens of chemical and fertilizer plants–sharply rising for natural gas prices over the next two years is virtually guaranteed.

Increasing demand at a time of falling production will radically change the landscape of gas market despite the widely held belief that today’s status quo of low prices will continue.

EDITORS NOTE—wouldn’t it be ironic if the energy producers end up being The Big Trade for 2015? The EIA just reported that US oil production FELL in February.  Be prepared for the turnaround NOW—read my report that cover The Top 6 Oil Stocks—3 Conservative Seniors and 3 High-Torque Juniors.  They all have strong balance sheets.  Get all the relevant details HERE.