WHAT DOES AN INVESTOR DO?

This stock is not an OGIB portfolio stock.   But I did enough research on it I didn’t want to think those hours had gone to waste….

I want to tell you a story about two investors I know really well.  One is a chartist, and loves technical analysis.  He buys breakouts, and has done well in the market over the last year doing that.

My other friend spends a lot of time researching fundamentals, trying to find unappreciated stories with unappreciated catalysts, finding stories like Rock Energy at $2.15, and Donnycreek at 37 cents.  One friend lives on my right shoulder.  The other one lives on my left.

Sometimes my two friends agree on stocks, but not always.

Sometimes they even violently disagree, like they do on Quicksilver (KWK-NYSE) right now.

The stock is close to breaking out technically—it had a great up-day today. I confess I do really like the chart.  But it’s not a breakout until $3.80 with volume. 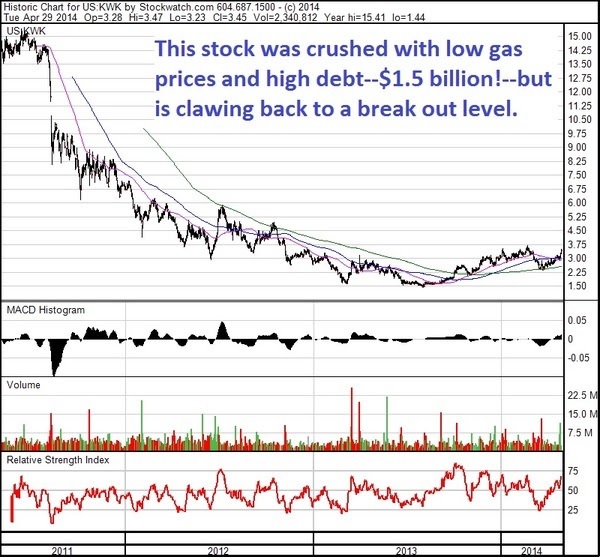 But fundamentally, the company is a bit of a disaster.  I haven’t done exhaustive research on the stock, but it clearly levered up prior to the gas price collapse.  I checked research going over a year and one theme was clear “Reduced estimates on lower production and higher cost guidance”.

Thomson Reuters is showing just over $1.5 billion debt. KWK has been successfully selling assets to get that down—a joint venture in the Permian in Texas, a 25% sale of their Barnett assets in Texas…those two totaled $500 million.

As a result, production continues to decline year after year, quarter after quarter.  They have now hedged 75% of their 2014 production at $5.08/mcfe—million cubic feet equivalent.  (Canadians report in barrels of oil equivalent – boe).  There is also a turnaround on cash flow—they said they broke even in Q4 2013 on cash flow.

But IMHO it isn’t that strong a turnaround just yet.  No, the REAL reason to own Quicksilver is its Horn River Basin (HRB) dry gas play in northern B.C., in conjunction with its LNG (Liquid Natural Gas) asset in Campbell River B.C.—which is only about 100 miles north of Vancouver up the coast, but on Vancouver Island. You can read about it here—www.discoverylng.com

They have said they are going to find and secure a well-heeled strategic partner for this LNG initiative, and the stock may be reflecting that.

I’ve been up to Campbell River many times.  It calls itself the Salmon Capital of the World—well, the Queen Charlotte Islands are, but Campbell River says they are.  Fishing isn’t near what it used to be there.  But the riptides run 11-15 knots at high tide!  You see whirlpools with vertical edges a foot high. There used to be a mine and a mill there too.  It’s a quiet place now.

Quicksilver’s Campbell River site is an old industrial facility, and Quicksilver has plans to start at about 0.75 bcf/d, or 5 million tons per annum (5Mtpa) after all approvals & initial construction is in place—which has yet to happen.  They have the pipeline capacity to get the gas from the HRB (on the Yukon border) down all the way to the US border.  They just have to get it up to Campbell River.

Without it this LNG idea being executed….well…the company is almost all natural gas and has a debt to cash flow ratio of about 8.5:1.  Eight point five to one.    ALL the analysts have price targets LOWER than where the stock is today.   KWK has 172 million shares out.

So as you can appreciate, there are a lot of shorts all over this one—

Quicksilver’s HRB wells are very prolific—up to 20 mmcf/d for IP rates.  The wells likely cost a bit more than the Montney but are getting twice the dry gas rates—and if gas can stay in the $4.50-$5/mcf range this year, the economics on these wells could be fantastic. 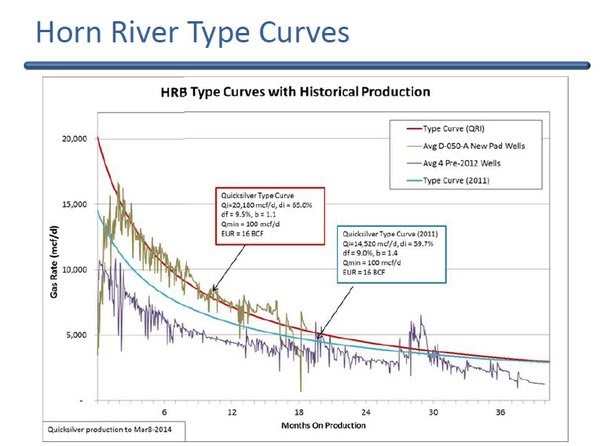 The Market is expecting an LNG or HRB joint venture in the next 1-2 months.  This has been in the analyst reports for a full year; everybody knows it’s coming.

But the stock is suggesting somebody thinks they know something right now.  My one friend says the chart looks good—at $3.80 with volume it looks great.  But my second friend says without a pretty rich LNG deal, the company’s future doesn’t.