Why It’s Different This Time

Is this downturn in oil prices going to be different for investors?  I think it might.  In fact, I think North American energy companies have a good chance of withstanding this downfall in prices than any other downturn of the last 40 years.

You wouldn’t know it by looking at the recent carnage in oil stocks—especially the juniors and intermediates, which are off 30-50% in 6 weeks. This is severe, but is not without precedent. (In fact, once OPEC starts squabbling, history says oil prices drop 50% or more.)

But there is an argument that North American industry cash flows won’t be affected as much as the Market is now pricing in.  Nor will multiples.

Could it be true—could it be different this time?

Normally, retreats in the oil price due to OPEC bickering is a very painful period–because in energy stocks, not only do fundamentals deteriorate, Price-to-Cash-Flow multiples contract—that’s a double whammy for investors.

To illustrate–my experience is that the average operating costs for North American oil is about $40/barrel.  Now, that’s operating cost; not all-in (finding, developing and operating) cost.  So at $100 oil, that’s a $60/barrel gross profit.  When oil drops to $80/barrel, it’s a 20% drop in price but a 30% drop in gross profit.

The Market gives a higher multiple to more profitable companies.  As the oil price has dropped in the last two months, this chart from Canadian brokerage firm BMO Nesbitt Burns shows how multiples have already contracted: 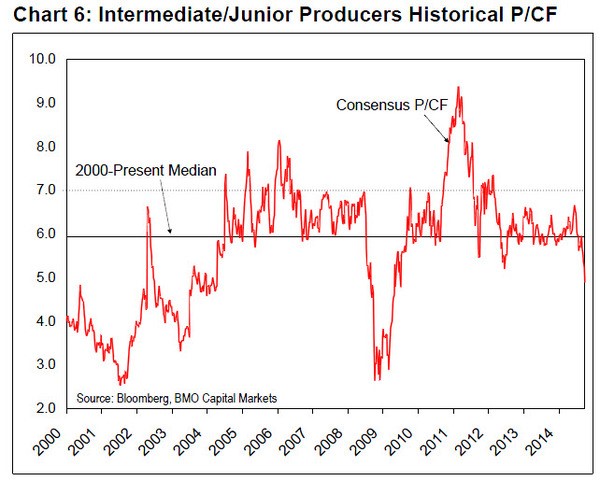 But there really are a couple things different about the North American oilpatch now than at any other severe oil price downturn:

1.     Everybody has LOTS of land and drilling inventory—literally years, and sometimes even decades of low-risk drilling.

This means a couple things.

a)     E&P budgets no longer have to spend 40% of cash flows on high priced land grabs, which they have been doing for 10 years now.  So that’s a 25-40% increase in cash flows that can start happening if times get tough.

I wrote a story on this earlier this year, based on a report by US brokerage firm Raymond James, which you can read HERE. http://oilandgas-investments.com/2014/oil-and-gas-financial/free-cash-flow-should-energize-your-oil-and-gas-portfolio/

b)    And it’s not just that producers have lots of land—their drilling inventory is expanding—for free, due to “downspacing”.  Think of the space between wells in a big field.  The industry is moving from four wells a square mile to eight—and in some cases 16 or even up to 32!

That’s because the industry is finding they can frack wells much closer together than ever before thought possible without impacting the flow rate of other nearby wells.

On an NPV basis, the wells you aren’t going to drill for 20 years become meaningless—and a potential source of cash for producers in a free market.

2.     Improvements in drilling and fracking continue to improve returns.

a) In fracking, there was a step change in the summer of 2013 as EOG and Whiting—two large independent producers in the US—started using smaller, more tightly spaced fracks.  In essence, they used short wide fracks instead of long skinny fracks—and production increased dramatically.  The entire industry is now moving in this direction.

b) In drilling, a recent improvement is extra-long horizontal drilling—up to 2 miles—that are improving rates by 50-100% with only a 20% increase in costs.

c) The industry is moving to big “pad” drill sites where multiple wells can be drilled from the same place, in a circular or fan formation out from the well.  This is reducing drilling costs.

And the last point is—the Market always pays up for certainty/visibility of cash flows.  Economics are obviously important, but so is long term stable cash flow—no matter how big or small it is.

For the first time ever, the North American oil industry has a high certainty of how much oil they can produce for the next 20-30 years—just insert a specific oil price.

Every other time that OPEC has squabbled and sent prices down, the US and Canada were chasing conventional oil pools with short reserve lifes—but not this time.

That’s not good for everybody, but it is for the low cost producers.

Look at the stock charts of Canadian natural gas producers Peyto Explorations (PEY-TSX) and Tourmaline (TOU-TSX)—production grew and so did the stock price, in a very low gas price environment.   But the stock didn’t move up until the commodity price bottomed in April 2012.

The negative side of this argument however, is that the Saudis need to see oil under $60/barrel to really inflict pain on North American producers.

And until the oil price finds a bottom, none of these arguments are going to matter.

Previous post: The Greatest Contrarian Call in the Oilpatch Today