Home Energy Services This Is The Best Sector For The Next Decade, And This Might...

The Energy Sector is having a RED day; a down day as oil prices re-trench.  Oil is supposed to do that at this time of year–the shoulder season between summer driving season and winter heating.

But it always makes me re-think my investing strategies.  So right NOW–if I had to–where would I put ALL my money?  Easy question.  I wouldn’t need five seconds to think about it–the North American Energy Services sector.

This isn’t a new idea. Most of these stocks have had Big Runs in the last couple years.  So when I find a junior stock doing over $100 million revenue, with a very normal 15-20% EBITDA margin, less than 20 million shares out and where the Chairman owns 33% of the stock—and trading at a discount to its peer group…well, I get excited.

Look at Aveda Transportation and Energy Services, symbol AVE-TSXv.  I bet you’ve never heard of it. They move drilling rigs all around North America, from pad to pad in one field and field to field in a play.  Based in Calgary, they do 85% of their business in the US—so when you look at the trend of a higher US dollar hurting the energy sector–this is a stock where the lower Canadian dollar is a great tailwind.

You don’t need to be Warren Buffett to figure out that energy services companies are in the catbird seat.   Horizontal drilling has revolutionized and re-invigorated the North American energy business—but those wells decline fast—70% in the first year.

That means a huge number of wells need to be drilled just to maintain production and even more if we want to grow production.

In 2014 RBC Capital Markets estimates that 20,061 horizontal wells will be drilled in the United States alone, and in 2015 that number grows to 21,551.  On top of that American activity, horizontal drilling in Canada is going to accelerate as the deep Duvernay formation hits development mode and LNG export related drilling in the Montney and Horn River plays in British Columbia hits a frenetic pace.

Energy services companies aren’t going to just enjoy huge volume growth, they will also be able to charge premium prices for years to come because their services will be in short supply.

Aveda has so far slipped under the radar of almost all institutional investors.  Until this year trading volume on the stock was so low that most institutions wouldn’t have been able to build a position even if they wanted to.

That is starting to change as the company is increasingly being recognized and daily trading volume picking up.    18 months ago the stock traded 5,000 shares a day traded—now it’s over 50,000.

Aveda gives shareholders a lot of leverage to rising cash flow—because there is only 19 million shares outstanding.  That also means the stock is a thin trader.

Chairman Dave Werklund owns 33% of those shares.  Few people outside of the oilpatch would know Werklund but this man has a huge success behind him–in  1984 he founded a small oilfield service company called Canadian Crude Separators (CCS) with an initial investment of $50,000.

By 2007 CCS had become a huge company with $3.7 billion in annual sales.  Today it is part of a rebranded group of companies called Tervita Corporation which does more than $5 billion annually.

There aren’t many companies the small size of Aveda that have the full attention of a businessman like Werklund.

Werklund is only batting in the first inning at Aveda, and he has already created the largest pure-play drilling rig company in North America.  Aveda’s job is to move drilling rigs and other equipment between drilling sites.

Aveda estimates that each drilling rig moves 17 times a year and than in 2014 there will be 35,700 rig moves in North America.

Werklund isn’t the only competitive edge I see in Aveda.

You see, the biggest trend in this space is safety. Safety sounds boring, but it’s incredibly profitable for Aveda—they have established themselves as the standard for safety and speed.

Anyone who knows trucking knows there are a lot of “mom-and-pop” operators out there.  And I’m sure many are good.

But the reality is that the larger producers who now dominate the Shale Revolution are not going to entrust their $30 million rig to a mom-and-pop who doesn’t have the insurance, the safety, and the standardized procedures to get rig moves done.

That’s why Aveda isn’t known as the cheapest operator, but rather the one with biggest, safest and fastest equipment.  Aveda is the high quality operator and so its customer list is mainly the largest producers in the business.

And all this feeds on getting higher quality employees.  And if there’s one thing I’ve learned about the energy services sector—that business is all about HR; Human Resources.  Get the best employees and pay them well.

Aveda has the staff, training and safety to get rig moves done faster—often a lot faster—than smaller operators.  That means less rig downtime which means lower costs and larger profits.  For that customers are willing to pay a premium rate to Aveda.

The good news about all these “mom-and-pop” operators is that they are undercapitalized, and there’s LOTS of them.  This fragmentation means the industry is ripe for consolidation.  That should present some interesting growth opportunities for Aveda.

Management is pretty open that their M&A pipeline is full.  That doesn’t mean any of them are close, but there’s lots of opportunities.

It’s interesting that their two latest deals—which have doubled the company—have come from larger companies.  They bought Precision Drilling’s (PDS-NYSE; PD-TSX) equipment in the US—and PD is one of their big customers.
They have already generated organic growth out of the PD deal, opening up a new branch in Oklahoma right away.

The larger M&K acquisition in January 2014 is almost fully integrated, CFO Bharat Mahajan told me, and they expect organic growth to start from that in late Q3 and Q4.  Analysts are suggesting just over 15% of growth this year will be organic.

They have only added debt to do acquisitions—Precision was 100% debt, and the other ones used partial debt–roughly $55 million they have just over 2x debt to trailing cash flow.

Aveda trades at just under 5.8x Enterprise Value to cash flow. The peer group is 7.1x average.  I would expect Aveda to trade just over peer group because it has a surprisingly low cost of capital; maintenance capex for them is incredibly small.  Annual capex is only $13 million.

What I expect to happen in the coming months is for the discount that Aveda trades at to its peers to slowly disappear—while the company grows, which should give investors a slingshot share price. 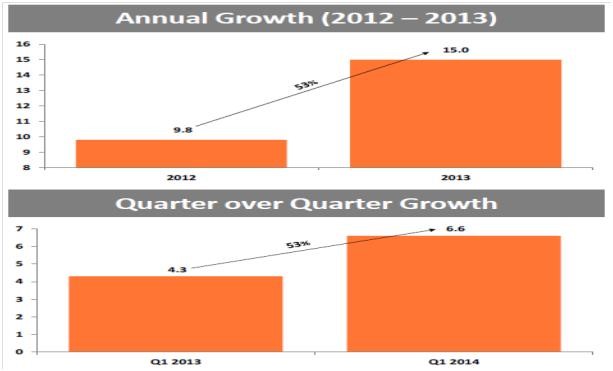 That discounted multiple is not related to a lack of growth, it is simply due to a lack of attention.  Year on year Aveda’s EBITDA has grown by 53%, and I would expect that rapid growth to continue both organically and through acquisition.

Acquiring some of the smaller undercapitalized private operators could be very accretive for Aveda as these deals can get done at less than 4x EBITDA.

As Aveda integrates the M&K deal and starts generating stronger organic growth, there’s an opportunity for investors to see a double whammy of valuation multiple expansion and higher overall revenue and EBITDA growth.

They’ve got proven management and critical mass in a tight niche—they can dominate larger scale moves.

Right now, the energy services sector is my favourite place to invest and within that sector Aveda is one of the best stories investors have never heard of.