The Only Oil Price Going UP in the World Right Now

Here’s a current chart of the oil price you probably don’t recognize: 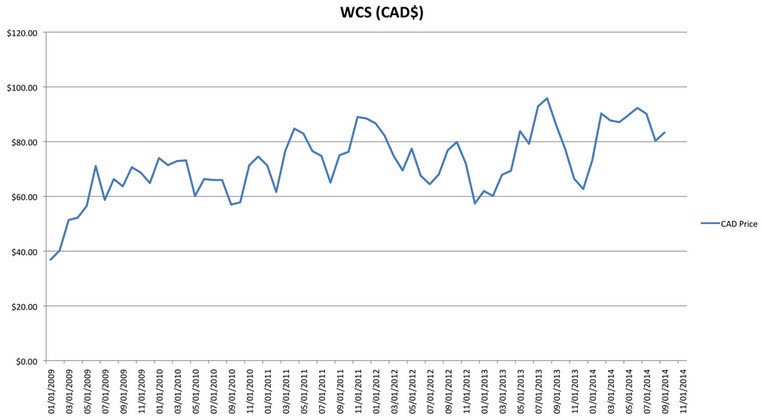 This is a custom built chart of Canadian heavy oil prices (Western Canada Select–WCS)—in Canadian dollars. (Canadian dollar charts are hard to find!).  This chart takes into account the lower Canadian dollar against the greenback.  It shows that heavy oil producers aren’t hurting—in fact, they’re getting some of the best prices ever in the last five years.

But that hasn’t helped their share prices. Oilsands and heavy oil producers have seen their stocks drop 30% or more in the last few weeks—the same as everyone else.

The weak Canadian dollar shielded just under half the drop in oil prices for producers in the Great White North.

At the start of 2013 the Canadian dollar was at par with its American counterpart.  What that meant was that for every US dollar of barrel sold Canadian producers received one Canadian dollar.  Today one US dollar is now worth $1.125 Canadian.  If WCS prices are at $70 US per barrel that means that heavy oil producers would receive $78 Canadian.

But the other reason for the strength in heavy oil is strong demand and better access to market. That is reducing the discount that heavy oil prices get around North America.

It could mean that heavy oil stocks are the best place for energy investors…but not yet.  There is no emotion in upstream E&Ps until the oil price finds a bottom.  And only God and Allah know when that will be.

But stronger demand for heavy oil should be a long term trend.

Investors hear all the time about the Shale Revolution—but that’s high quality light oil.  But the US refinery complex has been moving to produce more lower quality heavy oil for a decade. Just this year, BP’s Whiting Indiana refinery finished  switching from 70%  light oil to 70% heavy oil—despite being so close to Bakken light oil in North Dakota.

Until tight (or shale) oil became economic, the crude slate the world over was getting heavier.  And the oils are so different that you can’t put light oil in a heavy oil refinery and make much money.

But US refineries also want heavy Canadian crude for economic reasons—it has been VERY cheap in the last few years.  Another way the industry says this is—WCS has a big discount to WTI, or West Texas Intermediate, the US light oil benchmark price set in Cushing OK.

Heavy oil should have a discount because it costs more to refine than light oil—the “heavy” in heavy oil means asphalt and other products are in the oil and have to be removed (they get used for paving roads across North America).

But refineries are more concerned  about the discount from Brent—the international benchmark price out of London England.  All the refined products like gasoline get sold on Brent pricing (or whatever benchmark is highest at the time).

As fast growing production from the Shale Revolution overwhelmed US refineries in 2011-2013, the WTI price dropped from even with Brent to $20/barrel below!  But increased refinery runs, refinery expansions and crude exports to Canada have brought that down to a $2/barrel Brent-WTI discount lately.

It’s easy for that Canadian dollar chart of heavy oil to go up when it starts at low prices like that.

Thanks to oil by rail, that discount has stabilized at much lower levels in 2014 and is now at its lowest levels in recent memory.The Market is predicting that the WCS “differential”, or discount, will stay low.  Current strip pricing shows the WCS discount going from under $15 today to around $20 by the end of 2015 and staying there longer term.

Crude-by-rail will continue to be key for heavy oil as more pipeline capacity has become so political. Few people could see how quickly rail has rescued heavy oil producers.

Rail uploading capacity in Canada is now 600,000 barrels per day.  That is expected to nearly double to 1.1 million barrels per day by the end of 2015.

There has been a lot of positive news for WCS pricing just in the last week:

Another big factor increasing profitability for heavy oil producers is lower condensate prices.  Condensate is a very light oil that is used to dilute the gooey heavy oil so it flows better in pipelines.  In Canada it usually trades $3-$5 above the Canadian light oil price, called Edmonton Par.  Condensate trades lock-in-step with light oil, so it is down 25% to $76/barrel since July.  That reduced blending cost goes directly to increased netback–profit per barrel–for heavy oil producers.

The conclusion here is that market forces are actually raising Canadian heavy oil prices AND lowering costs—completely against the grain of every other hydrocarbon in North America. Despite all the volatility, heavy oil producers continue to generate cash flows ABOVE their 2014 budgets.

It’s counterintuitive, and it could be a huge opportunity for investors—but when?

Next post: Is US Oil Production Set to Plummet?