I’m a retail investor and I make retail trading mistakes.  I get nervous too early…even on stocks in which I have high conviction.  Sometimes I skim press releases I should really read in-depth.  Multi-tasking during research is not a good idea.

It happens to all of us at different points in our investing lives.

When we don’t do enough left brain analytical work, our right brain emotions can take over, and we become swayed by headlines and CNBC, and make irrational decisions.

Energy investors are especially susceptible to this now, in springtime, the shoulder season in the energy sector, when commodity prices soften and greed turns to fear.

A good example of this is the April 30 headline by a company I cover called Pacific Ethanol—PEIX-NASD.

The stock tanked on May 1, despite the company announcing record cash flow, record debt reduction and the re-start of an idled ethanol plant.

All that information was even in the upper highlight section at the top of the news release.

How could record cash flow and debt repayment turn into a $0.69/share loss?  It was a non-cash item, a $35.8 million “fair value adjustment” to some outstanding warrants.

It’s hard to believe, but the fact that the stock tripled from $5-$15.59 during the quarter caused the problem.   There were several million warrants outstanding with a strike price of $7.75, and accountants say that warrants are a liability to a company when the share price moves above the strike price of the warrants – which is the fixed price warrant holders can pay to buy shares.

With most of the five million outstanding warrants having a strike price below $8/share, accountants saw Pacific Ethanol as having a massive liability, potentially selling millions of shares to warrant holders for roughly half of market value.  I am not making this up.

Of course, shame on management for not putting in an adjusted EPS headline.  But the moral is headlines move stocks, even though headlines often give the wrong impression.  And all the real data was in a highlight section, in bullets, right at the top of the page.

It would have taken 5-10 seconds for investors to understand the real story. 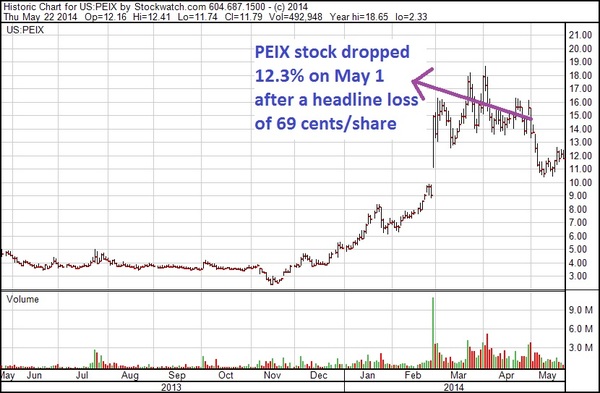 The stock has slowly recovered.  Pacific Ethanol is trading at 2X annualized EBITDA and effectively has no net debt, but what are the prospects?

Ethanol companies turn corn into gasoline.  Right now PEIX is buying corn at under $5/bushel, then spending $1.30/bushel moving it to their ethanol plants on the West Coast, for a delivered cost of $6.30/bushel.

Visit us at booth #235 or attend the Diversified Watchlist Panel on Monday,
June 2nd from 1pm-2pm

Wholesale, or rack gasoline sells at $3.00/gallon, while ethanol in California typically trades close to gasoline prices.  California is short ethanol and must pay higher prices to bring it in from the Midwest.

Ethanol typically trades at a $.60 per gallon discount to gasoline in the Midwest.  Add $.35 per gallon costs to move it to California, and west coast ethanol trades $.25 below gasoline, or $2.75 in the current environment.

That’s not bad for a $280 million market cap company.  And they are now effectively net debt free—delevering the story gives the stock more upside.

The story gets better: there are shortages of ethanol nationwide due to exports, which have caused California prices to trade ABOVE gasoline prices.

PEIX also sells distillers grains, a byproduct of production, at a premium in the animal feed market.  Drought-stricken California is what we call a “feed-short” market.

The futures market for ethanol is suggesting very strong margins in the Midwest through the end of 2014 (ranging from $.37 to $.68 per gallon, depending on the month and averaging $.51 per gallon through year end)

And the latest agricultural data (http://usda.mannlib.cornell.edu/usda/current/CropProg/CropProg-05-19-2014.pdf) is showing corn plantings improved to 73% this week (just below the 5 year average of 76%), and the two big corn states, Iowa and Illinois, are both 84% planted.

That should be Game, Set and Match for lower corn prices in 2014. Assuming corn stays at $5 or lower (the USDA forecasts corn prices will trade between $3.85 and $4.55 per bu over the next year) and gasoline stays at current levels, PEIX can make 50 cent/gallon plus margins as far as the eye can see.

But on April 30, all that quality data—good left brain information—didn’t mean anything.  A retail driven stock succumbed to a bad headline and investors who didn’t take 30 seconds to learn the real story.

It happens to the best of us, doesn’t it?

P.S. One reason ethanol stocks have done so well is high gasoline prices.  That’s a function of high oil prices, and that’s why oil stocks have been the best place to be so far in 2014.  There is one stock head and shoulders above the rest—new discoveries, fast growth and incredibly profitable wells make it my #1 Oil Stock for 2014.  Click here to find out what it is.

AUTOMATION IS COMING TO CANNABISLOWER COSTS COULD DRAMATICALLYREDUCE COSTS / INCREASE CASH FLOWS  You and I have had an incredible year with the...