The Duvernay code has been cracked, and Canadian analysts are racing to update their financial models. It’s one of the biggest plays in Canada, and in a very short time it has gone from a very expensive science experiment to a money making play.

“Recent results indicate IP30s have doubled, with much higher liquids yields,” says Chris Theal, Chief Investment Officer at Kootenay Capital Funds in Calgary. “I would say the rate of change in IP rates has been so significant, that investors should dismiss well data on Duvernay wells older than six months.

“The last time we saw a rate of change in productivity and efficiency this big was in the Viking oil play in the fall of 2012—which triggered a very active M&A cycle. I expect that to happen in the Duvernay now, especially in the Kaybob area.”

In the two years prior to these results, the industry had spent well over $2 billion developing the play—and there was literally just one well in the public domain, by Athabasca Oil, that gave me any reason to be excited.

But now —it could quickly turn into the Eagle Ford of Canada.

The Duvernay is a play that, when OGIB wrote about it in the summer of 2012, was so new that the jury was still out on whether it would sizzle or fizzle.

It’s now attracting some VERY big names. Chevron (NYSE: CVX) announced in late October—in a stand-alone release no less—that they completed 12 wells in the Duvernay, says this could be a world-class play.

The Duvernay is the single most important play in Canada for 2014 for two reasons:

And the deep Duvernay—which is still costing $11-$15 million a well—is all about condensate. Chevron reports that its Duvernay wells are producing up to 1,300 barrels per day of condensate.

That’s a huge output for liquids. High profile plays like the Eagle Ford don’t put out that much—EOG Resources’ (NYSE: EOG) average initial production rates for its Eagle Ford acreage are running about 1,225 barrels per day in 2013. And the product EOG produces is mostly crude oil.

The Duvernay produces condensate—a liquid that in Canada currently sells at a 10% premium to crude. And commands an ultra-low 5% royalty rate under Canadian rules—compared to up to 25% for condensate from the Eagle Ford or Marcellus.

Why is this happening now? From the press releases and research I’m reading, there really is no special magic bullet here—the code is being cracked by the same ways other formations are increasing production—by:

Here’s how it breaks down.

The analysts estimate that in the “Tier 1” areas of the Duvernay, a $12 million well will initially produce at over 1,100 barrels of oil equivalent per day (judging from Chevron’s numbers, rates may end up even higher). The total production over the well’s life will approach 1 million BOE.

The real kicker in terms of value is that 60% of the output is oil and natural gas liquids like condensate. Depending on production rates and gas prices, the net present value of one of these wells ranges from $8 million to as high as $27 million.

The most eye-catching finding from Dundee is the return on investment from drilling here.

The analysts calculate that the average internal rate of return on wells in Tier 1 areas of the play is 142%. Triple digits?

That kind of payback on capital would put the Duvernay as the most profitable play in Canada—and possibly in all of North America. 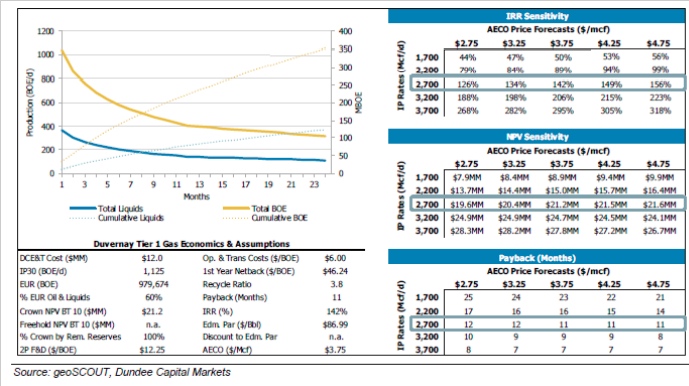 Land prices for Duvernay rights are reflecting these profit metrics. A recent analysis from TD Securities shows that Duvernay acreages seem to be tracking the same escalating path seen the last few years in hot areas like the Eagle Ford and Bakken.

Note the rapidly rising land price trend in the chart below from TD (Duvernay sales are the green triangles). Prices here look to be going up even quicker than their high-profile U.S. counterparts did. 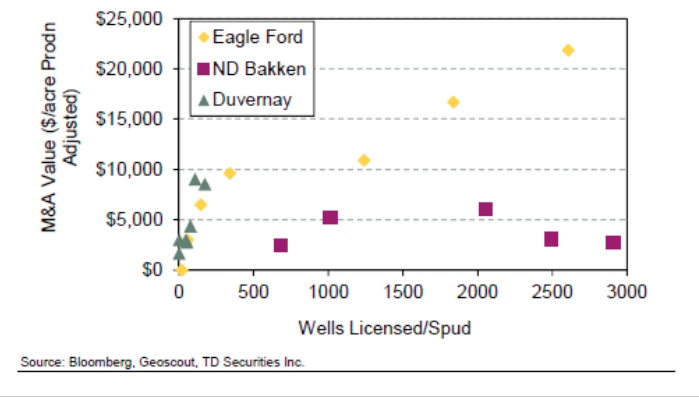 One of the most revealing things about the Duvernay potential is who is doing the drilling today. As the chart below from Peters & Co. shows, the torch has firmly passed from the juniors who pioneered the play to majors and super-majors. Today it is Shell, EnCana, Chevron and XTO who are leading the charge with the drillbit. 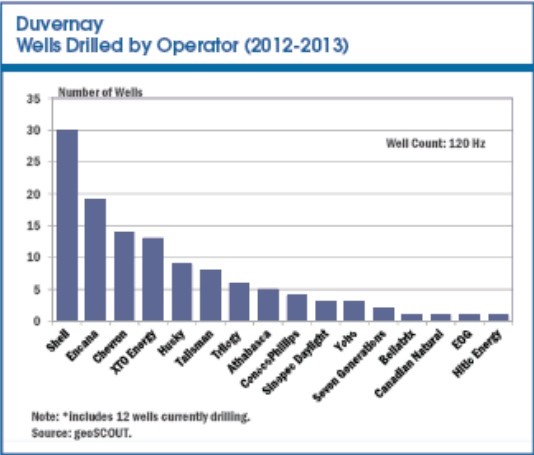 The liquids-richness of the Duvernay is almost certainly the big thing attracting these large firms to the play. That’s the kind of “kicker” majors are looking for in today’s depressed North American gas market. In fact, prolific condensate production from the Duvernay may be coming at a perfect time, in a perfect place.

That’s because one of the major uses for condensate in Canada is for diluent in pipeline transport of heavy oil. That demand is only getting bigger. Look at developments like Suncor’s Fort Hills oil sands project. Last week the company announced a positive production decision on the 3.3 billion-barrel project. Plays like this are going to add a lot of heavy oil supply to pipelines over the next several years—and need a lot of condensate for diluent.

That growing demand should mean strong condensate pricing in Alberta. And great economics for Duvernay wells like Chevron is reporting.

Yes, condensate supply is going to grow—possibly by several hundred thousand barrels a day. That would represent a big jump from the ~125,000 b/d of condensate that Alberta currently produces. Demand for diluent is strong—currently running over 300,000 b/d.

And this need is expected to grow to over 900,000 b/d by 2022 as more oil sands projects come online. The chart below from Alberta Energy Regulator shows a notable and growing gap between condensate supply and demand. 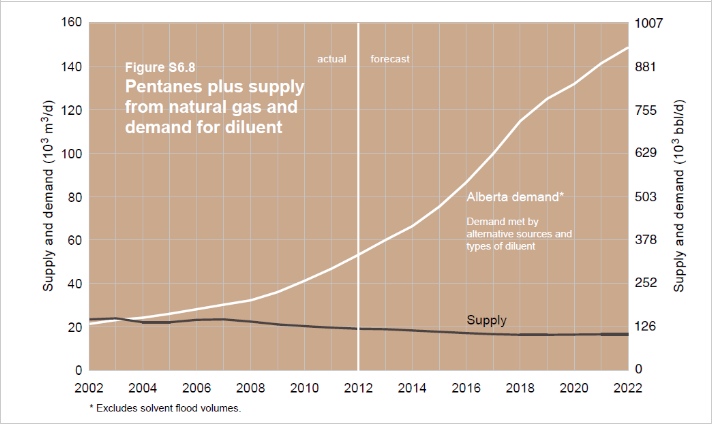 That should be enough demand to keep prices relatively buoyant…

Perhaps not at the lofty levels producers are enjoying today—but enough that Duvernay wells will still be turning a decent profit.