Last week I looked at breaking developments that suggest the Duvernay shale may be the most profitable play in Canadian history.

Consider just two points on the play—hot off the press at a tight-knit gathering of Duvernay insiders put on by TD Securities in Toronto a few weeks ago: 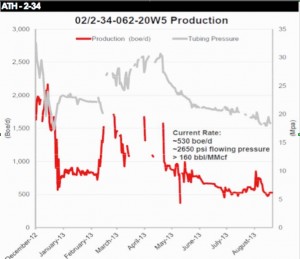 Numbers like this are creating a lot of excitement.

Like the Viking oil play in 2012, fat returns from drilling here may be setting the stage for a big round of M&A in this acreage—to the tune of millions or even billions of dollars. We’ve already seen that international plays are willing to put up that kind of money for Canadian shales—just look at Progress/Petronas paying $1.5 billion this month for Talisman’s (TLM-TSX) Montney land package.

The question is: which companies are best-positioned to benefit from Duvernay profits?

A Sneak Peak At Financial Returns

There’s two parts to this. Firstly—who’s drilling right now and starting to get a bump from Duvernay production in their cash flow numbers? Then—who has the land holdings to scale drilling out and offer the kind of “factory” that incoming majors want?

In terms of financial results, it’s still early days for the play. You’d expect drilling results to start having a material, bottom-line effect only for the smallest, least-diversified juniors here—the ones most exposed to Duvernay production.

The company that fits this bill is Yoho Resources (YO-TSX Venture). This small developer today gets about 30% of its overall production from the Duvernay.

Financials from Yoho are thus an important indication about Duvernay profitability. And so far they look pretty good.

In 2012, the company spent just under $35 million in the field and added about $58 million in proven and probable reserves. Overall, each dollar spent created about $1.70 in 2P reserves value. That’s very good—not quite the 140% returns some analysts have modeled for the Duvernay, but we may not be fully seeing yet the effect of recent wells.

Other, bigger players in the Duvernay like Athabasca Oil (TSX: ATH) and Trilogy Energy (TSX: TET) have yet to show much bump in profitability from their drilling here. Both companies saw returns on their invested capital in 2012 come in negative (victims of the higher costs that are hampering the industry).

But these firms may simply need more time for the Duvernay to trickle through to their bottom line. Both have significant operations outside of the play, which are likely affecting their stats. And a lot of their best Duvernay wells have been drilled only during the past year—we’ll need to look at the new reserves evaluations that come out early in 2014.

The Leaders in the Land Rush

But let’s assume for the moment that phenomenal early drilling results like the ones mentioned above are going to make the Duvernay a profitable play. Which companies have the land positions to develop it at scale?

The chart below from TD shows the top 10 Duvernay land holders. These holdings span three different core areas in Alberta for the Duvernay—from north to south, Kaybob, Edson and Willesden Green. Locations are shown in the map from TD. These land holdings are dominated by majors—with the smaller end represented by Athabasca, Vermillion (TSX-VET) and Trilogy. 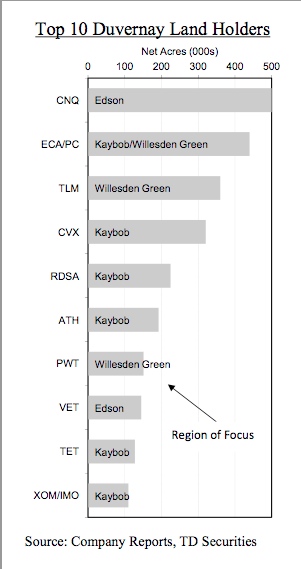 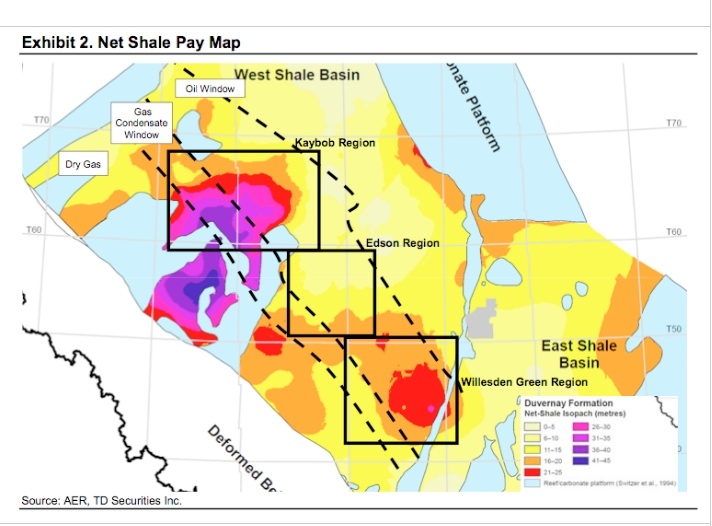 But it’s obvious from the map above that not all acreage is equal. The thickness of the Duvernay (what geo-wonks call the “isopach”) is much greater in the Kaybob area than the other cores (the purple sections are the thickest). Companies drilling in Kaybob get up to 30 metres more shale pay than those in Edson and Willesden.

One key factor appears to be making the difference: natural gas liquids.

That’s important because liquids are the main driver for gas drilling in North America today. They are why producers can still make a profit at $3/mcf gas in Canada.

For the Duvernay, liquids are especially critical—because the play produces mainly high-value condensate, which right now in Canada sells for a 10% premium to crude oil.

This condensate output is the key to the Duvernay’s outstanding well economics. The Athabasca 2-34 well that cash flowed $11 million in 8 months has seen average condensate production of 377 b/d. The big EnCana 8-5 well is the best liquids producer so far drilled in the play (at least that we know about), at 501 b/d of condensate.

Both of these wells were drilled in the Kaybob area—where EnCana and Athabasca are focused. Liquids production here looks to be significantly higher than in the other Duvernay operating areas.

Research from Canadian brokerage boutique Peters & Co. shows that the best liquids-producing wells in the Willesden area are only doing 140 b/d—less than half of what the good Kaybob wells are putting out.

This might be why big landholders in Edson/Willesden like Penn West (TSX-PWT) are putting their acreage up for joint venture rather than drilling it themselves.

The Best Producers in the Best Part of the Play

So, who are the leaders in the liquids-rich Kaybob area then?

Again, you need to look beyond the raw acreage numbers—to see who is in the right part of Kaybob. In this case, the liquids window.

As the map below from Dundee Capital Markets shows, the Kaybob area is oil-prone to the northeast, and produces dry gas (no liquids) to the southwest. Only in the central portion (between the two dotted black lines) does the Duvernay produce liquids-rich gas. Of course, the lines are approximate—I’ve circled in blue the approximate area that’s so far seen wells with high average condensate production of a few hundred barrels per day. 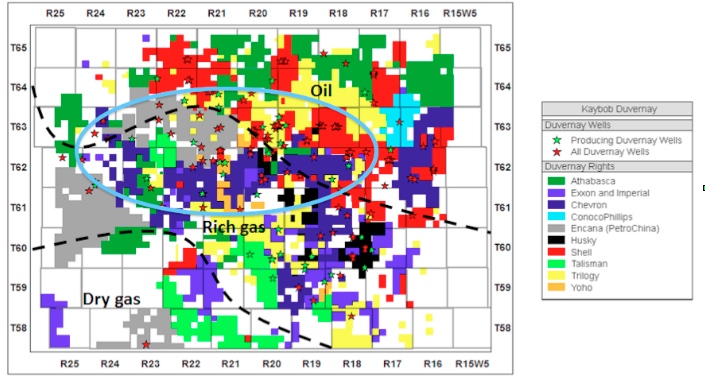 Looking at it this way changes the picture a lot.

A big landholder like Athabasca looks great on paper—except that most of its holdings (shown in dark green above) are in the oil-prone part of the Duvernay. The jury is still out on the oil window thus far. This could prove profitable too—but the big numbers on economics we’re talking about are for liquids-rich gas wells. You have to make sure you’re comparing apples to apples.

Athabasca did have the big 2-34 gas well. But this was drilled on one of only a few sections of its land that push south into the liquids-rich window.

Exxon/Imperial have also missed the spot to some degree. Although these companies have scattered holdings in the liquids-rich window, their biggest contiguous land packages are in the dry gas part of the play.

The core of the liquids-rich acreage is really held by four companies: Chevron (dark blue), EnCana (grey), Shell (red) and Trilogy (yellow). Yoho also holds a strip of land in the right area (orange)—small in the grand scheme of things, but probably material to a company with a $150 million market cap.

While Yoho is indeed a pure play, their challenge is that they are not in the data sharing group with the majors so it’s likely they will be behind on how/what technologies are improving production and lowering costs. So capital efficiencies—the cost to bring up a barrel of oil/condensate/gas–will be poorer.

Shell and Chevron are too big to get much recognition for this play in their share price. EnCana might—maybe helping them shed their reputation as an unexciting dry gas play.

Trilogy is running quickly in the Duvernay, having drilled 11 horizontals here as of October. The company will dedicate $75 million to the play in 2013—a good chunk of its total budgeted capex of $350 million for the year.

Trilogy also holds a unique advantage when it comes to producing Duvernay liquids-rich gas. The firm has a liquids processing agreement with an extraction plant in Illinois—allowing it to ship high-liquids gas here. That means two great things–they don’t have to finance expensive separation facilities—and they accessbetter product pricing in Chicago.

This will be the company to watch to see how wells here ultimately affect the bottom line.