Home Energy Services How To Invest in LNG Shipping

In Part 1, I explained how LNG shippers will be one of the best investments—and THE best way to play cheap natural gas—right through to 2015. A combination of fast-rising demand from Asia and almost no new ships before the end of 2015 will keep cash flows and stock prices high for investors.

And then: one of the most abundant and cheap sources of natural gas in the world—American—could extend investors’ run right through to 2020.

Operating costs for these ships are as low as $14,000 per day. That’s greater than a 90% margin for the best operators! How many companies—or sectors—can boast of that? Very few. And I believe these margins will stay strong for at least three years due to the lack of new ships. (This also helps explain the large Price:Earnings ratios this industry has.) All-in operating costs including amortization is closer to $60,000/day.

Industry observers suggest U.S. LNG export capacity will exceed 6 billion cubic feet per day (6 bcf/d). Six bcf/d is about 9% of the current U.S. daily gas production of 64 bcf/d, the largest output in the world. This translates into demand for 85 to 100 more LNG carriers just for the US export market.

And if even only one-third of the US LNG export terminal projects go through, Norway’s Arctic Securities says the industry will still require 28-37 additional vessels – the equivalent of 50-60% of the current order book (which is roughly 64 new ships).

The US has actually already delivered its first LNG export—one ship has gone from Louisiana-based Sabine Pass LNG terminal owned by Cheniere Energy (NYSE:LNG) to the UK.

What can happen when a company grows incredibly fast, quarter after quarter?

For starters, it may pay shareholders a fat dividend… to show the Market confidence in its ability to grow earnings.

That’s exactly what I’m seeing with one fast-rising energy services company. In fact, it has one of the best profit margins I’ve ever seen in the energy patch.

And, as you’ll find out here, it could be one of the oil market’s best dividend plays of 2012.

Follow this link to get the inside track on this fast-moving trade.

Last October, the United Kingdom’s BG Group signed the first contract to export LNG from the United States once the first liquefaction terminal is ready in 2015. (Liquefaction is the process of turning gas into LNG—gas gets compressed to 600:1 in a liquid. A liquefaction plant IS an LNG export terminal; LNG import terminals are called Regasification plants.)

BG said they’ll buy 3.5 million tons per year of LNG (1 million tons=0.12 bcf/d) over a 20 year period from Cheniere at Sabine Pass. Construction on the project is expected to start in April. Private equity fund giant Blackstone is helping to move the project along by providing $2 billion of the $5 billion needed for project financing (in exchange for an equity stake) to Cheniere subsidiary, Cheniere Energy Partners.

Spain and India have also signed deals with Cheniere. Five LNG export terminals in the US are now actively being discussed and applied for, which would total about 8.4 bcf/d. The three Canadian proposals for Kitimat B.C. total 2.9 bcf/d. As context, consider the average LNG carrier holds just under 3 bcf.

Energy consultancy PFC Energy spoke about the deal, “Lots of companies that have been skeptical about U.S. LNG exports will look at the BG deal and wonder whether they should be studying this more closely.”

(For you history buffs, the first LNG carrier, the Methane Pioneer, was built in 1959… and transported LNG from Lake Charles, Louisiana to Canvey Island in the United Kingdom.)

LNG exports from the US are NOT expected to have a material increase in US natural gas prices, however.

“Using RBAC’s GPCM model, we ran five different scenarios with export volumes from 0 to 6 bcf/day, all originating from LNG export terminals along the Gulf Coast,” he said. “We found that the average impact on price at the Henry Hub varied from $0.13 for 1 bcf/day to $1.33 for the extreme 6 bcf/day case.”

At current prices of $2.35-ish in the US, an extra $1.33 will only allow the lowest cost producers to be profitable. The article talked like this would be a big deal—sorry, I don’t see sub-$4 gas as a big deal.

In fact, this should help permitting of these LNG export terminals if politicians know that even at maximum capacity of 6 bcf/d leaving American shores won’t really increase input costs for industry or residential home heating.

As yet, the development of six massive LNG export facilities in Australia has not had a significant impact on domestic natural gas prices.

(Please remember all this thinking assumes that the bulls are wrong and the shale gas wells won’t deplete in 5-6 years.)

I think the global LNG shipping market will STILL BE UNDERSUPPLIED even with no US LNG exports. 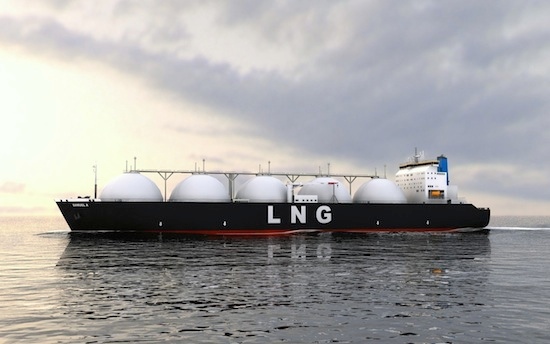 Morgan Stanley suggests that even though liquefaction capacity is ONLY increasing at 6-8 bcf/d from 2011-2015, that still means the industry needs another 75-100 LNG tankers. The current order book is only 60 and if you can get a spot in the production line in the shipbuilders’ schedule at all (drillships and offshore rigs are your competition) it’s a two-year build. Liquefaction capacity is the #1 restraint on the global LNG market developing even faster; the demand is there in spades.

So even at the end of 2015, the industry will not likely have caught up with demand yet.

To sum up—the fundamentals for the industry are sound until at least 2015. According to the Oslo-based investment bank RS Platou Markets AS, demand for LNG carriers will expand 12% this year while the fleet will grow little. The world’s largest shipbroker, London-based Clarkson PLC, said that only two tankers will join the fleet of 374 ships, an expansion of less than 1%.

An analyst for Morgan Stanley, Fotis Giannakoulis, said “This bottleneck cannot be corrected overnight. It will take years, and it is an opportunity for a lot of LNG shipowners to generate premium returns.”

Then in the period from 2015 onward, the anticipated arrival of the United States as a major exporter of its abundant and low-cost shale gas could mean boom times for the industry until 2020, as the number of ships needed continues to struggle with the ever-increasing demand for LNG vessels.