Many investors are aware of the technological innovation – fracking – which has brought about a natural gas boom in North America. But the new technologies just keep coming…and the latest technologies will again REVOLUTIONIZE the global natural gas industry.

The latest significant breakthroughs have to do with the production of natural gas in offshore areas that had been previously deemed to be too far from shore or too small to develop on an economic basis. Many offshore gas discoveries have not been commercially viable due to high capital expenditures required to bring the gas onshore. So in many cases, the gas is simply flared or re-injected back into the offshore reservoir.

Notice the similarity here to what happened with shale gas. The industry knew the gas was there in the shale fields for a long time, but it was simply not economical to exploit such fields until fracking technology became widely available, allowing shale gas fields to be exploited in a cost-effective manner.

Needless to say, as with any technological revolution, there are massive profit opportunities for investors who become aware of new technologies at an early stage. The technology we are speaking about, which is set to open up offshore gas fields is floating LNG (liquefied natural gas) terminals, which serve as floating liquefaction, storage and offtake facilities. 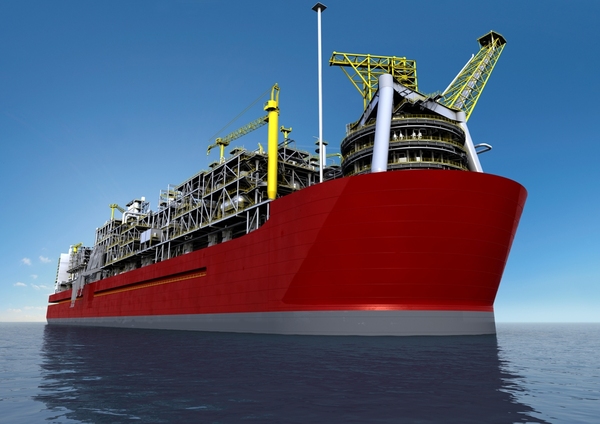 The number of offshore natural gas discoveries has climbed dramatically in recent years. It is estimated by Royal Dutch Shell that there is at least 300,000 billion cubic feet of natural gas lying in offshore fields. This is a conservative estimate that does not include gas that is stranded in shallow water, very small fields, ice-prone areas, or obviously fields yet to be discovered.

In order to make many offshore gas discoveries profitable, over the past few years several companies have been developing floating liquefaction technology to allow the offshore liquefaction of natural gas. These offshore floating LNG production facilities, called FLNG, reduce the capital expenditure required to produce LNG as compared to land-based terminals, where such expenditures are generally higher because of the cost involved in building onshore facilities and the pipeline necessary to bring the gas onshore. FLNG also reduces the carbon footprint of LNG production.

One of the leaders in developing FLNG technology is international oil giant, Royal Dutch Shell which has spent the last 15 years working to perfect the technology. Its groundbreaking nearly $200 billion Prelude project is located in the Browse Basin offshore of northwest Australia (which has about 100,000 billion feet of natural gas or 5 times US annual consumption) and is expected to come online by 2016 or 2017. Once operational, Prelude is expected to produce at least 5.3 million per year of liquids. 1.3 million tons per year of condensates and 3.6 million tons per year of LNG. 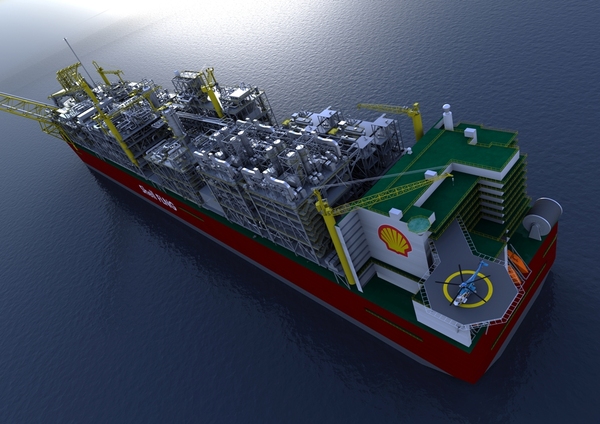 The sheer scale of the Prelude vessel, being built by Korean shipyard Samsung Heavy Industries, is impressive. It will the world’s biggest offshore facility, weighing 600,000 tons, will be six times bigger than the largest aircraft carrier (534 yards long and 81 yards wide), be anchored by an 11,500 ton turret and will be moored offshore Australia for at least 25 years.

It cannot be emphasized enough as to what a major step forward in gas production Shell’s Prelude is…..

Energy research firm Wood Mackenzie said about the project, “This is a key milestone in the development of the LNG business. This will change the business.” Another energy research firm PFC energy goes even further, saying that FLNG is the future of the global LNG industry. It believes most planned fixed LNG facilities will not be built and that the industry will move rapidly toward FLNG.

And they may be right. In addition to Shell, companies like Petrobras are moving swiftly to using FLNG to exploit gas fields lying in the rich waters offshore Brazil. Forecasts from most energy analysts are that by 2015, the liquefaction capacity of FLNG projects around the world will be 6.7 million tons per year or about one-tenth of global capacity. If Prelude is successful, FLNG usage will expand even further after 2017.

Investors should also not forget about another technology on the horizon in the global gas industry. It is called FSRU, which stands for Floating Storage and Regasification Unit. These are basically LNG carriers with onboard regasification equipment. FSRUs receive, store and convert LNG into ‘warm’ natural gas that is suitable for pipelines or use onshore.

FSRUs can be built new or converted from existing LNG vessels. The technology to convert a regular LNG carrier into a FSRU has been pioneered by Golar LNG Limited.

FSRUs have distinct advantages over land-based LNG facilities. One primary advantage is time – it takes only 2-3 years for an FSRU project versus 5-7 years to build an onshore terminal. Another advantage is cost – it takes about $150-$350 million to build an FSRU versus $300-$700 million for an onshore facility. And obviously, a FSRU is offshore (not seen by most of the public as are unsightly onshore facilities) and can be moved from location to location.

It is believed there will be between twenty and thirty potential FSRU projects globally, many of which are feasible and likely to be completed and begin operating before the end of 2015.

One of these projects is located in China, which is predicted to be the second largest LNG importing nation in a few years trailing only Japan. China’s national offshore oil company and top LNG importer CNOOC just recently announced it started construction on the country’s first floating liquefied natural gas receiving and storage facility near the northern city of Tianjin, a nearly $1 billion FSRU project.

New Technology Leads to a Bright Future for LNG

New technological facilities like FLNGs and FSRUs are setting the groundwork for massive future growth of LNG as a major part of the global energy framework.

The International Energy Agency forecasts that within a few years, LNG imports will meet about a fifth of the total incremental demand in the world for gas. In 2010, LNG accounted for about 10% of the total global demand for natural gas. This implies a double-digit growth rate for LNG over the next few years and possibly even longer with most of the demand growth coming from Asia and the Middle East.

Shipments of LNG to the Asia-Pacific region is growing at 20% per year says Bernstein Research. Overall global demand for LNG, according to Bernstein, will nearly double over the next decade to 408 million tons a year.

The only way for energy companies to meet the ever-growing demand for natural gas by the likes of China and India is through the use of new technologies such FLNGs and FSRUs. From onshore facilities to offshore floating facilities. That is the future of the global natural gas industry which faces investors in the years ahead.