Scott McLeod is a Geologist with 4 years of experience. His experience includes conventional prospecting of offshore plays in the North Sea and Mackenzie Beaufort to gas and oil resource plays of the Central Alberta Cretaceous and Jurassic to the conventional reef and tight gas plays of the Devonian and Triassic of NE BC. (Email: Scott.A.McLeod@gmail.com)

With a green light from government this week — along with new property acquisitions — Southern Pacific Resources (STP – TSX) is primed to make a big move in the Canadian Oil Sands.

Before I dive in, here’s a quick snapshot:

Southern Pacific is a Canadian listed Heavy Oil (pure play) Company exploiting oil from two major properties in the Canadian heavy oil and oil Sands: Senlac and McKay. These properties have the potential to increase production to greater than 25,000 bbls/d. That’s a 500% increase. STP purchased the Senlac property from EnCana in early 2009 when oil was trading at $30/bbl and the world looked quite bleak. With the continuous rise of the price of oil and a modest rebound in the equity markets, shareholders in STP have done quite well.

The big news driving the stock this week was government approval for STP to begin developing their main asset, the STP-McKay SAGD project (Steam Assisted Gravity Drainage – see Wikipedia explanation here:  http://en.wikipedia.org/wiki/SAGD), which the company plans to grow into a 12,000 bbl/d production asset.

–  Cash flow consistent, if not rising every month

–  If you believe oil is going higher and/or staying above $80/bbl, STP’s share price is heavily discounted

–  With further financing, we could see further share dilution

–  Although some productions is hedged, fluctuating commodities prices can negatively impact

–  Inexperienced management (relative to their peers), although with the recent acquisitions and hiring, the experience in operations and building of thermal projects have increased significantly

The Next “Bakken Buyout?”

This stock is now on the move – a fast-growing junior oil producer in the red-hot Bakken oil formation. They also have one of North America’s most valuable natural gas assets – which isn’t priced into the stock at all. After they added 95 million barrels to their reserves this week, analysts responded by upping their targets.

This little-known Bakken player could be scooped up by an oil major – or a natural gas major…any day now. Analysts say they would be getting the oil or the gas for FREE.

I’m sharing the name of this company – along with 12 pages of my own detailed coverage – in my new FREE report. CLICK HERE TO ACCESS YOUR FREE OIL & GAS INVESTMENTS BULLETIN STOCK REPORT!

Looking at a recent stock chart, we see that a strong uptrend has occurred since break out with the MACD’s (Daily’s) both positive and the 50MA still riding above the 200MA. RSI is gaining strength, albeit entering overbought territory. 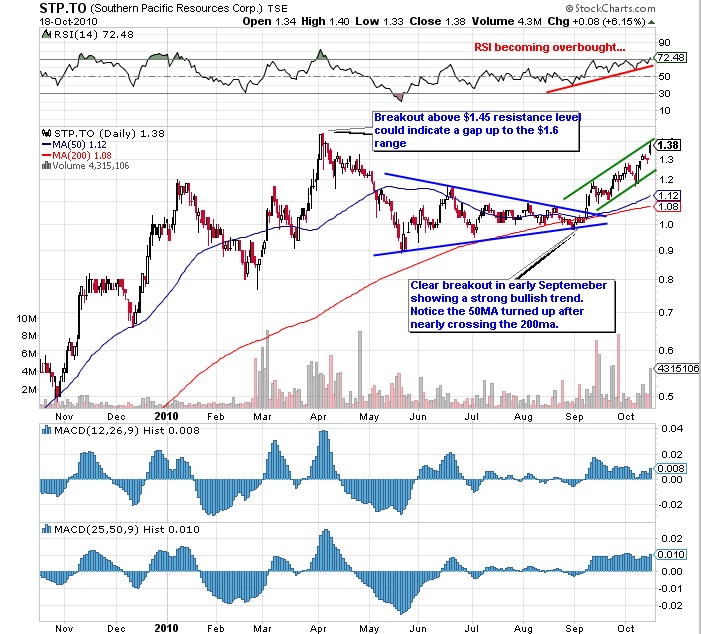 In the last 6 months, STP has raise over $160 million in two equity financings. STP has also generated record funds from operations just over $35 million. The Company claims their contingent resource (P50) recoverable is around 489 mmbls with a reserve life of greater than 50 years. Digging deeper into the research we find that recent analysis done by BMO Capital Markets claim that recoverable resource is shy of 1 billion barrels at 807mmbbls. If STP were to ramp production up to 25,000 bbls/d, that’s a reserve life of 88 years! Either way, it’s starting to look like Southern Pacific is going to become a bigger player in the oil sands sector.

Another recent highlight (and helping to drive the stock price) is their recent announcement of the acquisition of North Peace Energy. The deal adds potentially another 1,000 bbls/d, 135 net sections of land, and another 105 mmbbls of reserves. STP plans to take this 1,000 bbl/d production to at least 10,000 bbl/d. 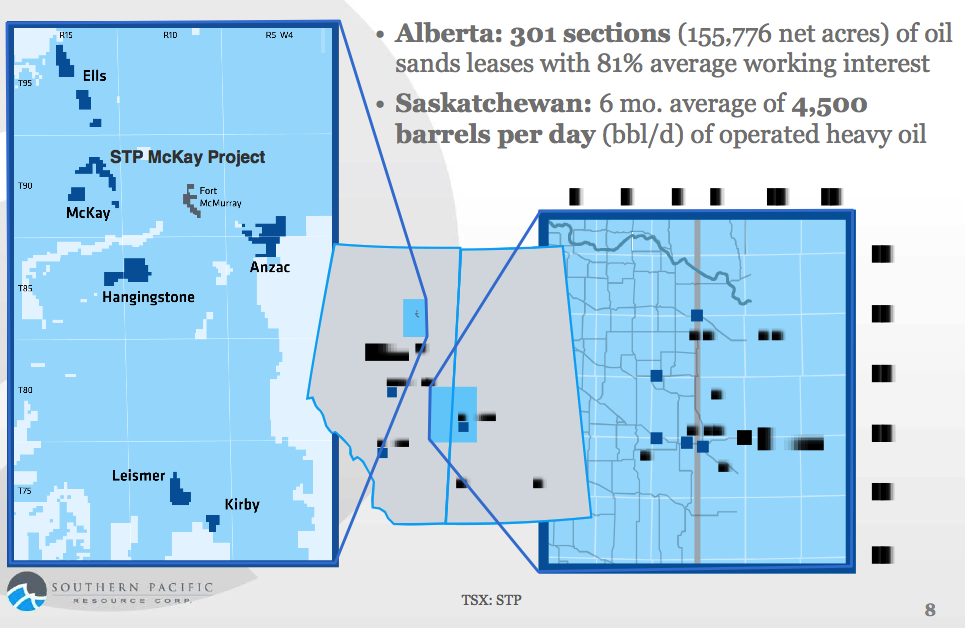 *Be on the lookout tomorrow for Part 2 of my report, where I’ll take a close look at STP’s properties… and offer my full valuation and investor summary.