(Note: Click here for Part I of this article)

–  The cash flow is strategic as they hedge production. The risk of a commodity crash is removed with production being hedged at $70USD and $90USD on half of their production. The other half is exposed but is enjoying the current commodity upside.

–  Because of this extensive capital requirements ($383.8MM Gross for McKay alone), STP will be taking on further debt. I’m not a huge fan of bank debt but with the exploration risk removed, I am comfortable with STP’s looming debt conditions. See Figure 2 for an example of the McKay spend profile. Costs will rise substantially in early 2011.

This was the first of STP’s SAGD properties and is currently on production. SAGD is working with production averaging 4,400 bbls/d until 2024. See figure 1 below. 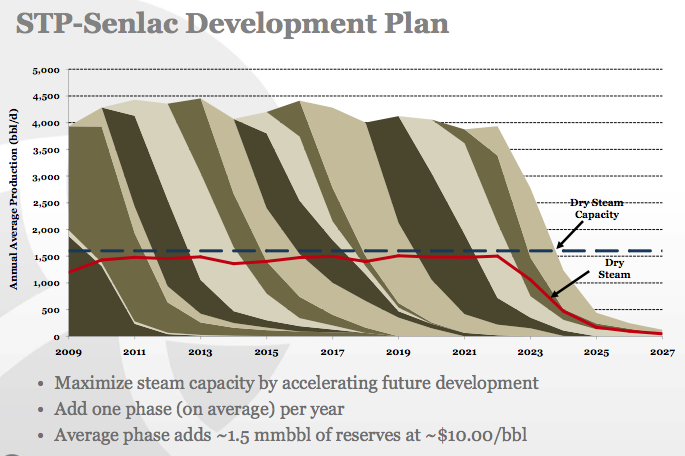 STP acquired the remaining 20% interest on March 19th, 2010 of their McKay property. A week later, STP announces their reserve increase and the story starts to play out like Bankers Petroleum – Bankers’ stock took off when the market started to revalue the company based on long life reserve potential, instead of cash flow per barrel. Then we have their very recent (today) announcement of formal approval for McKay. Right now, shareholders are consistently getting good news.

Now that STP has formal approval for STP-McKay, watch for dramatically increased production over the next several years. First steam will commence this winter with production from McKay ramping up to 10,000 bbls/d by 2014 with total production around 14,500 bbls/d. 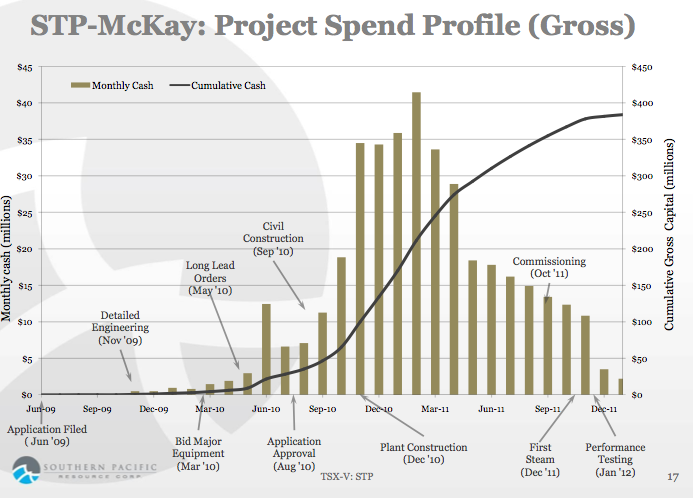 I am not as familiar with valuations for oil sands companies so I’ve assumed $100,000 / flowing barrel and discounted land positions. I cannot predict wells/section as the SAGD pairs are determined on a steam to oil ratio.

First, according to Raymond James (see Table 2), STP is trading at around $0.11 per barrel of recoverable resource (assuming today’s price of $86/bbl). This number is a lot lower than it should be. Canadian brokerage firm BMO Capital Markets has STP trading at $0.21/boe in an “Existing and Under Construction” valuation.

Compare this to Canadian Oil Sands Trust, MEG and OPTI; these three are much larger companies and are trading at $2.70, $1.31 and $1.35 per boe. STP’s $0.21/boe is a huge discount to those numbers.  How large a discount should there be as a pure play – even a junior one – in the sector?  And as oil approaches $100/bbl, the dollar per recoverable resource becomes negative for STP.  All their assets have been independently appraised.

Dozens of Explosive Profit Opportunities Ahead

The next 12 months could be the most important of your investing career.

A scenario is unfolding in the oil & gas sector that will present dozens of triple-digit profit opportunities in the next 12 months.

I’ve prepared a full report that explains this astounding scenario in clear detail…including how you can take full advantage.

Here are some potential valuations I have come up with. See the below chart. I’ve broken out stages of production from 3,500 bbls/d to 12,000 bbls/d to 24,000 bbls/d. I have assumed shares outstanding will be constant and that the value per flowing barrel does not change. These are simple assumptions. We all know the price of oil can swing dramatically. I think by assuming $80 and a fair valuation per flowing barrel, one could add these phases of production and get to an Enterprise Value (remember, nothing discounted).

Valuations based on production and avg$/flowing barrel.

The uptrend in the stock price recently says that relatively inexperienced management team at STP continues to impress the street. Acquiring the Senlac property when oil was in the low $30’s, completing their 100% interest in McKay and getting formal approval for McKay while increasing proved reserves have played out well for the Southern Pacific Team.

With such an attractive low valuation (trading at less than 20c per boe in the ground) I will continue to be long STP with a modest 5000 shares (average purchase price, $1.06/sh). I will also continue adding to this winning position as share price breaks through the coming resistance levels. 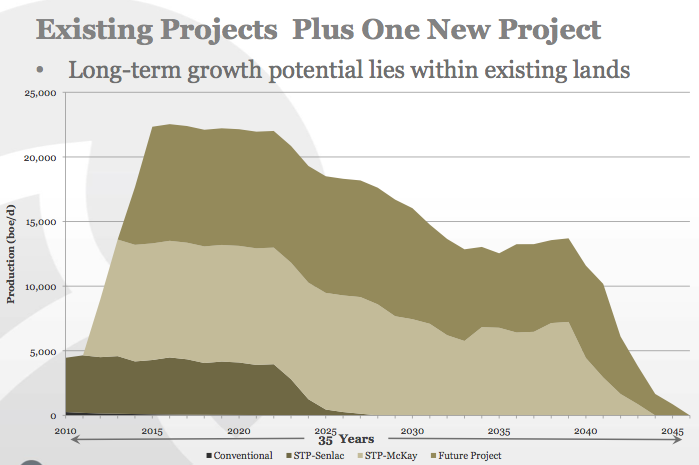 Scott McLeod is a Geologist with 4 years of experience. His experience includes conventional prospecting of offshore plays in the North Sea and Mackenzie Beaufort to gas and oil resource plays of the Central Alberta Cretaceous and Jurassic to the conventional reef and tight gas plays of the Devonian and Triassic of NE BC. (Email: Scott.A.McLeod@gmail.com)