Home Investing Natural Gas Companies Can Make Money at $5/mcf Gas – Thanks to...

Two new related technologies in the oil and gas industry are about to forever change the economics for its investors, producers, and consumers.

Companies usually drill down thousands of metres – vertically – for oil or gas.  But now they have the technology to turn the drill bit deep in the ground and drill out horizontally along an oil/gas reservoir for thousands more metres – accessing much more hydrocarbons.

That’s why more than 40% of all wells in North America are HD wells – and it’s steadily rising.  Onshore natural gas production in the US is up 9.6 billion cubic feet per day (bcf/d) since 2002 – almost all of it Texas shale gas that uses HD.

For natural gas consumers, this technology is great news – it should mean lower prices for at least the next several years.  With HD/MSF, gas producers like Canadian giant Encana, EOG Resources and several dozen intermediate/junior companies have discovered how to get the gas out of new formations in Alberta and British Columbia that total potentially 10x Canada’s current natural gas reserves (more on this below).

Because the HD wells have so much more production, the cost to get this gas out actually decreases.  Statistics from Canada’s National Energy Board show average production costs in western Canada over $7.50/mcf (see map below).  One oil and gas company, ARC Energy, has said they can show a profit at $5 gas on many of their new HD wells. Research analysts are quoting other western Canadian plays could be profitable at CAD$4.50 gas.

So combine a cheaper cost of production with huge new reserves that could last decades – oh, and throw in a global recession that dramatically lowers demand – and that equals lower natural gas prices.

The number of HD wells is rising because of their superior economics – over 40% of all wells in North America are HD now.

For natural gas producers and investors, it creates a good news/bad news story.  The good news is that costs are lower with HD, and margins are higher.  So companies with large undeveloped land packages that hold HD plays should  be able to produce gas at a profit even at these low prices.

The bad news…the technology is opening so many new low cost plays with huge reserves it will lower the price of natural gas for years.  And so, companies with no HD plays become high cost producers and their very survival is now uncertain.  Most producers put on a lot of debt at higher gas prices and without HD plays nobody wants your high cost assets in a low price environment.

HD had a big impact on investors in 2008, as company presentations and analyst reports now regularly talk about how many HD locations are available for drilling.  Successful HD wells increased production and cash flow 400-700% over vertical wells, and in a bullish price environment sent stocks soaring.

But moving forward now, HD will have a more subtle impact for investors.  The low gas prices of today are cyclical and this recession will give the industry its regular consolidation phase.  The next 6 months will be full of mergers and acquisitions as those companies with high debt loads and/or high production costs get sold or go bankrupt. That all would have happened anyway.

But on the other side of that consolidation activity will be a lower cost landscape because of HD.  Analysts are likely to re-jig their valuations.  Will the industry continue to get 5x cash flow multiples if margins are going to be permanently less? HD/MSF lowers the cost of gas, yes, which should help cash flow, but it is also opening up huge new gas fields with decades of reserves, so I just don’t see natural gas inventory levels ever getting so low that fear of supply would cause prices to spike.

(For workers, HD has saved the western Canadian oilpatch.  It was only mid 2007 when the world’s oil and gas industry was certain the Western Canadian Sedimentary Basin (WCSB) was a mature basin with no more big discoveries to be had.  Now it’s a hot play! If you think job losses are bad now in the oilpatch with low commodity prices, it would have been much, much worse without HD.)

I don’t expect to see double digit gas for a decade (unless North America starts to export Liquid Natural Gas, but that’s for another story).  Natural gas prices will remain low, and industry cash flows going forward will be less than what the industry has enjoyed for most of this decade.

I don’t know what these new valuations will be but I am confident that those companies with large undeveloped land positions in gas plays that are suitable for HD wells will get the greatest valuations.

My newsletter – Oil and Gas Investments Bulletin – will profile in easy to read terms, several of the top producers with proven management teams who should excel in this new, lower cost and price environment.

Let’s drill a little deeper into the issue.

I’ve made HD sound easy – it’s not. Determining where an oil or gas bearing formation is, more than 2000 m underground, and how it lies, and guiding the well bore all the way, and finding the right chemical mixture to blow into the formation with huge force (fracing) – is very technically challenging.  Some management teams do it better than others.  My newsletter will help investors separate the winners.

HD  technology is still improving – producers used to be able to drill out horizontally only so far as they drilled down – a 1:1 ratio.  Now drilling 4:1 is normal and one of my contacts at a drilling company told me there have been 10:1 wells.  Companies can now access much more oil and gas in the productive payzones.

With HD, an increasing number of producers can make money at $5 gas/mcf – some as low as $4.50 per mcf.  Industry statistics and research analysts indicate that producers need $6-$8/mcf to earn a profit.  (See this map issued by the National Energy Board of Canada for natural gas costs in western Canada) 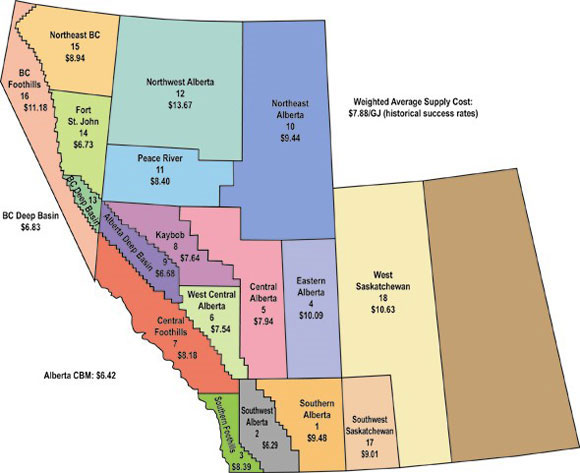 These cost figures are about to drop, as HD improves economics on gas wells. HD is a game-changing technology, lowering natgas costs for at least the next several years.

HD INCREASES RESERVES AND IS OPENING UP NEW GAS FIELDS

Several new low cost oil and gas plays in North America are using HD.  The Bakken formation in Saskatchewan and North Dakota has become famous in the industry for increasing production from almost zero to more than 40,000 barrels of oil per day (bopd) now, with over 800 HD wells drilled.  The US Geological Survey (USGS) estimated over 4.5 billion barrels of original oil in place (OOIP) in the US part of the Bakken.  That is a huge number.

Onshore gas production in the US has increased by almost 10 billion cubic feet of gas per day since 2002 – almost all of it Texas shale that uses HD.

While it’s still early days in the ongoing exploration for the tight gas and shale gas in North East British Columbia and North West Alberta, several gas bearing basins are estimated to have a combined total of more than 1000 trillion cubic feet (Tcf) of gas!

Not all of that will be recoverable (initial estimates are ranging from 50-65%), but consider that the Oil and Gas Journal estimated all of Canada’s current natural gas reserves in January 2008 was 58 Tcf; (Canada’s National Energy Board estimate in 2004 was 92 Tcf) we produce 6 Tcf a year and consume only 3 Tcf (exporting the rest to the USA).

As examples, the newly discovered Horn River Basin in northern British Columbia could have 500 Tcf of original gas in place (OGIP).  The Montney Formation in NE Alberta could have up to 250 Tcf OGIP.  There are over a dozen new plays/basins that could use HD to produce low cost oil and gas.  These basins have different geology, and HD has shown it can be used in all of them.

Of course, there is another side to the story.

1. Decline rates are rising. A decline rate is how quickly well production falls off – they all go to zero eventually, after a well pumps out all the oil & gas there is. HD wells generally have a 50% decline in the first year – way above the normal 15-20% – but after that annual declines are normal. And remember, these wells are producing an average four times more gas than a vertical well to begin with.

That reasoning leads you to believe wells will deplete sooner.  But these formations are huge, and the reserve life index (RLI – how long a well will produce economically) I see on these wells is still 6-8 years, which is what normal natgas wells are now.

If HD wells do end up having high decline rates and the wells don’t last as long, then obviously new formations will have to be found and exploited, and at that point it is realistic prices will have to rise.  When that will be is anybody’s guess.  My best guess would be several years at least.

2. Another bullish argument for natgas is that the number of drilling rigs actively exploring for oil and gas in North America is declining – mostly in the US (Canada is still actually up over last year). But that will really only impact pricing 12-24 months from now, or even later. SIGNIFICANTLY – while rig counts are declining, the number of metres drilled in 2008 – at least in Canada – are not, because of HD. The drillholes are just longer – and more productive.

3. Because HD wells cost more, they NEED to produce at higher rates. And these HD natgas wells are only profitable at low prices if they are big producers – right now the industry is saying any well under 4 mmcf – or at the industry standard 6:1 conversion rate of gas rates to oil rates, 240 barrels of oil per day (bopd) – must have higher prices (without saying exactly how much) to be economic. 240 bopd is an above average well by WCSB standards.

4. All these new areas which have potentially large reserves are remote, and in difficult terrain with no supporting infrastructure, and will need higher gas costs to be economic. This is very possible.

Industry producers with large debt loads and higher costs will have to get creative to survive.  As this process moves forward, the new leaders will be those with large undeveloped land positions in plays that suit HD/MSF, and have strong balance sheets.  The buying season for those companies should start late spring or early summer.

Valuations will bottom at some point, and that is when patient investors who have done their research can begin to benefit.
[random:subscribe]