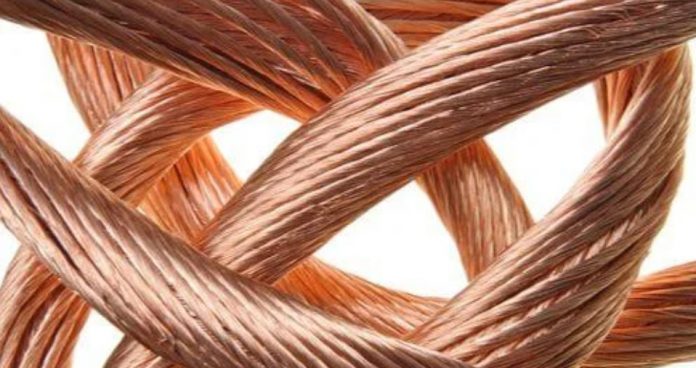 Late last summer we published two blogs outlining the case for copper and copper stocks (here, and here).
What we said was:

We argued that if you could “look past the next 6-12 months” and “hold your nose” you would see a “massive tailwind for copper.”

We are now 4 months removed from those posts.  And you know what?  That “hold your nose” trade worked well.

Our copper stock list has significantly outperformed the market since those articles were published. 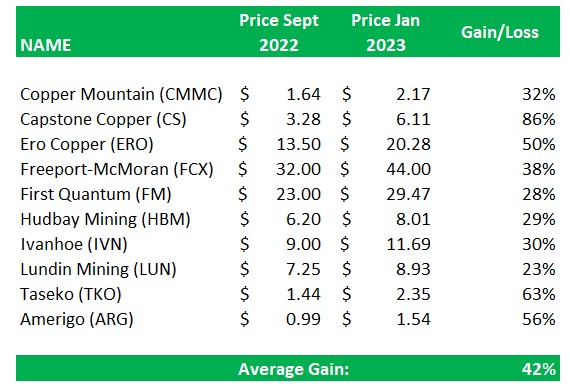 A 36% gain since July is nothing to sneeze at.

WHAT CAUSED THE RALLY?

The rally was not driven by anything company specific.  This was a move across the whole group driven by macro.

I’m not talking about “the economy is getting better” kind of macro.  We aren’t there yet.  But stocks move up well before the economic data gives us a good reason for it.

What we are seeing instead is a “hope” trade.  You never can tell if this is the hope trade, the one that will lead us into the next bull market.  But sentiment is always the precursor.

The improving sentiment on copper has led to an improvement in the price. 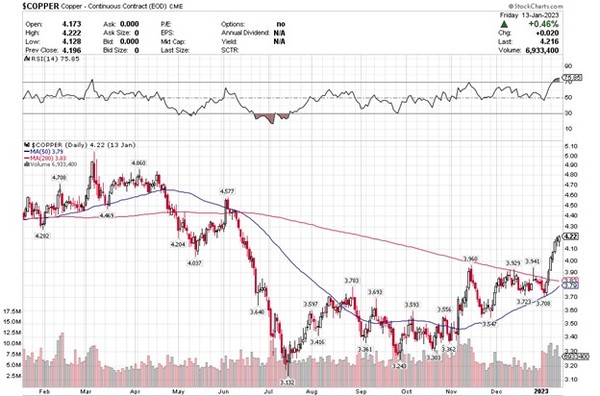 Driving that sentiment has been China and the end of their COVID lockdowns.

With the re-opening of China, a new narrative has emerged.  Increased demand from China is hoped to offset weak demand from the developed world as it slows into recession.

There is reason to believe this could happen. China accounts for more than half of copper demand. 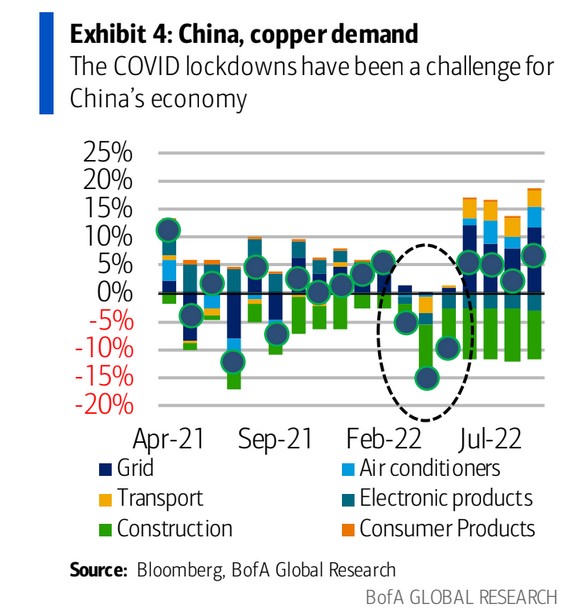 Meanwhile inventories of copper across the globe keep falling and falling… 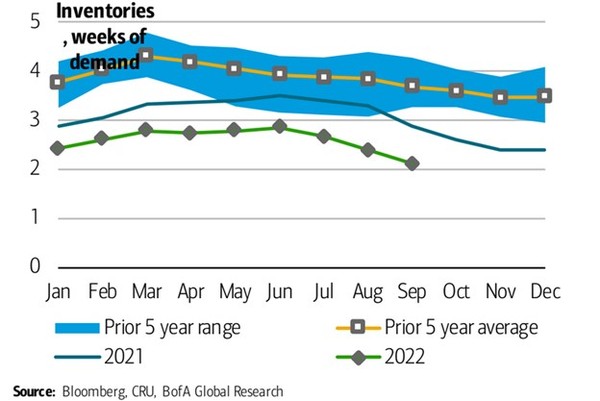 LME warehouses are down to only a couple of days of inventory.   The Shanghai warehouse is not much better.

While its tricky to estimate exactly what inventories are across the globe, it is safe to say that the number is lower than you’d like to see.

COMPANY PERFORMANCE HAS BEEN MIXED

And how have the companies we tracked performed?  Mixed at best.

Q3 results and the preliminary Q4 numbers have seen more misses than beats.

Costs were up across the board on the back of higher energy prices, higher chemical prices, and higher labor costs.

Add on a floundering copper price (under $4 for since Q2), and cash flow has been lackluster.   Forward analyst estimates have trended down. 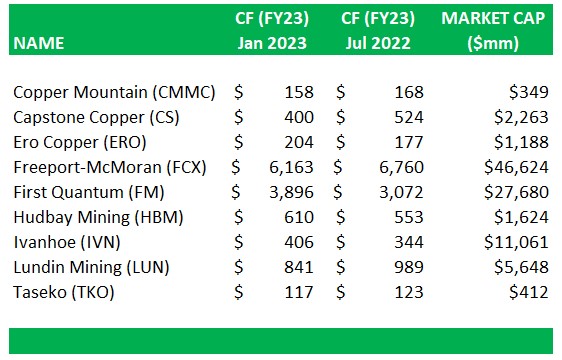 You simply can’t attribute the relative outperformance of names like Capstone Copper (CS – TSX) and Taseko Mining (TKO – TSX) to their operating results.

Instead, what has driven relative performance has been largely about events not tied to their operations.
Here is a summary of 4 names that did have significant events over last 4 months:

CAPSTONE COPPER – THE PROMISE OF STABILITY

The biggest outperformer of the group has been Capstone Copper.  Capstone is up 86% since September.

The reason?  Likely an analyst site visit in November that reassured investors, in particular that Capstone’s big development project is on track.

Mantoverde is Capstone’s next big growth driver.  The expansion project is expected to add 70 kt per year of copper in 2024.

What Capstone told investors at the site visit was that Mantoverde was on schedule and budget – and that it is 69% complete.

Canaccord said after the visit that they now viewed a capital cost overrun as unlikely.   Given the blow up in costs at other projects, this reassurance likely put a bid under the stock.

As a result, we now see 2024 production growth from Mantoverde getting priced in. 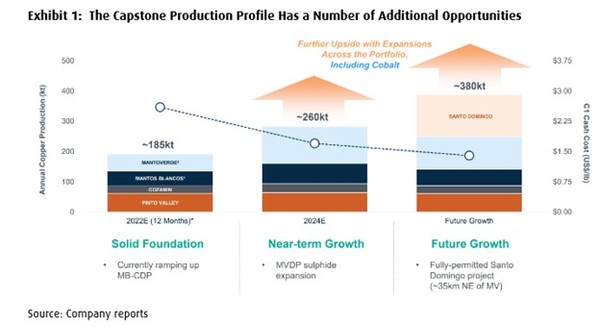 Capstone 2024 cash flow per share estimate (once Mantoverde is fully operational) is $0.98/share on $3.40/lb copper.  While the share price makes the stock look expensive on today’s numbers, it is less pricey if you look ahead.

TASEKO MINING – A DESTINATION IN SIGHT

Taseko Mining was the second-best performer on the list.

When I wrote about Taseko in September, I noted two points.

First, they needed to show a turnaround at Gibraltar, which I felt was likely.

Second, the BIG question was their development project – the Florence project in Arizona – raising capital for it and getting it through regulatory hurdles.

Taseko delivered on both points, but it was Florence that drove the stock.

In December, Taseko signed a strategic partnership with Mitsui to develop Florence.   Mitsui committed $50 million in exchange for a royalty of 2.67% of copper produced, which will be paid for at 25% of spot.

Mitsui can invest another $50 million for a 10% interest in the project.

While the stream adds about 7c/lb to the cash costs of the project, the funding and vote of assurance from a large player added a lot of credibility.

Taseko followed it up with a commitment in January from Bank of America (BAC – NYSE) for $25 million to fund capex costs.

Together that is $75 million of funding ($125 million if Mitsui exercises their option) for a project with a $230 million capital budget.

We are still waiting on the final Underground Injection Control (UIC) permit for Florence from the EPA, which will be the make-or-break moment for the project.

The market is signaling that the deal with Mitsui and funding from BofA are signs that the project will be a go.

Copper Mountain Mining (CMMC – TSX) has had a lot of news (both positive and negative) in the past few months.

The news on average seemed to balance out.   The stock slightly under-performed the group average.

In my last blog I called Copper Mountain “the poster child for operational risk”.

Q3 2022 results were just plain bad.  The 13 million pounds of copper produced was less than Q2 and less than already reduced analyst estimates of 15 million.

Cash costs ballooned to $3.70/lb while all-in-sustaining-costs (AISC) were well above the price of copper at $4.50/lb. 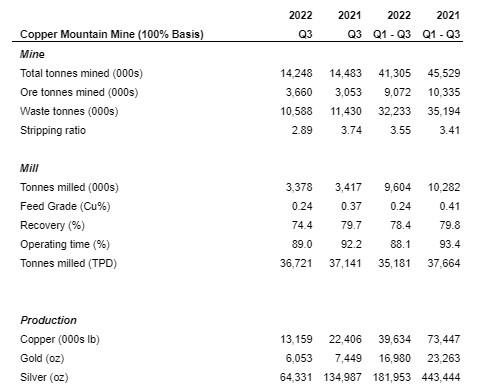 The stock price would have been a disaster had it not been for the good news: Copper Mountain announcing the sale of their Eva Project in Australia.

Eva is a late-stage project with high capital costs (estimated at A$850 million in the 2020 feasibility study).  Given Copper Mountain’s modest market cap (~$400 million) financing Eva always seemed like an exercise in dilution to me.

Instead, Copper Mountain sold Eva to Harmony Gold Mining (HMY – NYSE) for US$170 million of cash and contingent consideration that could be another US$60 million.

This seems like a great deal.  It removes the overhang on financing and – I suspect – sets up Copper Mountain as an acquisition target.  Now if they could just get that mine back on track…

First Quantum Minerals (FM – TSX) underperformed the group, registering a 28% gain versus the group average 42%.  But quite honestly, I am surprised it didn’t do worse.

This has nothing to do with operating performance.  First Quantum Q3 was pretty much inline with expectations.

Instead, the big news was an unexpected tax claim by the Panamanian Government.

Panama is home to the Cobre Panama mine, which accounts for $18 of First Quantum’s NAV and over 50% of its EBITDA.

While the details of what exactly is going on is a bit sketchy, the long and short of it is that the Panamanian Government wants First Quantum to pay more taxes – including an “exploitation fee” for copper extracted in prior periods and a much-increased tax rate going forward.

While this news was known for much of H2, the prevailing sentiment seemed to be that it would get sorted out.

That turned out not to be the case, at least not yet.

On December 16th news was reported that the Cobre Panama mine had actually halted production after a deadline for agreement between First Quantum and the government came and went.

This was subsequently clarified by First Quantum.  They said that the mine was still was operating, but only because First Quantum was using legal recourse to avoid a shutdown while they continued to negotiate with the government.

On January 10th First Quantum had a conference call where they again corrected media reports – this time ones claiming that talks with the government had broken down – but also acknowledging that a resolution had not been reached.

The bottom line is no one knows how this plays out.

We can be sure First Quantum will pay more taxes.  How much is unknown, as is whether this will this escalate to the point where Cobre Panama is forced into care and maintenance?

I have no idea, but I am confident that with the stock up 20%+ in the last few months, that outcome is not priced in.

I would wait this one out until we have a firm agreement between First Quantum and the Panamanian government in place. 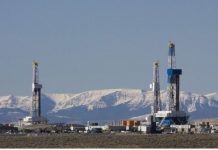 The Big Opportunity in Europe’s Scramble for ENERGY SECURITY