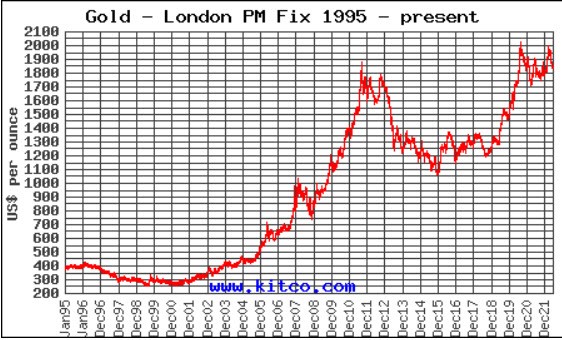 If you’re an investor over 50 years old,  you have a bar of gold in your head.

What I mean by that is—you’re aware of how gold is SUPPOSED to work in a diversified investment portfolio. It’s an inflation hedge; it’s an insurance policy…it’s nebulous now, in this market, but it’s in the back of your mind.

After watching this video on gold’s quietly growing role in geo-politics right now, it’s a little more front of mind for me — https://bit.ly/goldsreturn

Gold has actually done its job very well as a store of value in the last 20 years (gold stocks not so much).

He and Ian Telfer were the big lone wolf team at the end of the dot-com era in the early 2000s, saying gold would rise.

They had bought into a Canadian mining shell called Wheaton River Minerals in 2001.

Folks, if you think sentiment toward gold is bad now, it is NOTHING like it was then.  The Dot-Com era produced more derision to gold than at any other time in modern financial history.

That was one of my first jobs in the stock market—working as the retail investor relations person for that company.

The stock was 40 cents and we could not find buyers for what is now one of the most storied management teams in Canadian mining.  I couldn’t have learned from a better team.

As Frank points out in the video, they aggressively bought producing and development stage assets with a higher gold price in mind—so they weren’t being cheap.  That only got more people to doubt them!

But as gold moved higher through the 2000s (look at the above chart!!!), they moved Wheaton River up to several dollars per share, merged with Rob McEewen’s Goldcorp and sold that combined entity to Newmont NYSE-NEM for US$10 billion. They had the last laugh.

While they do mention their new grassroots gold junior (I am not long) I want you to listen to Frank’s comments on how the flow of gold has flowed EAST over the last 15 years.  Russia and China are setting themselves up to better break from the US dollar financial system that the entire world now relies on.  He goes into detail on this—the increasing geopolitical importance of gold–and shares some facts I had not connected before.

Of course, nobody knows what the tipping point will be for gold.  I think the coming Fed Flip—whenever that is—when the US FED stops raising rates, could be a big one.  The Greenback should drop then.

It could be the next US election; it could be a greater US involvement in Ukraine somehow…who knows. But the attitude towards gold now is what it was towards oil two years ago.