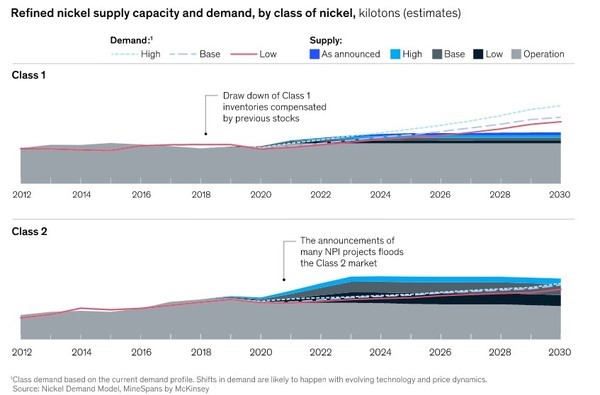 We are seeing a tug of war between the bulls and bears in the nickel market.

The bear camp is focused on increasing nickel supply coming out of Indonesia and, to a lesser extent, China, in the form of nickel pig iron (NPI).

The bulls camp counters by pointing to soaring demand from electric vehicles and a lack of high-quality Class 1 nickel projects in development.

For what it is worth, the bears have history on their side. Indonesia and China have been able to increase production of low-quality nickel (called Class 2 nickel) for years now—and in the process driven the price of nickel down.

Nevertheless, even with the coming onslaught of NPI supply, I am inclined to side with the bulls on this debate.

Not that I doubt the ability of Indonesia to produce low quality ore.

I’m just not sure there will be buyers.

On Thursday, Tesla (TSLE – NASDAQ) and BHP (BHP – NYSE) struck a major deal – for Class 1 nickel. Benchmark estimated the contract was worth 18,000 tonnes per year beginning next year.

The key word here is Class 1. Telsa and others want Class 1 nickel that will meet both their EV requirements and have an acceptable environmental footprint.

I think we are on the cusp of a unique turn in the nickel market. One where countries will balk at dirty metal – much in the same way we are seeing oil sands oil get the cold shoulder.

As with most things green, Europe moves first.

The European Union has plans for a carbon border tax. Any import is going to be scrutinized for content. If it is made from high carbon sources, a levy will be weighed.

This is Europe’s way of leveling the playing field. They realize that their own carbon reduction efforts are going to raise costs. They do not want low-cost/high-carbon competition under cutting them.

Other countries will follow. The anti-carbon movement in the US will only grow. China may not want to follow along, but once tariffs get high enough, they will have no choice but to follow.

In a few years, companies importing into any major economy will be providing an exhaustive list of where components and materials come from.

With this will come public scrutiny. If you are an EV company, even if you can handle the tariff do you want to explain how the nickel in your batteries is being smelted out of low-quality nickel, high-carbon nickel?

No way. In fact, this is exactly why we are seeing major EV producers – Tesla and Volkswagen (VAKAF – PINK) for instance– looking to secure long-term nickel supply.

Tesla has already gone out and nailed down their nickel requirements via Prony Resources and Vale (VALE – NYSE) in addition to the BHP deal.

Car manufacturers are sending a clear message – they want to control where their nickel is coming from.

Will Nickel be Disrupted Again?

Earlier this year the nickel market took a tumble, falling nearly 10% in a day. The catalyst was news from the Chinese company Tsingshan, which announced they had a new process that could produce high-quality, Class 1 nickel out of low quality NPI.

Class 1 nickel is what trades on the London Exchange. It is extremely high purity – >99%.

NPI is far lower quality. So far its usage is limited to steel production because purity is not a requirement and the iron content is beneficial.

Turning NPI into Class 1 nickel is a little akin to turning lead into gold.

But what really freaked the market out with Tsingshan’s announcement was that they have done this before.

In 2008 nickel was sitting at $50,000 per tonne. That was before Tsingshan did something genius.

Tsingshan discovered NPI. Well, “discovered” – what Tsingshan really did was realize that since both iron and nickel were used in steel making anyway, an ore with a mix of both was not necessarily a bad thing. Nickel promptly fell into a decade long bear market.

So is Tsingshan about to disrupt the nickel market again?

I have my doubts.

Tsingshan’s problem, and really what I think is the meat of the nickel bull case, comes down to carbon.

EVs and oil gets all the climate change headlines right now. But that is going to change. Soon any carbon intensive industry is going to find itself under the microscope.

NPI is far more carbon intensive to produce than Class 1 nickel. So far that has not mattered. But it will.

A recent study published in the energies journal estimated that the carbon intensity of NPI was nearly 5x that of producing metal nickel.

Tsingshan’s new process will only add to that. It will release sulfur into the atmosphere, use additional energy and, at least for now, depend on coal-fired power.

While the market worries about an onslaught of upgraded NPI, at I think we will see the opposite.

Instead of low-quality NPI being upgraded to Class 1 battery nickel, I believe we will see steel producers shy away from using NPI that comes with a high-carbon intensity price tag.

The World Steel Association has put together a tracking spreadsheet of steel decarbonization projects. So far, they have table 50 projects from many of the largest steel companies in the world.

To think that we will see a huge influx of carbon intensive NPI nickel—just as steel producers look to pare back their carbon footprint—is not reasonable.

Talking Out of Both Sides

For the bears, it is a case of seeing one big picture but missing out on another.

The bears admit that the EV story is real. They concede that nickel demand is going to increase. But they kibosh the idea of a nickel shortage by pointing to all the NPI available.

It is not about EVs folks. It’s about carbon.

EVs are the tip of the iceberg. In 10 years what we are going to see is the measurement of the carbon content of everything.

That means that the nickel market that matters – the Class 1 nickel market– is going to need new, clean supply.

Ken Hoffman, the head of EV Research at McKinsey Co. has begun to sound the alarm.

Hoffman says we are 2 years out from a Class 1 nickel shortage.

While Hoffman sees Class 2 nickel being in significant surplus for years to come, Class 1 nickel shortages could come as quickly as 2023.

In fact, the only thing preventing the shortage from materializing sooner is that there is another shortage – in microchips – that is limiting EV production this year.

Without that, we would be seeing EV sales increasing from 3.2 million last year to over 6 million this year.

That is why the time is now to look for the top quality, low-carbon intensity nickel projects. These will be the projects that the Tesla’s and VW’s of the world will go to as they try to secure the necessary supply of green nickel.

HOW I AM PLAYING THIS

The underlying scoop here is that BHP will ship Ni instead of nickel sulfate. This eliminates the economic and environmental costs of converting to Ni sulfate, and Ni being 22% the weight of NiSO4 is about 5x cheaper to ship with 1/5 of the carbon footprint.

So yes, it is a good step towards more sustainable Nickel. However, when the nickel arrives at the cathode facility, it is first converted to sulphate then converted to hydroxide with all the sulfate going to waste using a tremendous amount of water along the way (sulfate waste = 1-2x the product stream).

There’s nothing novel about this. Much of the Chinese supply chain already does this when the economics favour it, and the Nornickel/BASF JV is based on a similar concept.

But none of these approaches solves the sulfate waste stream problem, nor the added cost and footprint of the required lithium hydroxide, nor the subsequent costs of additional steps to lithiate the metals and coat the cathode.

Nano One’s One-pot and M2CAM technologies takes this concept several steps further. it eliminates sulphate and its wastefulness entirely from the process.

They use about 1/20th of the of the water. We also enable lithium carbonate as a feedstock, thereby eliminating the added cost and footprint of converting to hydroxide. And they lithiate and coat the cathode all in a one-pot process without the extra steps and costs.

FPX has one of the largest undeveloped nickel deposits in the world in central B.C. Its unique geology–arawuite–means their nickel can be processed without smelting. I think it’s the greenest nickel on the planet, bar none. When the nickel majors start buying the juniors, this one should go first and should attract a high valuation because of its unique geology in a first world jurisdiction.