Two of the biggest, most successful gold plays in the world this year have been Eskay Creek in Northwest B.C. and the Central Newfoundland Gold Belt (CNGB).

And the only company with great land positions in both of them now is Sassy Resources (SASY-CSE / SSYRF-OTCQB). They just optioned a large, strategic land position (156 km2) in the play including a key claim block (Gander North) right beside (like, I mean adjoining) the Jonathan’s Pond discovery by Exploits Discovery (NFLD-CSE). Logistics are easy and cheap – Gander North has a paved road going right through it plus power, with upcoming drilling right off the main road.

Significantly, Jonathan’s Pond has Newfoundland’s highest-grade anomalies in glacial till at surface – 410,000 ppb or 410 g/t Au – and these anomalies trend onto Sassy’s Gander North, one of eight claim blocks they’ve optioned for a 100% interest. You couldn’t ask for a much better starting point than that. Keep in mind, seasoned Newfoundland prospectors consider 5 to 25 ppb Au till anomalies as very prospective for high-grade gold mineralization like New Found Gold’s (NFG-TSXV) discovery intercept (19 meters @ 92.9 g/t Au) at the Keats Zone 15 km southwest of Gander North.

Sassy CEO Mark Scott has structured this deal to give shareholders maximum leverage. All the Newfoundland properties are going into a wholly- owned subsidiary called (conveniently) Gander Gold Corporation, because he knows he should have a GREAT problem on his hands within the next two years.

That is, if one of these high potential assets – either his Foremore Property in the Eskay Camp or any of the Newfoundland claim blocks – are able to get to a maiden resource calculation, or there’s a big discovery, the spin-out options are compelling. ALL the value in a stock comes from its lead asset – even if the other ones are “pretty good” – but Sassy has just doubled its chances, plus it’s getting the drill bit turning in Newfoundland ahead of summer activity in Northwest B.C.

The Eskay Camp play had a big comeback in the last year as Skeena Resources became a 10 bagger, and Eskay Mining also had a HUGE run (I’m so happy for CEO Mac Balkam!). They were able to build on years – no, decades – of previous drilling & geological work.

Sassy’s grassroots Westmore gold-silver discovery in the southwest part of its Foremore Property is a large virgin piece of ground that had its initial drill program last fall. Results showed there is a big mineralized system there, and CEO Scott will be drilling it like Swiss cheese this summer.

It’s a “sassy” move into Newfoundland, though. The leader there is New Found Gold which exploded into its IPO last year with over a $100 million market cap on just one drill hole — but what a drill hole it was! They hit 19 meters of 93 g/t Au. That’s 3 OUNCES per ton. Then, just this week, they announced another hole of 24.8 g/t Au over 13.8 meters and 25 g/t over 10.3 meters.

And just as important as those great results are, NFG said they intend to list on the NYSE American exchange during the first half of this year. That will bring a HUGE investor base attention to this play.

I expect the CNGB to be The Big Gold Play in Canada in 2021. Many tens of millions of dollars will be spent here by a few dozen companies. Gander will probably turn into Stewart, B.C., or Red Lake, Ontario, where hotel rooms are impossible to get and residents will rent out their garage and a space heater for $300 a night.

Look, gold exploration is high risk. But not only can Sassy raise millions of dollars and still have a tight share count, they have Westmore and the broader Foremore Property (again, the only company with a major presence in both the Eskay Camp and Newfoundland).

In a perfect world, Sassy investors will get a spin-out company in 24 months with an incredibly sexy gold asset in Newfoundland.

Don’t forget Mark Scott’s background – he was head of Vale’s operations in Thompson, Manitoba. He has successfully managed large operations. He’s a do-er. Now he has two programs to run this summer, with a veteran team of geologists and strong financial backing.

I just think at an Enterprise Value of just $20 million in this market – with gold still doing very well at $1,850/oz – the upside potential here is remarkable with one good drill hole. They’re in elephant country, and both New Found Gold and Jonathan’s Pond are already elephants.

The team, the assets and now the valuation is here to make this a big winner for investors. Sassy’s Gander Gold has drill-ready targets. I think it’s one of the best drill plays I see in 2021.

DISCLOSURE–Sassy Resources has been a paying client of the Oil and Gas Corporate Bulletin in the past 12 months. 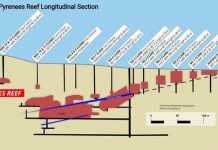