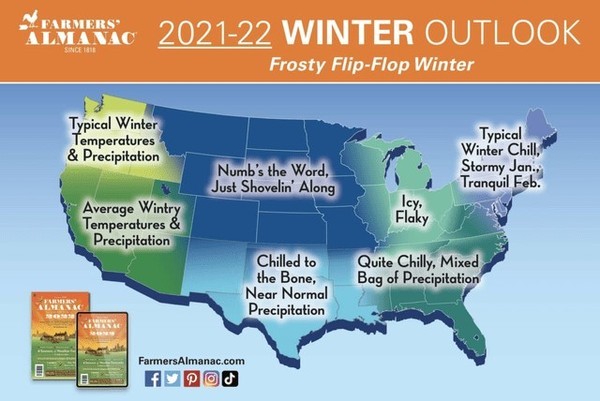 But the price keeps going up – and on days when the price goes down it is less than you’d think.

The forward curve looking at January 2021 has been on a tear since the spring: 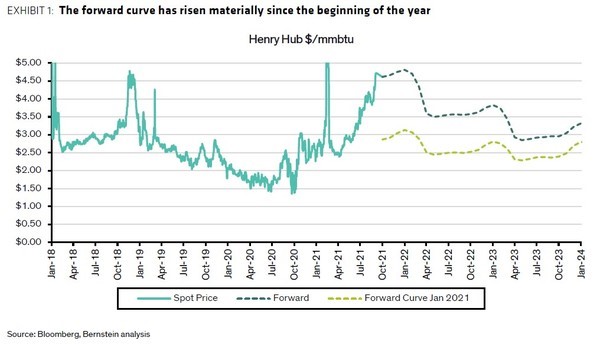 The signals are screaming strength, which means natural gas has our attention.

Where is this strength coming from?  As usual, a lot of it is storage.

Storage is below the 5-year average in the USA.  By the end of October, the beginning of heating season, inventories should be around 8% below normal. 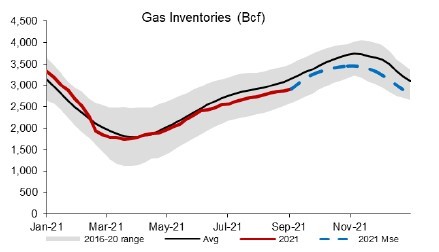 But that clearly is not the whole story.  Natural gas storage levels a touch below normal would not warrant a spike to $5.

Another piece of the puzzle is Hurricane Ida which took 2 bcf/d of natgas production from the Gulf of Mexico (GoM) offline.  GoM production is about 2.5 bcf/d give or take, so Ida basically wiped it out.  This happened in an already tight market, and that gave us a price spike.

But we all know hurricanes come and go.  The chart above is for January gas.  All that Ida production will be back online by then.  There is more going on than just a storm.

A big piece of what is going on stems from what is happening outside of North America.  There is a BIG natural gas problem overseas.

The United Kingdom has become the poster boy for natural gas shortages.   In the UK gas prices have gone up so much that two power producers have already gone bankrupt!  1.5 million homes are dealing with bankrupt providers.  And it isn’t even winter yet.

Reporter Javier Blas of Bloomberg, says that the UK is seeing its “highest ever wholesale electricity prices”.  The government is talking about the possibility of “rolling blackouts” this winter.

Steelmakers and zinc smelters in Europe are curtailing production “due to sky-high gas prices”.

Citi came out with a BIG forecast last week.  From Bloomberg:

“Citigroup Inc. more than doubled its Asian and European natural gas forecasts for next quarter and said prices could surge as high as $100 per mmBtu in the event of a particularly cold winter”

Now, as context, winter prices in New England can hit $100/mcf on a really cold day every few years (because FERC won’t approve new pipelines up in there, which is very ironic given that the Marcellus is so close). But that’s just for an hour or so.

Citi is talking about a trend. This is not an impossible call.  Look at LNG prices right now.  Prices are parabolic and going higher: 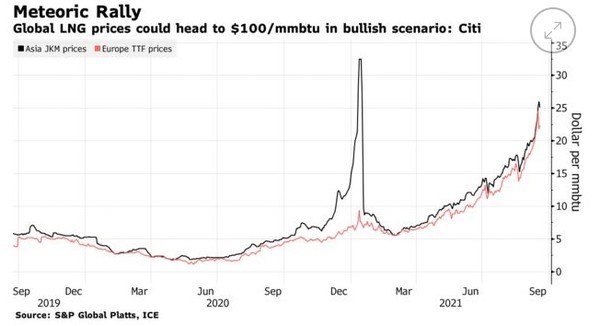 If you thought inventories in North America looked a little tight, it is nothing compared to Europe. 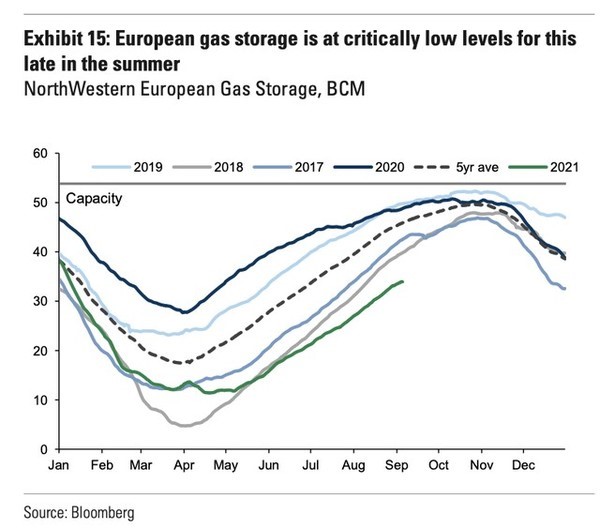 EUROPE COULD SUFFER THE WORST

If you do the math there is a very real possibility that Europe runs out of gas by next spring.

Europe’s problems begin with their renewable strategy.  As they rely more on wind and solar for electricity, prices are bound to get more volatile.

What we are seeing in the UK right now is largely because the wind is not blowing.  Meanwhile the coal plants that used to provide the baseload power have already been retired.

With mandates already in place across the world – in both Asia and Europe – this is only going to get worse.

Clearly, coal is not coming back.  Relying more on Russian gas is certainly far from ideal.

The only politically viable bridge fuel is LNG.

It is no coincidence that LNG buyers from Asia have been knocking down doors to shore up long-term supply.  These are the same buyers that were trying to get out of contracts a few years ago.

While US natural gas is not tied at the hip to international prices, the upward pressure from LNG is increasing.    This year may be the year where LNG finally drives North American prices – as two large LNG export projects come online. 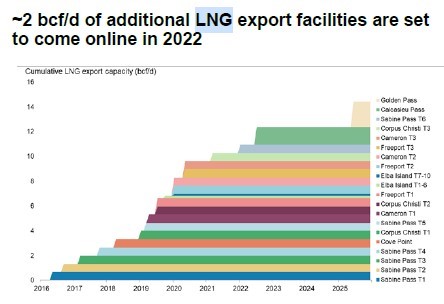 2 bcf/d adds up to and extra 700+ bcf of offtake over the course of the year.
The LNG “squeeze” out of Europe and Asia means new LNG export capacity will have no problem finding a home.

You can count that 700 bcf on the books – there will be no problem exporting LNG.

Counting in the LNG molecules led to a pretty amazing forecast from BloombergNEF back in July.

A hat tip to Calgary based SAF Group for first reporting that BloombergNEF forecast an end of October storage number of only 2.64 tcf in 2022. 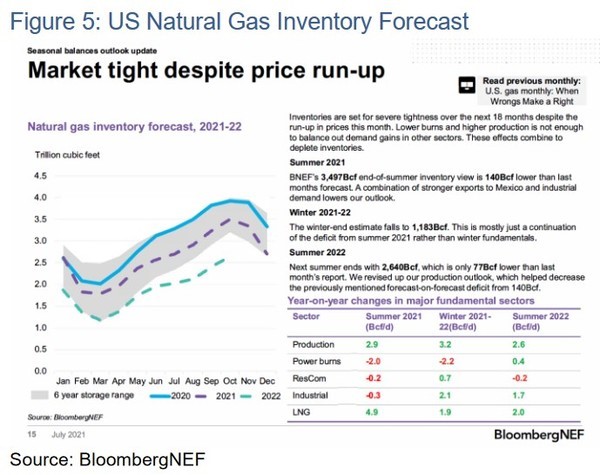 Remember this year we are looking at end of October storage of 3.4-3.5 TCF—trillion cubic feet.  Full storage would be 4.2 TCF

It does not take a genius to see that this kind of storage number would lead to much higher gas prices.  SAF Group pointed out that the last time gas storage was under 3 tcf, Henry Hub was over $10 – and that was 20 years ago, when demand was far lower.

We’ve got storage and we’ve got LNG.  But every chair needs at least 3 legs.  The third comes from producers.
Producers are showing discipline.

Overseas discipline is coming from Russia.  In fact, much is being made of whether Russian natural gas production is being artificially held back – that Russia is using their gas production as leverage over the battle for the Nord Stream 2 pipeline.

In North America, it is not political.  It is about returning cash to fed-up investors.  Knock on wood but it looks like producers have gotten religion – that they are not going to run up the rig count and flood the market.

What we are seeing so far in North America is remarkable restraint.  Rig counts in the Haynesville and Appalachia, which are the two primary dry-gas zones, have yet to recover to pre-Covid levels: 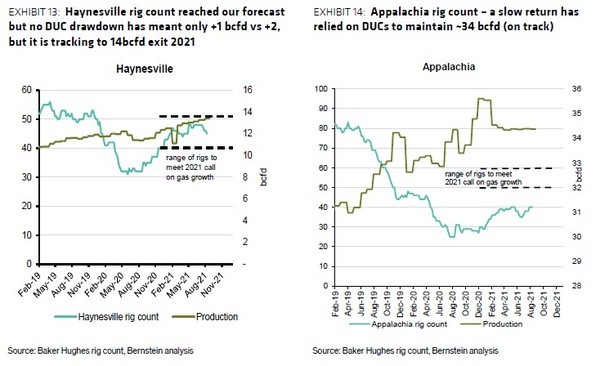 Some of this is structural.  In the Marcellus/Utica, you just can’t get the gas out.   Even if they wanted to, producers can’t produce any more: 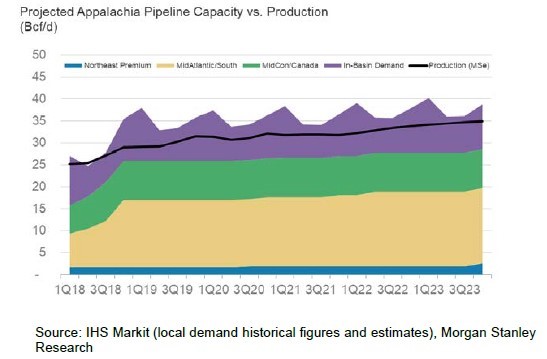 The same kind of discipline is happening with associated gas (natural gas from oil reserves) – the rigs counts aren’t recovering: 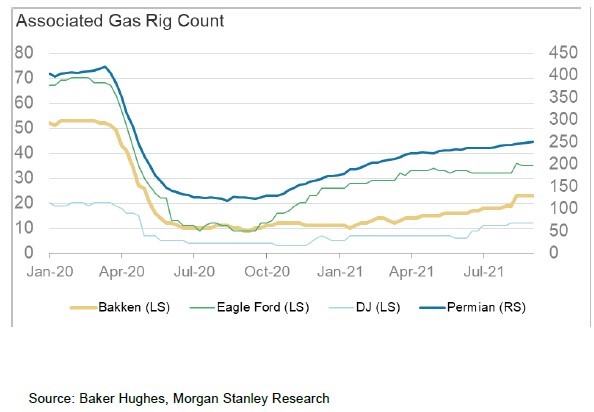 These 3 legs create the set up the winter for a potential “surprise”.

THAT is what natural gas prices are trying to price in with that $5 January price tag.

The reason it is only $5 is because as usual, winter is far from certain.

The latest NOAA forecast is not yet predicting a cold winter.  The probabilities are that the important gas consuming regions will have temperatures “moderately above average”: 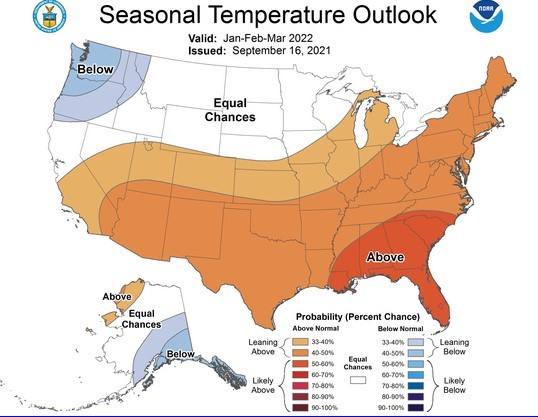 Above average is not going to cut it for a squeeze.

But – because this is weather no one will agree.  The Farmers Almanac says quite the opposite:

What you can say is–if we get a very cold winter, the United States could find themselves short of natural gas.

Now I know – if history has taught us one thing (and by history, I mean the last 20 years of natural gas prices) it is that natural gas producers can ramp up production if given incentive.

But on this timetable even the drillers can’t work magic.  January is only 3 months away.  You simply can’t drill and complete wells fast enough.

If it gets really cold this winter, we could see a BIG short-term spike in natgas prices.  Maybe not a Citi-lng-$100-gas spike, but a big one.

Natural gas futures don’t reflect this yet.  Because it is no guarantee.  If we see 70degF in January and there is no problem.

But $5 futures are telling you there is a chance.

The problem I see is that if we do get a big natural gas rally it may not have legs beyond 2022.

If you look at the big producers – Cabot, EGT, Southwestern – these guys are all FCF (Free Cash Flow) positive way, way below $5 gas. 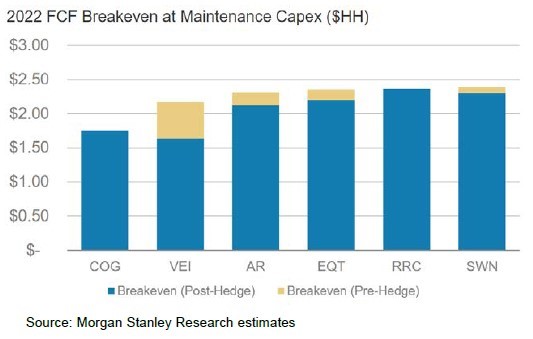 You can make a good argument that breakevens across the Lower-48 are under $3/mcf.

2022 will be a bump year for LNG.  But after that, the next big export terminal, Golden Pass, does not come online until 2025 at the earliest.

That means at least two lean years on the demand side.

Natural gas demand in North America COULD begin to face headwinds.  Biden’s plan to get solar and wind to 40% of the power grid may sound insane but you can’t deny that directionally, this kind of move is going to mean less natural gas demand.  Power demand is likely to fall below 20% of overall natural gas demand by 2030, from somewhere closer to 30% last year.

And on the other side of that coin, hydro power in the western US is much lower now with a drought going on.  I’ve recently written about how low US water reservoirs are there.

And it is possible (likely?) that all these renewable builds run into the same problems we see in Europe—meaning that natural gas takes on a greater role as “bridge fuel” as a result.

But even so, here in North America where the gas IS abundant, it is hard to see a “new era” of $5 gas as far out as the eye can see.  Breakevens are just too low.

Natural gas cried wolf and this time there really was one.  But – I’m not convinced that wolf is here to stay.  I think it’s more likely passing through.

That means gettin’ in while the gettin’s good.  For traders, there will be a time to take gains and move on–probably some time this winter.

But the trend of higher natgas prices may be here for a few years, as countries experiment with renewable energy strategies, and keep the lid on coal.