Can somebody tell me why the (Canadian) oil industry hates Justin Trudeau so much?

Alberta seems to think the Prime Minister has it in for them.  They’ve gone so far as to send a caravan of trucks across the country just to let him know how angry they are!

But I just don’t get it.  Don’t these people understand?

These companies are PRINTING MONEY – and who do they have to thank for a big piece of it?

You got it – Justin.

Oh sure, he’s bungled the pipeline debate to high heaven.  Overpaid for a pipeline that may never get built.  Praised the industry while stabbing it in the back with Bill-C69, which will make it much harder for any new pipeline to ever get built.

What is overlooked is that Justin has put an extra $10/barrel directly in each oil producer’s pocket.

How many times can you say a government gave a gift like that?  Not too often.

So how did Justin give the oil business such a boost?

Simple.  He has done his darnedest to make sure the Canadian economy underperforms.

And it worked!  Just last month the Bank of Canada slashed GDP growth forecast to 1.2% in 2019.  That is down from an already paltry 1.7%.  Bank of Canada Governor Stephan Poloz all but admits that rate cuts are in the cards.

A bad economy means a bad currency – and that’s good for Canadian oil producers.  The Canadian Dollar hit a four month low recently on the downbeat forecast from the Bank of Canada.

But wait you say – they Canadian Dollar is up on the year, right? Marginally.  That’s not so bad.

It’s true.  But it misses the big picture.

Oil prices surged more than 40% since the beginning of year.

The Canadian Dollar is a petro-currency.  As oil goes, so does the loonie. 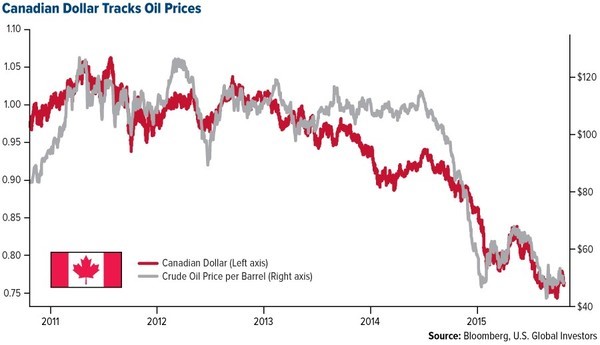 The historic correlation between oil and the Canadian dollar has long been accepted.  But over the last couple of years, and this year in particular, that correlation has entirely broken down.

There are a few things at play.

Laura Cooper, head of FX solutions and strategy at RBC Wealth, says that pipeline constraints are the culprit.  The lack of growth is keeping a lid on bullish oil sentiment and with it, any appreciation of the loonie.

Second, as Poloz hinted and many other economists have said, the Canadian economy is just not doing that well.

“Declining productivity” – that’s just another way of saying we are getting less competitive.

Which is exactly what you’d expect to happen with Justin’s policies.  It all means dim prospects for the loonie.

“We’re basically looking at a situation that is very difficult to find any positives for the Canadian dollar overall,” said TD currency strategist Mazen Issa “In fact, it’s probably going to continue to get worse.”

But wait.  It’s not all bad news.   The weak dollar is a BOON for oil companies.

Every cent of decline is another dollar in producers’ pockets.

Based on historic norms I would wager that with WTI at $65/bbl the loonie should be at around 85 cents right now.  Instead it’s below 75 cents.

That difference equates to a $10/bbl lift in prices for Canadian producers.

Subtract some royalties and the rest of that drops straight to cash flow.

By way of example, let’s take MEG Energy (MEG-TSX).  It’s a highly levered, mid-tier oil producer.  MEG generates a whopping $350 million in additional cash flow with the Canadian Dollar at 75 cents versus if it was at 85 cents.

Meg Energy has a $2 billion market capitalization.  That means that MEG is getting 15% free cash flow – directly from Justin!

This is just one example.  I could go down the list of Canadian oil companies and give you the same sort of numbers:  Crescent Point, Cenovus, Whitecap, and so on.

All that cash.  Stuffing their coffers.  They owe Justin so much.

But what thanks does he get?  How is he repaid for squashing the Canadian economy, killing productivity, just at the time when oil prices start to take off?

He gets nothing. No love. Life’s just not fair.
Keith Schaefer
Publisher, Oil and Gas Investments Bulletin