They are the industry killers.

When Dr. Andy Robinson and Robert Mintak set out to build a lithium producer together, they wanted a world-scale project, and they wanted it fast.  That meant no chemical risk, no permit risk, they wanted to be in production ASAP to take advantage of the HUGE profit margins that lithium producers are now enjoying (like, think costs of $2500/ton and pricing of $16,000-$21,000/tON).

Dr. Robinson knew every major lithium brine deposit in the world. He also knew the world’s top scientists in getting minerals and salts out of brines cheaply. Mintak is one of the only junior lithium exec to negotiate a deal with Tesla (TSLA-NASD), which he did in his previous company.

They are the perfect match.

And now, in less than a year, they have found a lithium-rich brine asset so massive—and already permitted and producing other minerals—that they can be in production before any of their junior peers.

Dr. Robinson and Mintak have had their finger on the fast-forward button ever since they joined Standard Lithium—just 10 months ago.

They could be the lithium industry killer—producing so much lithium so cheaply and so quickly—that they bankrupt everyone else’s dreams, and send all the lithium juniors (and I mean there are dozens) home to bed.

Because not only do they have big land packages, permits, partners and now buckets of cash–they will also be able to produce lithium in 72 hours from their raw brine.  Contrast that to everyone else’s assets in the Lithium Triangle on the Chile-Argentine border–where it’s a year to build brine ponds and another 18 months for lithium to concentrate via evaporation. 72 hours vs. 18 months.  There’s a no-brainer.

It’s a home-grown asset too—smack dab in the middle of the United States; right under everyone’s noses.

And would you believe that all their talent, experience, their scientific team—and now their industry killing production asset—is all in one small, $2 stock.

I bet you’ve never heard of the Smackover Formation.  But it is one of the largest underground salty aquifers in the world, stretching from the Gulf of Mexico, up through Texas and Louisiana all the way up into Arkansas. And now it’s going to be a big energy producer; soon to be providing enough lithium to help power millions of Electric Vehicles.

Other mineral producers are now pulling up over 350,000 barrels a day of Smackover brine in single operations. It’s bigger than the Permian.  It’s MUCH bigger than the Bakken. But those other operators in the Smackover are after calcium chloride and bromine—not lithium.

And in lithium brine terms, the Smackover is a few hundred percent  bigger than the world’s top lithium producer, Salar de Atacama in Chile.  See the size difference highlighted in the map below: 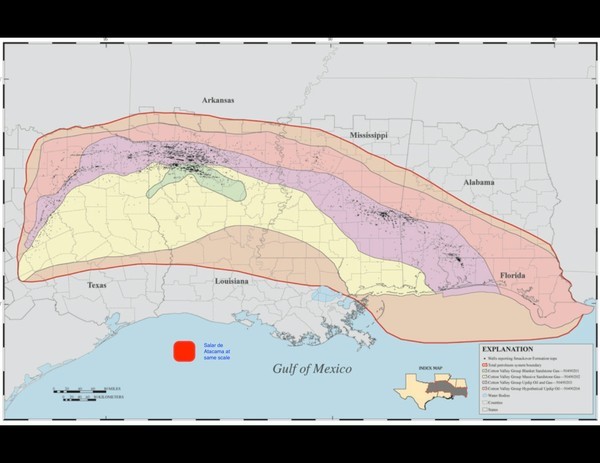 Understand what a game-changer the Smackover can be for the global lithium industry.  This massive asset can be producing huge amounts of lithium quickly:

Here’s how I think the lithium brine story will develop in 2018:  There are several groups now actively trying to extract lithium from oily, salty brines in North America.  Right now these brines produce many kinds of salts, and the lithium is an afterthought.

It’s like when Edison invented the lightbulb, or when Gutenberg made the first printing press, or when Daimler patented the first internal combustion engine–many groups were working on each of those inventions at the time, building off previous advancements.

The lithium industry is just tweaking current technology to extract the massive amounts of lithium in these brines. It’s a natural evolution…and Standard Lithium has the best and biggest team, with the most money, and an asset and partners ready to go.

I think that when Dr. Robinson and Mintak announce their 72 hour flow sheet in late Q3 2018–that will be to lithium what shale was to oil.  The Biggest Game Changer Ever.  That’s what I mean when I say…the lithium industry is about to get Smacked.

Standard’s deal in the Smackover covers a huge 33,000 acres. It would take years and millions of dollars to assemble that land package now. Just the Arkansas part of Smackover produced 250 million barrels of brine in 2013.

Which lithium producer is the winner in that scenario?

Standard Lithium.  High grade, infrastructure in place and 72 hour processing will make them one of, if not THE low cost producer of lithium in the world.. The low-cost producer in any commodity market always wins.

There’s more–the timing here is perfect for a US asset.  Just last month, US President Trump signed an executive order to streamline the leasing and permitting process for minerals deemed critical to the country—and lithium was on that list.

Of course, if you’re not a low-cost producer, that will only go so far.  But when you don’t spend 3 years and tens of millions of dollars assembling a land package and negotiating permits—when all you have to do is bolt-on a lithium extraction plant—your costs can be very low.

Arkansas is such the perfect place for this operation—local colleges actually have courses on how to be an operator in a brine facility. I am not making this up.  That’s how much brine processing is part of the culture there.  And Arkansas is a very low cost centre for business.

Standard Lithium has MANY near-term catalysts that will increase the company’s audience.

As you can see, there is a lot happening.  I’ve been watching lithium juniors—hardrock and brine—all over the world, ever since I got behind Lithium X at 40 cents in January 2016.

In those two years, I have never seen such a game changing team, process, asset—all wrapped into a micro-cap $2 stock.  And it’s right here in the southern heart of the United States…

…With a huge tailwind from a new US government directive to get all homegrown critical metals developed.

Standard Lithium is now funded, with a $20 million bought-deal financing. Partners and properties are in place.

In every bull market, one or two stocks get to double digits and become the bellwether stock of their industry.  Nobody has a better chance of achieving that than Dr. Andy Robinson, Robert Mintak and Standard Lithium.

Next post: You Won’t Believe How Cheap Commodities Are–Even After The Latest Run

Previous post: There Is One Chance To Secure Enough Lithium Supply – That Window Is Open Now