One of my most fruitful investing themes is—buy the smallest producers in the best oil plays.

And it’s one of the few times I’m willing to go really small—like, companies under $250 million market cap.

By definition, the best oil plays have great economics; wells that can payback quickly so producers can recycle that cash into a new well.

There has never been a better time to do that, than right now.  Small producers have been left for dead by investors since the oil price crash in late 2014, and with good reason. Small producers must conserve cash during periods of low commodity prices, so generally, their production and cash flow contract.

They basically get priced to bankruptcy. They are literally penny stocks.

But with US$60+ oil, these companies are making money again.  They’re drilling again. Investors don’t care—yet.

The reality is though, for small companies in big plays, even 1-2 good wells can have a huge impact on production, cash flow…and maybe now even stock prices.

I talk to institutional desks in Calgary and Toronto and there is a definite uptick in US and generalist fund buying in smaller oil stocks.

I showed you this chart a couple weeks ago that outlines just how cheap commodities are compared to the Market: 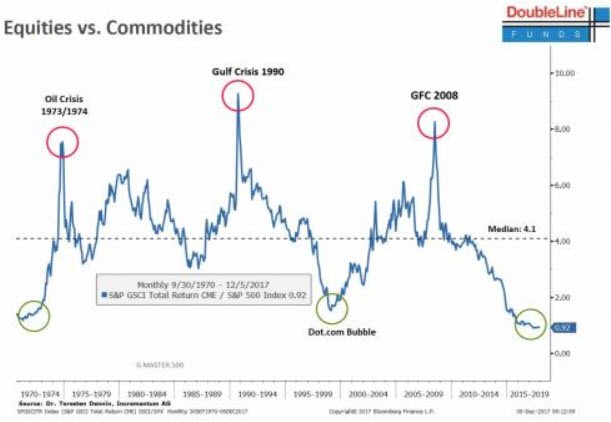 Commodities as a whole have never been so cheap.  We have seen Jeremy Grantham (a value investor) and Goldman Sachs (a promotional investor) have both been pounding the table on this.

Junior oil stocks are easily the most ignored group in that sector…but that will turn, and when it does, there will be some serious catch-up and investors will see some quick moves up.

I’m already seeing micro-cap oil names come up on the eight different morning letters I get from brokerage firms around North America.  They’re just little mentions of small companies with great management teams and good properties…but no critical mass yet.

So yes, The Big Money is starting roll down-market, getting their stock picks ready.  So it’s time to get positioned on a couple and be ahead of the crowd.

The only question is…which stocks will get the Market’s attention?

I’ll tell you the one I found. But first I want to tell you how I found it, and what I liked about it…so you can figure out how to research these companies on your own.

4) at the bottom of the Market.
Land in this play is now selling for very close to 10x what this micro-cap paid for it when oil was $28/barrel.

This management team actually used the bear market in oil in 2015-2016 to prey on much larger companies—who were going bankrupt.

This team raised over $40 million to put together their land package—bought from several distressed producers.  They were buying when there was blood in the streets. It impressed me even more they did it through friends and family; they didn’t use a broker.

Further research—through the share registry and in speaking with management—revealed they had a billionaire backer and two other oil families who are close enough to billionaires.  These strong shareholders put in money and exercised warrants without selling stock…so the “inside” ownership position in the stock is HUGE.

That’s why they were able to buy this land; nobody else had money and they had a billionaire backer whom allowed them to close deals very quickly—that always keeps the receivers happy.

This micro-cap is now funded, has one billionaire family and two near-billionaire families as the largest investors…with a great land position in one of the best US plays…and I’m going to tell you which one it is.

It’s the STACK play in Oklahoma. I consider the STACK to be the most under-appreciated play in the States because there are so few juniors in it…it’s dominated by Continental (CLR-NYSE), Marathon (MRO-NYSE), Devon (DVN-NYSE) and Newfield (NFX-NYSE)—and those companies don’t put out promotional releases.

Remember Continental’s Harold Hamm stopping work in the Bakken—where he became a billionaire—and moving all his capex to the STACK back in 2015 and 2016?  Here’s a chart that shows why—the rate of return in the STACK was the best in the USA: 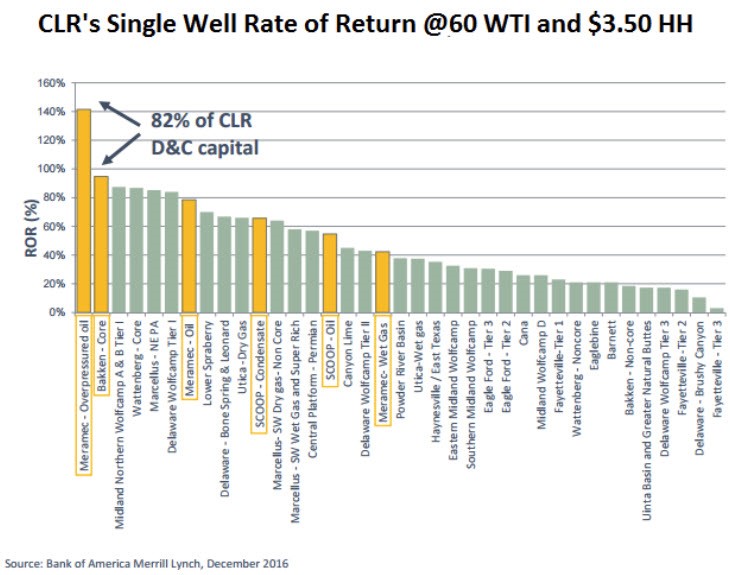 And not only is the STACK one of, if not the best play in the USA, I think it’s about to get a huge promotional boost.

You see, the legendary Jim Hackett came out of retirement to run Alta Mesa Holdings, (AMR-NYSE)—and it just started trading on February 9.

Hackett, who used to run both industry titans Anadarko (APC-NYSE) and Devon Energy (DVN-NYSE), did the exact same thing that former EOG CEO Mark Papa did: he formed a SPAC (Special Purpose Acquisition Candidate), basically a blank cheque public shell—he even named it the same as Mark Papa’s shell, Silver Run II—and they ended up buying 130,000 acres in the STACK.

Hackett and his team were given a blank cheque worth hundreds of millions of dollars and could go buy a big position in ANY play.  They chose the STACK.

This chart shows why; Alta Mesa is getting incredible growth out of the STACK: 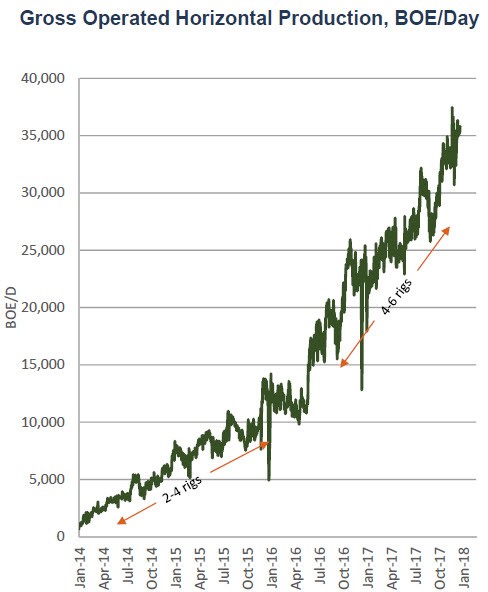 I expect Alta Mesa will attend a lot of industry and investment conferences in the coming months, getting their new name out there. My junior pick in this play will certainly benefit from all that noise.

The last reason I really like this micro-cap: They’re drilling themselves, right now.  The first set of drill results are likely no more than weeks away.

I think their timing here, and strategy, has worked out for investors.

1. Accumulate land in USA’s highest-return-play when oil and land prices are low.
2. Keep buying throughout the downturn.
3. Get funding from big money families with patient time horizons.
4. Drill when prices are at 3-year highs and oil is highly profitable again—but stock prices for these small producers are still on the floor.

So that’s my thesis.  Timing is right; team is right; asset is right. I’ll give you the name and symbol in my next story.