Home Top Stories Are You Positioned For A Big Bounce In Oil Stocks?

There is a hard bounce coming for the share prices of oil producers. Of that I’m sure.

The smaller the company, the bigger the bounce.

On October 3rd WTI oil prices hit a four year high of $76 per barrel. Then 15 months of a slow upward move in oil prices disappeared. 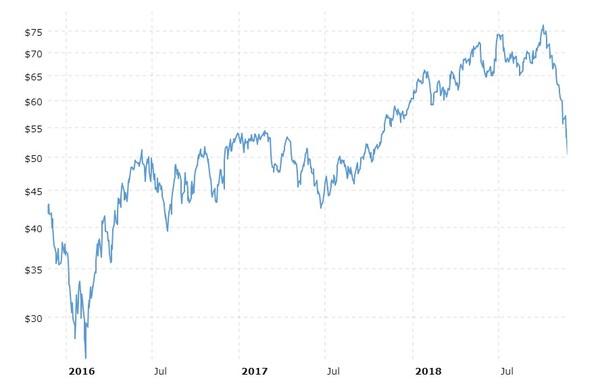 It took 15 months for the price of oil to go from $50 to $76 per barrel. Then it took just a couple of weeks to give all of those gains back.

What a volatile market.

The stock market took this big move and amplified it. The share prices of oil producers have moved even more… especially the little fish.

What drove oil prices down this much this fast? Increasing production out of Saudi Arabia and the US for sure, but big short term moves like this often have more to do with derivatives, and non-physical trading in oil futures.

Oft-times this kind of short term volatility has little to do with anything rational at all.

Welcome To Our Reality – Short Term Prices Are Set By Algorithms

The amount of trading being done in our public markets by machines with no human oversight has grown to staggering levels.

Company fundamentals, supply and demand, and balance sheets matter less than ever before.

Computations and calculations. Not free cash flow or dividends.

These are machines trading meaningless pieces of paper. There is no question this is a far cry from the purpose that our capital markets were created for… which was to give deserving companies the ability to raise capital at fair prices.

Earlier this year the Financial Times reported that money managed by purely algorithmic hedge funds crossed the $1 trillion mark. That is a $500 billion increase since just 2010. Both enormous amounts of money.

And that doesn’t include the trillions and trillions of dollars managed by mindless index funds and etfs. JP Morgan has estimated that today just 10 percent of the purchases and sales of stocks are completed based on actual stock picking.

Did you read that? 90 percent of buy and sell decisions are made with zero thought given to how a company is performing!

These algorithmic/robot trading platforms trade at lightning speed and at huge scale.

Increasingly stock prices are not being determined by what is happening with the underlying business. And with momentum being the key driver of algorithmic trading stock prices can get pushed further from what a company is truly worth than ever before.

That is the stock market. The oil market is no different except even more volatile since there are far fewer players in the game.

Small wonder then that when oil started down after hitting a four year high on October 3rd that the downward momentum got out of control.

What we all need to understand is that in the short term fundamentals mean less than ever before.

Which actually isn’t a bad thing for investors who can keep their stomach in check through the increased levels of volatility.

Here’s another interesting fact – professional traders now trade a huge – no, CRAZY – volume of energy futures each day. It’s over 33 times – that’s 3,300% – the world demand for oil. So think that world uses 100 million barrels of oil per day. The average dail trading volume of key energy futures is $330 billion. Talk about the tail wagging the dog.

But eventually the fundamentals do matter. The market will eventually get the price right. Yes a company can trade at 30 percent of what it is truly worth, but that can be rectified very quickly by an acquirer moving in to take advantage.

The opportunities that the algorithmic dominated market can create are actually better than ever. The only caveat is that the trip getting to that true value just involves a much bumpier ride, one that can take you a long way off course.

Oil and Shares Of Oil Companies Could Bounce Big

I’m not saying that oil prices shouldn’t have dropped.

That isn’t what I’m saying at all.

In fact the main driving reason that oil prices should have backed off is that the Saudis have increased production by almost 1 million barrels per day from six months earlier.

It really is as simple as that.

Despite all of the noise you hear in and around the oil market the price of oil still does go through the actions of Saudi Arabia.

Why the market chose to ignore the Saudi production increase as a non-event for months is also not hard to understand. The momentum for 15 months was to the upside… the algorithmic programs just keep pushing the oil price higher.

The momentum down has been violent but it is ending. The big bounce in the other direction is coming.

Saudi Arabia does not want $50 oil. The Kingdom needs higher than that.

It is no surprise that the reports coming out of Saudi Arabia are now detailing that Saudis WILL cut production to turn oil prices around. The rumored production cut would be significant – a million barrels per day.

We are already seeing the momentum in oil prices and shares of oil producers start to change. All that we need is one really positive piece of news like a surprise weekly inventory announcement or a public Saudi comment on production cuts. As soon as that happens the robot/algorithmic trading platforms will send the oil price and share prices of oil prices shooting higher.

The risk in this sector is now about not being positioned for the big bounce that is coming… especially heading into the G-20 meetings this weekend. The New York Times is reporting that there is a very real chance that President Trump will push for a compromise with China.

An announcement on that front over the weekend would add 1,000 points to the stock market and who knows how many dollars to the price of oil when trading opens on Monday.

I think there’s a good chance that the share prices of junior oil producers – that the algorithmic robots have been selling mercilessly for weeks – get a big reprieve.

These days it is all about momentum. The extreme volatility works in both directions. The next move will be headed higher.
Keith Schaefer
Publisher, Oil and Gas Investments Bulletin