Shell has a 7 percent plus dividend yield and believes it can generate three times as much free cash flow at $60 oil going forward than it did at $90 oil from 2013 through 2015.

If true, that has the makings of a company that you want to own.

Those are clearly some ambitious goals that the company has laid out and not everyone believes the Shell view of the future.

One smart investor is even betting against it.

Being a short-seller is hard, especially a professional one.

First–nobody likes you.  You have made it your job to say things that people don’t want to hear about a stock they own.

Second–making money at it is incredibly difficult.

I mean just look at that chart below….the game is rigged in the favor of The Long Investor! 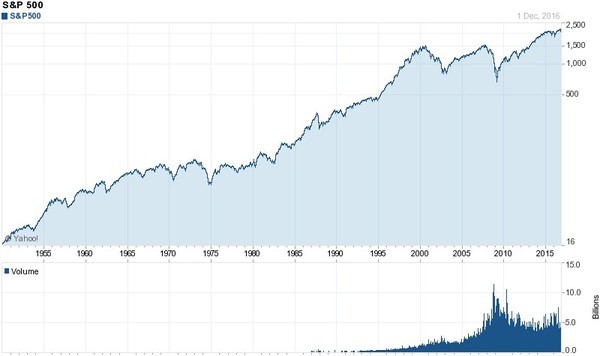 When it comes to making a living shorting stocks-Jim Chanos is “The Man”.  He started his hedge fund Kynikos Associates in 1985 and has ever since made his living primarily by picking stocks that he thinks are going to decline in price.

Lots of hedge funds short some stocks.  Very few do it exclusively.

Chanos has had some very high profile successes with Enron, Tyco and several companies exposed to the housing crash. He obviously takes his short positions very carefully and after a great deal of research.

Before owning a stock he is short an investor would be crazy not to at least listen to him.

One of the current short positions Chanos has is Royal Dutch Shell. 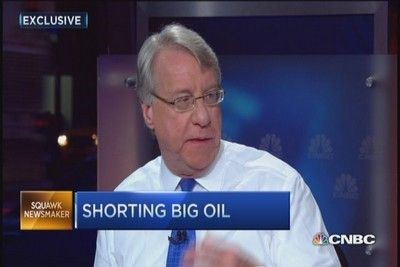 The fact that Royal Dutch Shell currently yields almost 7% tells you something.  The market has some serious doubts about the long term sustainability of that dividend.

Blue chip oil majors aren’t supposed to have dividend yields like this.

Looking backwards, it isn’t hard to understand where those concerns come from.

Last fall at Grant’s Interest Rate Observer, Chanos dedicated a portion of his presentation to his short bet against Shell.  He pointed out just how pathetic he thought the performance of not just Shell, but all of the majors had been in recent years. 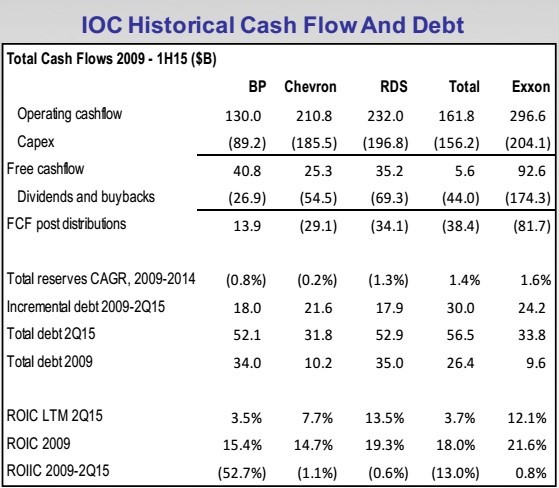 The table above is from Chanos and lays out the performance of these companies including Shell from the beginning of 2009 through the middle of 2015.

There are a couple of numbers that Chanos would have you focus on.

Over this 2009 through mid-2015 time period, despite for the most part enjoying the highest sustained period of oil prices ever, Shell (RDS) experienced negative post distribution free cash flow.

Shell outspent the cash it generated by a massive $34.1 billion.

Shell’s dividend was not even close to being supported by the cash the business generated at high oil prices.

If Shell spent a lot more cash than it generated the obvious question becomes where did that cash come from?

The answer for half of it is debt.

Shell started 2009 $35.9 billion in debt and ended the second quarter of 2015 with $52.9 billion.  As of the end of September of this year Shell’s long term debt had reached $75 billion with its BG Group acquisition completed.

That is a problem.  It gets worse when you consider the next ugly number.

Outspending cash flow is not unique to Shell.  What is a little more unique is that Shell managed to outspend cash flow by $34.1 billion yet still see a decline in its reserves.  Over the period in question Shell saw its reserves decrease at an annualized rate of 1.3%.

There isn’t much about this stretch of time that looks good is there?

Chanos Has Serious Doubts About Shell’s Future As Well

Shell itself doesn’t hide from its 2013 to 2015 performance or lack thereof.

The company can’t; it is very clear from the numbers.

Shell’s view is that the future is going to look very different.  As I noted earlier the company projects that going forward at $60 it can nearly triple free cash flow from what it was able to generate at $90 oil previously.

As you can imagine given his short position, Mr. Chanos doesn’t expect that to happen.

Instead Chanos believes that Shell has made a major mistake with its $53 billion acquisition of BG Group.  Chanos sees problems with both of the two key features that appealed to Shell about BG.

The first problem is LNG–Liquid Natural Gas. It’s where natural gas is reduced to 1/600th of its volume in liquid form at -160 degrees Celsius.

By combining with BG, Shell becomes by far the biggest non state owned player in the LNG game.  Chanos believes this move is not going to pan out as hoped for.

Chanos points to the fact that LNG demand has greatly trailed what was expected while LNG capacity is about to skyrocket.  Like oil and North American natural gas before it, Chanos sees an LNG glut coming. 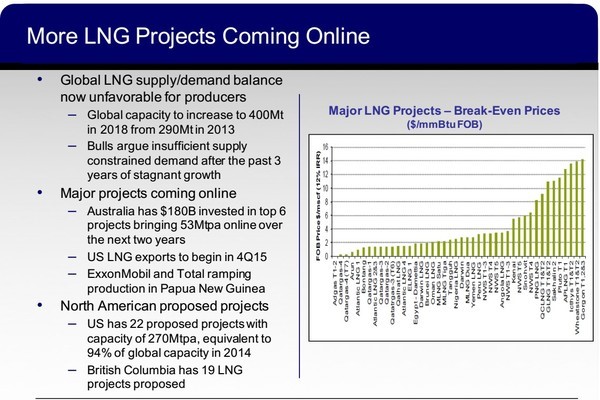 Chanos sees the abundance of capacity continuing to pressure LNG prices which have already taken a beating from the oil slide.  Chanos also notes that any restart of Japanese nuclear power could further suck a great deal of LNG demand away given huge role Japan has in the market.

Chanos also questions the wisdom of Shell’s interest in BG’s Brazilian assets which basically involves becoming a partner with Petrobras.

Petrobras has been in the center of the biggest corruption scandal in the history of Brazil.

Aside from the “lying, cheating and stealing” in the Petrobras, Chanos thinks partnering with Petrobras simply isn’t going to provide the future cash flow and reserve growth Shell is likely hoping for. 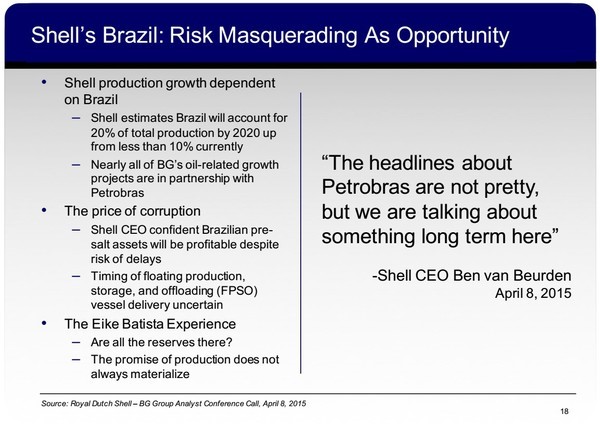 Chanos Is Good But He Isn’t Right Every Time

You have to admit that it takes some guts to go short a company that has been around since 1833 and is currently paying a seven percent plus dividend.

As a short seller, Chanos has to provide the cash to pay the dividend on those shares that he has shorted.  I’m sure he is aware that Shell hasn’t cut its dividend since 1945!

Like all of us the man isn’t perfect.  It could very well be that the oil crash has sparked a drive to cut costs that can transform Shell going forward.

Plus those gentlemen at OPEC could also have a major impact here in helping boost Shell’s cash flows.

Once again we are reminded why this investing business is never easy.