There are two very important energy stocks for investors to watch.  In Canada, it’s the large integrated oil producer Suncor—symbol SU on both the TSX and NYSE.  In the United States, it’s the large independent refinery company Valero—VLO-NYSE.
I think they’re important because I see the as them as energy stocks of last resort for global institutional money—The Big Money—in their respective countries.  As oil prices and stocks go down, most generalist and global funds that want to have some kind of energy exposure will retreat to those two stocks.

That’s why I think it’s important for investors to note that both these stocks have just broken out: 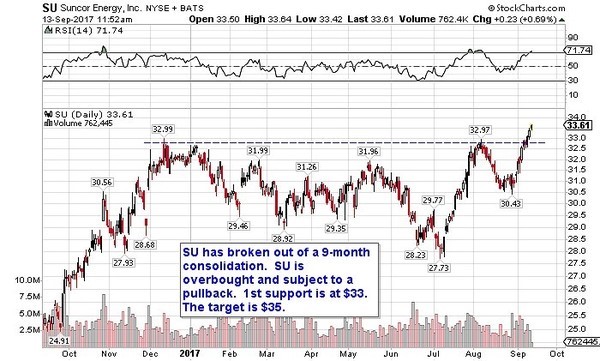 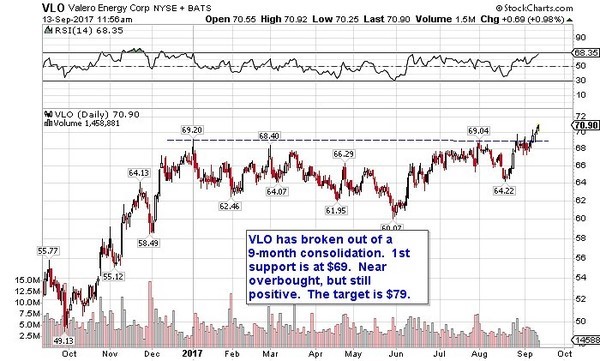 This is a solid indication that funds flow is coming back to the energy sector.

Now, I don’t invest in those big companies.  I invest in the juniors and intermediates that have more leverage.

I called around to the institutional desks in Toronto and Calgary, asking if there was an uptick in volume on my kind of stocks—and they said volume was definitely up this week, especially Tuesday and Wednesday.

Interestingly, it was a lot of accounts switching out of gas and into oil—to me that means the buyers are still the funds who are committed to energy; the generalist funds aren’t there yet.

And that makes sense; the whole point of this story is that The Big Money is just starting to come back to the sector, and both Suncor and Valero are the two proverbial canaries-in-the-coal-mine.

The way I’m playing this trend—I’m moving my investments out of the Permian now and back up into Canadian light oil stocks.  Canadian oil stocks are much more oily than in the US; it’s rare to find a US “oil” stock with more than 65% oil.  That’s mostly a function of the shallower geology; the deeper the hydrocarbons the more it gets cooked from heavy oil to light oil to liquids rich gas to dry gas.

Being as I’m still relatively bearish on natgas, it makes sense (to me anyway) to invest in Canadian producers.  They are actually realizing closer to benchmark pricing, and have had their multiples squeezed a lot more than the American stocks—making them cheap, with huge leverage to a rising oil price.

And if the oil price does keep rising, there will be a lot more charts like Suncor and Valero.