Talk about being on a roll!  Everything is now coming up aces for Canadian oil producers.

Christmas has come early this year.

I’ll tell you Three Good Things that have happened for these companies.

And perhaps more importantly The One Thing that hasn’t happened. 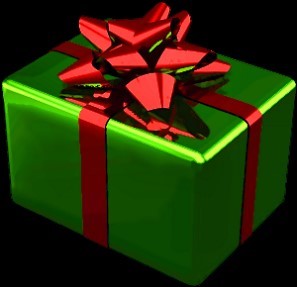 No one in Calgary is throwing a farewell party in honour of outgoing US President Barack Obama (unless outgoing is the theme).

After taking his sweet time with the future of the Keystone XL pipeline through a series of regulatory delays Obama just went ahead and put the kibosh on it in November of 2015.

As we all know there is a very new sheriff in town with a very different view from his predecessor on most things.  One of which would seem to be the Keystone XL

During his campaign when asked about the Keystone XL, President-Elect Trump said that he would “absolutely approve it, 100 per cent,”  There was a bit of a caveat attached to that–Trump also said he would ‘get a better deal’ in exchange for that approval.  But he also said that Mexico would be paying for a certain wall so we will have to see about that.

With Trump in place and Republicans now controlling both houses of U.S. Government–approval of the Keystone XL seems very likely.

Republican lawmakers had already attempted to push approval through Congress, so we know where the party stands on the issue.

Keystone’s benefit to Canadian producers would be its ability to deliver another 830,000 barrels of oil from Western Canada to the Gulf Coast Refineries.

That additional pipeline capacity would help reduce the discounted price that Canadian producers receive for their crude by as much as $5 per barrel according to analysts.  That $5/b would go straight to the bottom line—and get a 6-8x multiple in heavy oil stocks. It’s very material.

The Trans Mountain project will twin an existing pipeline and increase capacity from the current 300,000 barrels per day up to 890,000 barrels per day. Most importantly, it allows 900,000 bopd of Canadian oil to be sold on the world market, and NOT be beholden to US refineries.

Combined, these two pipeline expansions can add 1,000,000 bopd of pipeline capacity.  Then add in the Keystone XL and Canada’s pipeline situation has dramatically improved.

But of course there is more good news which came from a certain cartel…..

After two full years of continuing to crank up production into an already oversupplied market the gang at OPEC reversed course and has agreed to a production cut.

Santa Claus himself couldn’t have thought of a better gift.

Better still, the oil market believes that OPEC is serious judging by the price reaction.

Non-OPEC member Russia will cut by 300,000 barrels per day to make up the rest.

We can speculate all day about whether they will actually follow through with the cuts, but the fact is that last time they announced a cut in 2008 they most certainly did.

The Shocking (And Important) Part Is What Hasn’t Happened

The Canadian dollar could not have asked for a better news trifecta.  Each one of these events by themselves is major news for Canadian oil prices and therefore the economy.  To have all three happen in one month is incredible; remarkable.

Canada is a petro-currency; there is a chart below that shows how closely oil and the Canadian dollar–affectionately called the ‘Loonie’–trade with each other.

This huge set of big oil-related news for Canada should be very strong for the Loonie–yet it can barely get off the mat. 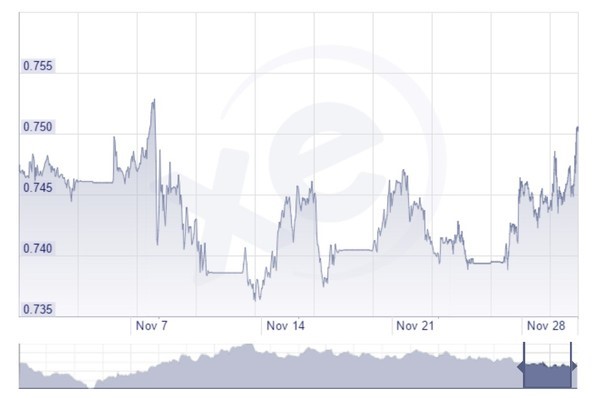 Against the U.S. dollar the Canadian loonie has hardly moved from where it was when the month of November started–and it’s only up one penny in the last couple weeks.  You sure wouldn’t guess Canada got 1 million barrels of new pipelines–half of which will head to Asia–from the CAD $ chart.

Making this even more surprising is the fact that the price of oil has spiked on the OPEC news.  WTI oil was $45 prior to the OPEC announcement and has since jumped by $6.50 or 14%. 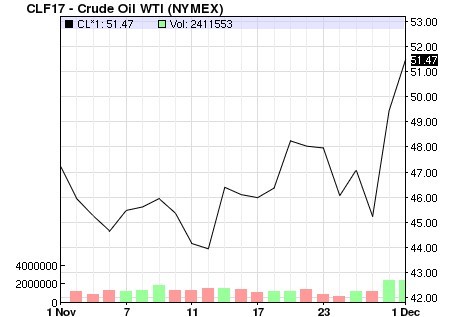 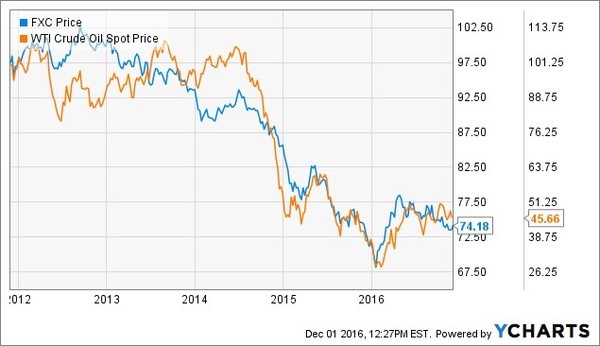 It hasn’t–and that is great news for Canadian oil producers.

No reaction from the loonie is the best reaction–the best Christmas present of all–for Canadian oil companies.

While these companies have revenues that are based on the price of oil in U.S. dollars–almost all of their expenses are in Canadian dollars. That is especially true for Canadian producers who have all of their debt in their home currency.

Those prices exclude the differential that Canadian producers receive, but the percentage increase of 14% is exactly the same.

Most importantly–almost all this 14% extra revenue goes right to the bottom line for the producers–since costs for these companies are in Canadian dollars and haven’t changed.

If these three major news announcements in one month can’t make the loonie fly–what really could?  To me it means the Canadian dollar will almost certainly stay low in the oil price range OPEC desires.

And that’s a great Christmas present to oil producers and their investors.

EDITORS NOTE–It wasn’t just US shale that Beat The Saudis–it was producers like this one, who have finding and development costs of $2/barrel.  The Saudis never saw it coming.  It’s my favourite oil producer in the world, and I think their next set of drill results are a game changer for the stock.  The name and symbol are right HERE.