Home Investing Where are the Bakken leaders Spending Money? Everywhere Else

Is The Bakken oil play dead in this low price environment?

Continental Resources (CLR:NYSE) and EOG Resources (EOG:NYSE) were two of The Bakken pioneers.  These companies were early movers in the play and amassed big, core land positions–and today have significant production.

The Bakken is what initially put these companies on the radar of investors.

You sure wouldn’t know that if you listened to their most recent earnings calls, or took some time to look through their corporate presentation.

The Bakken seems to be the last thing that these companies are interested in talking about.

That silence is screaming at us what the Bakken is worth at $45 oil.

It’s hard for investors to imagine, because The Bakken didn’t just transform North Dakota’s sleepy economy.  The million plus barrels of daily oil production that it added impacted the global oil markets.  Investors saw junior and intermediate producers from there get bought out for a total of tens of billions of dollars.  It was The First Big Shale Oil Play–and a truly incredible story. 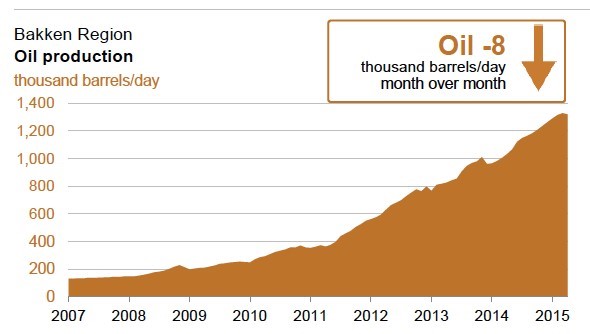 The growth of the oily Bakken, the gassy Marcellus and now the oily Delaware/Permian are the three biggest inflection points in US energy in the last decade.

But that was then, and this is now.  And now it doesn’t look so good for the Bakken

The industry now has four horizontal oil plays that can generate acceptable returns at $45 oil.

The Midland Basin, Delaware Basin, Alpine High–all 3 of them in the Permian in SW Texas–and STACK in Oklahoma all now have economics at $45 oil that few thought the industry could ever achieve.

Continental has two oil weighted plays.  One is the Bakken, the other is the STACK.  Continental’s SCOOP is a liquids rich gas play.

It is the Bakken that–for now–dominates Continental’s production and cash flow.

Continental has completely stopped putting any new Bakken wells on production.  The economics don’t justify it.

The company has wells that have been drilled (165 of them), but it isn’t interested in fracking them and producing them at these oil prices.

Almost all of Continental’s Q2 conference call was dedicated to discussion of the STACK and SCOOP plays.  The SCOOP and STACK also get most of the attention in Continental’s corporate presentation.  The Bakken doesn’t get its own slide until page 14.

The Last Micro-Cap in the Delaware Basin

I just updated subscribers Sunday night on how this tiny company could explode—this week! 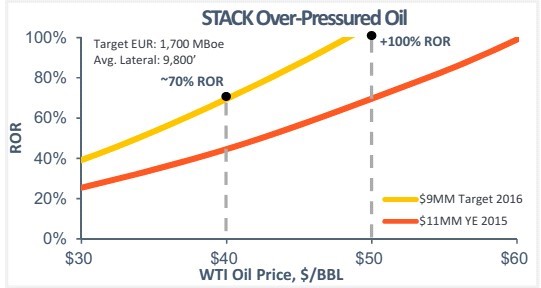 For the Bakken, Continental’s presentation shows much lower returns.  At $40 oil 2015 well costs have little to no positive return on the money spent.  Even at Continental’s 2016 targeted well cost the rate of return is only 20%.

Those returns by the way are half-cycle returns.  Nothing in there for land cost, for corporate salaries, for interest on Continental’s debt.  An oil company with those kinds of half-cycle economics has big problems. 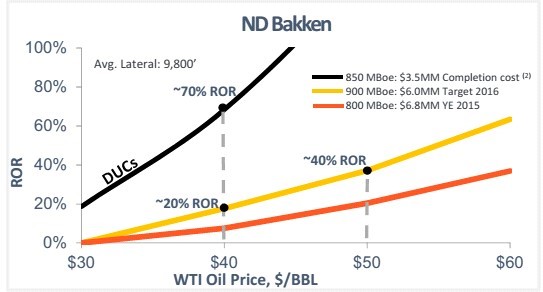 The picture doesn’t get all that much better $50 oil.  Continental’s best case for the Bakken shows a 40% half cycle rate of return and only a 20% rate of return with 2015’s drilling costs.  I would also suggest that any number in a PowerPoint presentation is going to be more than a little optimistic.

The STACK meanwhile appears to generate quite acceptable returns at $50 oil.

No wonder Continental is spending its time, money and effort on the STACK and SCOOP.

I sat and read through the EOG Resources second quarter earnings call.  I could not find a single reference to the Bakken in the question and answer session.

During the call EOG’s CEO was asked where the company would be allocating its capital in 2017 and beyond.  Here was his answer:

As we look into 2017 and forward, the capital spending will be – about 45% in the Eagle Ford, about 45% in the Delaware, and then about 10% in the Rockies. That’s a rough balance between each one of those areas.

Those numbers add up to 100%.  That means that EOG is not intending to spend any money in the Bakken in 2017 and potentially beyond.

Those opportunities in the Bakken are few and far between.  Well, not far between actually but isolated to the very core of the core. 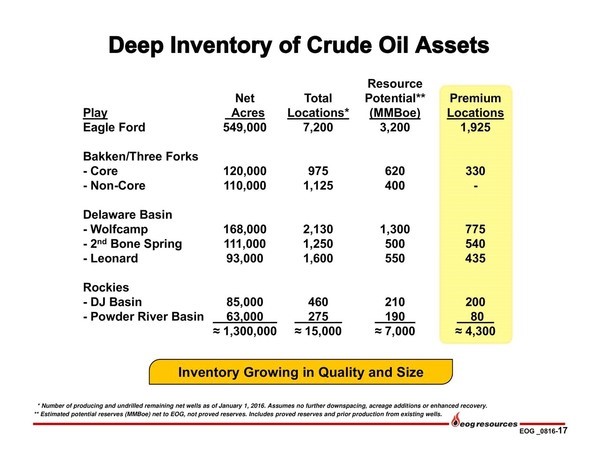 The Bakken has become a small piece of the pie.

If you consider the ratio of premium to total drilling locations of each play the Bakken clearly has the worst economics of the bunch.

Back To That Question…

So is the Bakken dead?

For any producer who can direct its spending elsewhere–the answer is yes.  Sure, the companies will milk existing production for cash flow but now there doesn’t seem to be any reason to send new money in that direction.

In my next article I’ll look at a couple of companies that don’t have that option….and what exactly that means for them going forward.