Metal prices have collapsed.  Oil is plummeting.  Natural gas and coal are struggling, and iron ore is on death’s door.

But right now, there is one commodity that everyone agrees will rise in price this year.

The Big Banks are piling into the idea. Analyst reports are appearing left and right touting the opportunity.

And it’s a real opportunity: demand is rising steadily and suppliers are racing to keep up, creating a very tight market that should keep prices strong.

The commodity is lithium, and its future is in energy.

There is likely a lithium-ion battery sitting beside you right now – perhaps several—because lithium-ion is the battery of choice for cell phones, laptops, tablets, cameras, and power tools. Lithium demand from these consumer electronics represents just under 30% of the current market, or about 53,000 tonnes of lithium carbonate annually.

Consumer electronics will need 4 to 5% more lithium each year for the rest of the decade. That means the world’s phones, tablets, and power drills will eat up 67,000 tonnes of LCE a year by 2020.

So even if demand for lithium stayed limited to industrial applications and consumer electronics, it would still ramp up 20% in just four years.

But it will not stay so limited. There’s a bigger side to the story. 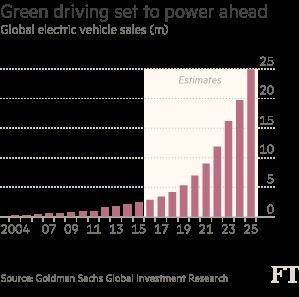 For every 1% increase in electric vehicle market share, Goldman Sachs expects lithium demand to rise by 70,000 tonnes per year.

Investors are looking at a dramatic lithium market expansion.

With oil getting cheaper every day—even in the long-dated futures curve—how can we investors be sure EVs will succeed?

Because governments are serious about supporting electric transportation.

Worldwide, they are spending US$16 billion to develop charging infrastructure, pay for EV incentives, and support research and development. As a result 14% of the cars bought in Norway in 2014 were electric.

And then there’s China. EVs are only 1% of the Chinese car market right now, but sales increased almost 300% in 2015.  China subsidizes almost half the purchase price of a new EV. There’s no sales tax.  They don’t need to win a lottery to buy one, and can drive it every day, not on odd or even days.

Even as lithium prices are now moving up, they only account for 2% of the total battery cost of an EV—so a big increase in price won’t impact the market much if at all.

Demand is rising. What about supply?

Together, these four produce almost all of the world’s lithium. All are diversified companies that enjoy making money from their lithium units, and to that all would like to expand operations.

But it’s not that simple.

SQM would love to boost its output, but instead its operations are running at only 50% of capacity. It is being stymied by a host of environmental and government issues that do not look to be resolved any time soon.

FMC is similarly running at only 60% of capacity, constrained by technical issues with its evaporation ponds and stressed relations with the local government. Relations are so strained that water was cut off to the mine at one point last year.

Albemarle wants to expand its Salar de Atacama operation but is struggling to earn permission from the Chilean government, which is concerned that depleting brines could impact nearby freshwater aquifers.
In other words, increasing output is not simple.

Existing operations are not enough. If supply is to keep up with the coming tsunami of demand, new capacity from new players needs to emerge in the next few years.

Brines only exist in select spots. In several of those places – read Argentina and Chile – brine mining is fraught. We’re talking about some of the driest places on earth, so water is carefully guarded and tapping underground brines raises concern that nearby aquifers will be drained or contaminated. Then there are the massive evaporation ponds, which no one much likes.

Hard rock deposits are more common, but they have to carry enough grade and sit in a way that mining is economic.

Looking across the list, there are 16 projects that could potentially reach production by 2020. Only three stand a chance of producing by the end of 2017.

More generally, it would be wildly optimistic to think all 16 will make it. But many are trapped in companies with broken balance sheets and inflated share structures.  They may or may not be able to raise money.

Here’s Citi’s take on the situation. 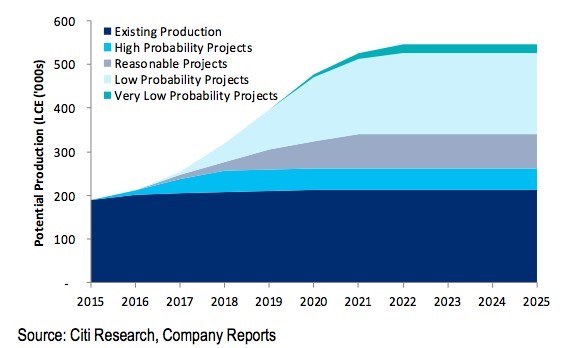 Compare that with the demand curve: 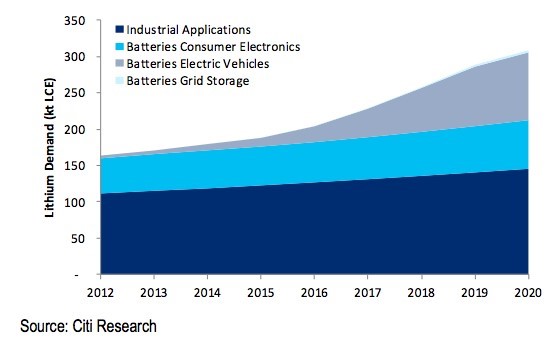 The market is very tight.

The more conservative forecasts have supply just keeping up with demand. As long as a mine or two manages to come on line each year until 2020, the world would have between 4,000 and 10,000 tonnes of LCE surplus each year.

Existing producers are struggling to use their existing capacity let alone expand, because of technical and permitting challenges.

Their struggles mean new supply growth will be up to new market players. Many will try. Some will succeed. Others will undoubtedly fail.

That means two things:
1) a very tight lithium market will support strong prices
2) to profit off those prices, investors will have to bet on the best in the business – the ones that will make it.

Lithium doesn’t have an open price like oil or copper; rather it’s negotiated directly between buyers and sellers.  On the official side, FMC (FMC-NYSE) announced a 15% price increase across the board on October 1st.

On the rumor side, there has been lots of chatter about lithium carbonate selling for US$6,500 per tonne of late. Many say prices have been even higher in parts of China where supplies are already tight.

“Lithium is a very opaque market, making accurate pricing data hard to come by. What I can tell you is that…the “Big 3” have signed a few full year 2016 contracts in the low $6,000 range, however most customers around the world will pay substantially more than $6,000 per tonne for lithium carbonate this year.” Joe Lowry, independent lithium expert.

Indeed, recent stories tell of spot transactions at $10,000 per tonne. And analysts resoundingly agree that prices will remain strong until the end of the decade – even if the precise price remains veiled.

Lithium will power the world’s ballooning fleet of electric vehicles. It energizes your smartphone, your power drill, and your camera. It is needed to manufacture ceramics and glass.

It’s the kind of very real supply-demand equation that bankers and brokers love – and haven’t seen in years. They are piling in. Junior companies are jumping aboard as well, snagging potentially prospective lithium properties.

It has all the makings of a multi-year bull run, driven by the world’s ‘new gasoline’. And this is just the first inning of this run.

Investing in the right company, or really the right management team, can make you rich.  In my next story, I’ll tell you the name and symbol of the company I’ve invested in, because the Chairman has done it before—creating a 10 bagger, a 15 bagger and a 20 bagger in his last three companies.  That’s life-changing wealth. And each time it only took him 2 ½ years.