Home Energy Services Will This Factor Turn the Tide for Natgas Prices?

Is This “Biggest Factor” Silently Charging Up The U.S. Natural Gas Market?

Mexican natural gas imports from the US will keep increasing through 2016 and 2017, to the point where Mexican demand could be 9% of US production with two years, up from the current 3.5%.

The chart below shows the trend clearly. Since November 2014, U.S. natgas exports to Mexico have jumped by over 67%. That’s 1.3 billion cubic feet per day more natural gas heading south of the border than we were seeing just a year ago. 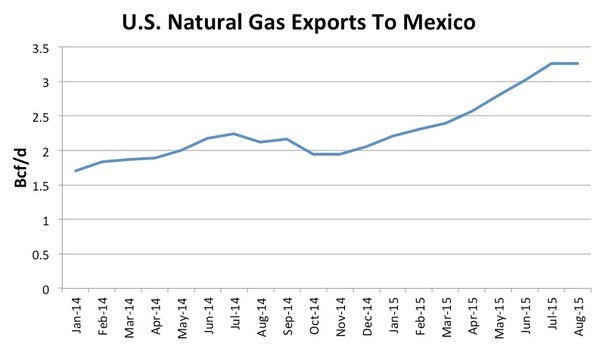 As of August (the last month that the U.S. Energy Information Administration reported export data), pipeline exports to Mexico stood at a total of 3.26 billion cubic feet per day–equating to 3.5% of total U.S. production, which hit 94 Bcf/d in August.

At those levels, the numbers on Mexican exports are starting to look significant as a potential driver of prices (which, remember, are set on the margins of the overall market).

The thing is, imports could rise even further from here—and in a relatively short period of time. Just look at some of the new projects already underway to increase export capacity.

The biggest driver of rising natgas exports over the past year has been a mega-project called Los Ramones. It’s a pipeline running from south Texas into northern Mexico—the map below shows the route (labeled “5”), along with a number of other proposed Mexican pipelines. 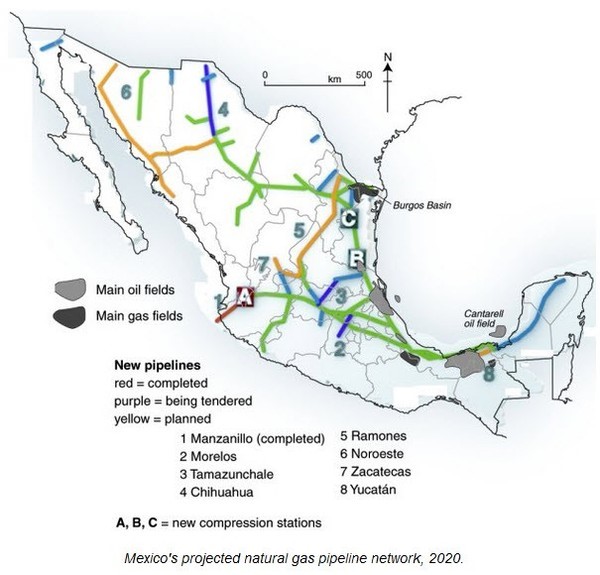 Los Ramones was connected to U.S. gas supplies via the NET Mexico pipeline on the American side in December 2014. With the total capacity of these lines being a very significant 2.1 Bcf/d.

That number is a little misleading, however. If you look closely at the graph above, you’ll notice that after the start-up of Los Ramones last December, exports have only increased by 1.3 Bcf/d.

That’s because even though the U.S. side is capable of delivering 2.1 Bcf/d, the Mexican section of the Los Ramones development is right now only able to take 0.7 Bcf/d—which in addition to a few smaller projects has added up to total export growth of about 1.3 Bcf/d.

The reason that Los Ramones isn’t running at full capacity is that pipelines activated last December were only Phase I of the mainline development. A second phase, Los Ramones 2, is currently under construction. This part of the pipeline network will deliver an additional 1.4 Bcf/d of natgas into central Mexico—and will allow U.S. exports along this line to finally reach full capacity of 2.1 Bcf/d.

Mexico’s national energy firm, Pemex, says Los Ramones 2 is on track to be completed in December 2015—meaning we should see it ramp up to fall capacity during Q1 2016.

That start-up alone would very quickly increase overall natgas exports to Mexico by over 40% from the 3.3 Bcf/d that’s currently being shipped. Bringing total exports to 4.7 Bcf/d – or 5% of current U.S. production (94 Bcf/d). That’s starting to get serious in terms of being a potential driver for prices.

But the line-up of new export projects doesn’t stop there. After the Q1 2016 commissioning of Los Ramones 2, the San Isidro-Samalayuca pipeline from New Mexico into Chihuahua state is expect to start up in July 2016—adding another 1.2 Bcf/d of capacity.

Then in 2017, more projects are on tap. Including the Ojinango-El Encino, Nueva Era, and CFE Tuxpan projects—which will add 2.6 Bcf/d of additional capacity. These are already tendered and expected to come online in the first half of 2017—meaning that within 18 months we could see total U.S. exports rise to 8.5 Bcf/d, or 9% of total U.S. production.

Another key event to watch here is another pipeline running from Brownsville, Texas underwater through the Gulf of Mexico, to Nueces, Mexico. Developers are submitting tenders for the project this month—and an award is expected in December.

This is a big one—with planned capacity of 2.6 Bcf/d. And it has a planned commissioning date of June 2018, which would bring U.S.-Mexico exports to over 11 Bcf/d in less than three years. That would make Mexico as big a user of American natgas as the states of California and Florida combined.

So what does this mean for U.S. natural gas producers?

Certainly the extra demand will be good for the overall supply-demand balance. But don’t expect exporters to Mexico to reap windfall profits right away.

As the chart below shows, prices paid for pipeline exports to Mexico have consistently been running about $1 per mcf below Henry Hub spot prices. Which makes sense, given that Mexican buyers are largely making purchases on long-term contracts—locking in attractive pricing in exchange for the offtake commitment. 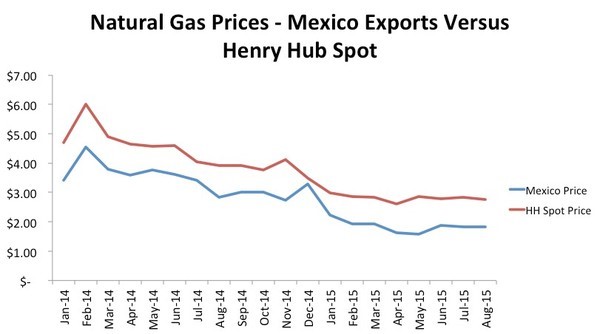 Gas exporters therefore aren’t going to strike it rich simply by tapping into the Mexican market. It’s going to take time for exports here to add to overall demand, and thus put upward pressure on prices.

On that front, it’s interesting to note that prices have generally been much more stable (flat rather than falling) since the big Los Ramones pipeline came online in December 2014. We may thus already be seeing Mexican demand shoring up pricing (albeit at a relatively low level), which could be the first step in setting up this downtrodden commodity for a rally.

EDITORS NOTE—Mexico needs more energy.  That’s why it’s importing more US natgas, and opening up its oil industry to foreign companies.  The best way to play this macro trend is THIS STOCK.  Its next big catalyst is less than a month away.