Where Americans Should be Investing Right Now

The Canadian dollar has dropped 25% against the US dollar in the last 18 months, going from 94 cents to 71 cents.  That’s horrible news for Canadian drivers, as the lower loonie (as Canada’s dollar is affectionately nicknamed) has almost completely eliminated any savings at the pump, while oil prices dropped from $110 – $37.

But for Canadian light oil producers–and their investors–it has shielded them from even more pain.  For those lucky few producers, this chart is their favourite one in the world right now: 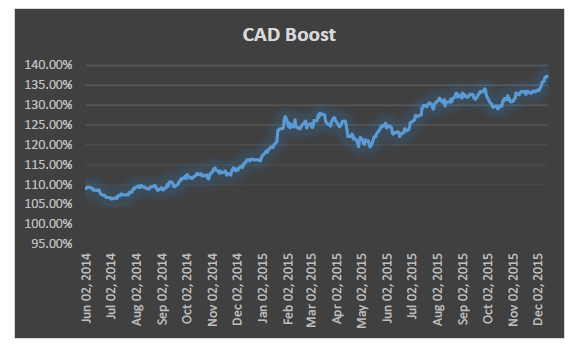 Source of Data: Bank of Canada

That is the “boost” to cash flow that Canadian light oil producers are getting—and heavy oil producers to a degree—thanks to a loonie that has gotten weaker and weaker since the oil price started to falter 18 months ago.

More revenue, but no difference in expenses–as Canadian light oil producers with Canadian properties have expenses that are paid in Canadian dollars.  Those would include salaries, royalties, drilling costs, interest and everything else.

A strong U.S. dollar therefore helps revenue, but has no impact on expense.  That means more profit!

Back in July 2014, these Canadian producers were getting a 5-7% boost to revenue because of the exchange rate differential.  Today that boost is close to 40%.

The chart below tracks the WTI oil price in both US and Canadian dollars.  The spread between the two has widened as the loonie has weakened over 2015. 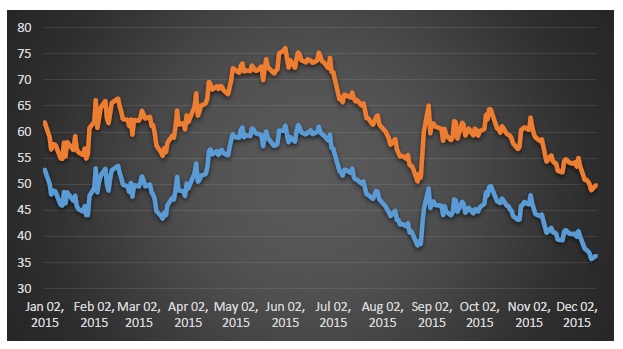 Source of data: EIA and Bank of Canada

The graph shows how significant this exchange rate boost has been.  With WTI  sitting at $35 per barrel right before Christmas—and the exchange rate nearly 1.40—WTI in Canadian terms is nearly $50 per barrel.

The chart above is simplified of course, as it just takes the WTI price and multiplies it by the exchange rate on each day.

In the real world the Canadian light oil producers must also deal with a differential price from WTI.  That differential over time should generally equal the cost of transporting the oil from Canada to the WTI pricing hub in Cushing Oklahoma.

The cash inflow difference for a 40,000 barrel per day Canadian producer of light oil at the current USD WTI prices because of this exchange boost would look like this:

If the loonie was trading at parity with the U.S. dollar today a 40,000 barrel per day light oil producer would be generating revenue of $472 million.

With the loonie at 1.395 that same producer is generating $657 million.

That is a $185 million difference in revenue almost all of which will flow through to cash flow since costs are based in Canadian dollars.

For a producer in that situation the weak loonie has been an enormous benefit.  I’ve focused on light oil producers for this story as the big heavy oil producers have to buy a lot of their equipment and capex in American dollars.

But it’s still bad–the rate of bankruptcies in Calgary is now occurring at a depressing rate.  A large percentage of the companies in this industry were built for $90 per barrel oil, not $30 per barrel.  Very low natural gas prices has only worsened the issue.

But without the help from the weak Canadian dollar it would be even worse.

An Interesting Proposition For American Investors

Just as the price of oil and the U.S. dollar have a very direct inverse relationship the Canadian dollar and oil are joined at the hip.

Since February of 2015 the correlation between the loonie and oil has been 94%. 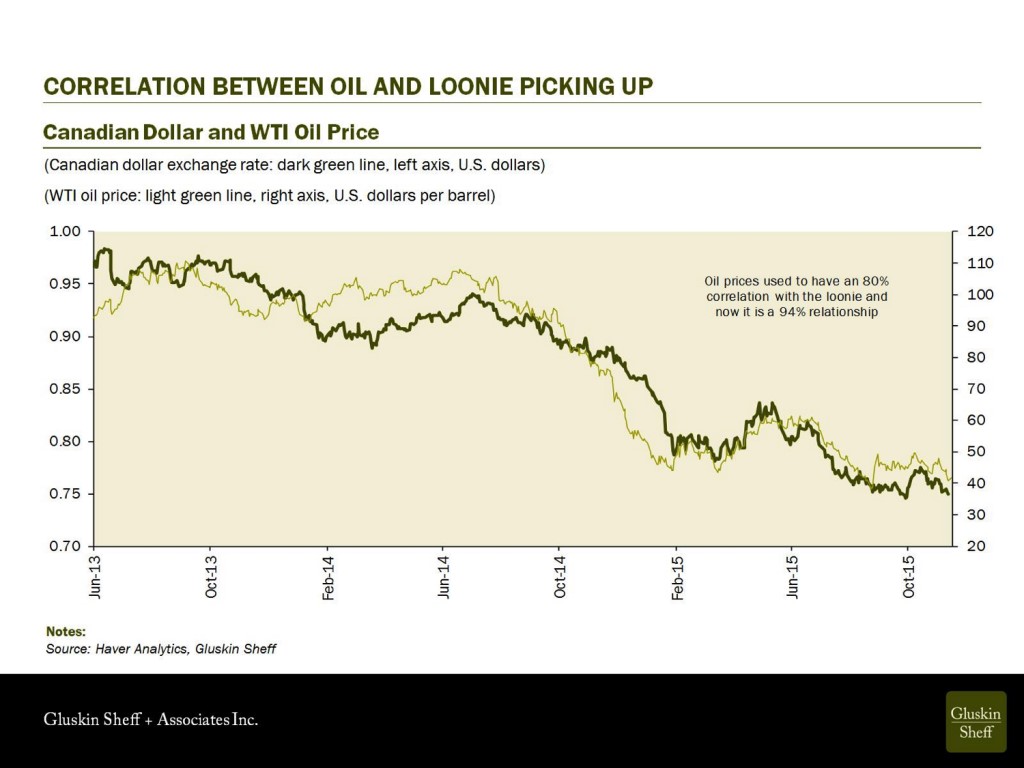 Canadian light oil producers have seen their stocks crushed, despite the loonie collapse and better balance sheets than their American counterparts.

That might create an appealing opportunity for American investors who want long term exposure to oil.  Here’s why:

Let me walk through the leverage that exists here for American investors.  I’ll use Whitecap Resources (WCP-TSX) as an example (I am not long).  It’s a high quality Canadian light oil producer with a balance sheet that is built to last. It produces roughly 40,000 boepd and 77% is oil and other liquids.

The return or American investors in US dollar terms is likely to be considerably better.  If oil heads higher almost assuredly so too will the Canadian dollar.

If the share price above in Whitecap takes place and the Canadian dollar also strengthens from $1.40 to $1.20 (a fairly reasonable assumption if oil goes to US$60WTI) an American investor holding Whitecap is going see his shares increase from $6.35 USD to $11.08 USD (the $13.30 CAD share price at a 1.20 exchange) which is 75% gain.
That would be a powerful double reward.

The cherry on top of a company like Whitecap is that is pays a monthly dividend in Canadian dollars of $0.0625 which on the current share price represents an 8.5% yield.  A yield which would also increase for U.S. investors if the loonie strengthens.

This investing thesis is fine for foreign investors—but only for a select group of light oil producers in Canada.  Heavy oil producers and particularly oilsands producers do have a lot of costs in US dollars; oilsands has very high upfront costs.  And heavy oil gets a much lower price than light oil; Canadian heavy oil touched US$22/barrel right before Christmas.

Since only 20 percent of Canadian oil production is light oil there are really only a handful of companies with solely light oil in their production mix.