But it hasn’t worked out that way–so far, the Eagle Ford is unique.  What I mean by that is..it’s the only Big Shale Formation in the US where oil production really is collapsing like The Market expected.

By contrast, stats from the North Dakota Oil Commission shows Bakken production only showed its first Year-Over-Year decline in September–1.162 million b/d in Sept, which was down from 1.188 million b/d in Aug.

The Eagle Ford is very different.

Production in the Eagle Ford peaked in March and has been dropping ever since.

The rate of that production fall isn’t slowing…..it continues to accelerate.

The EIA data can be found in the Administration’s monthly Drilling Productivity Reports.

Here is the month on month production change that the DPR’s have shown for the Eagle Ford since the start of 2014: 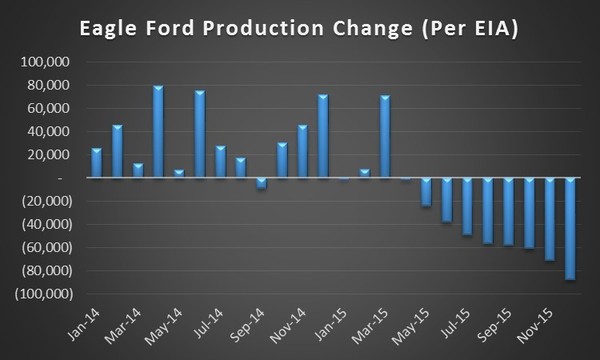 For the month of December alone the EIA believes that Eagle Ford production will drop by 78,000 barrels per day. 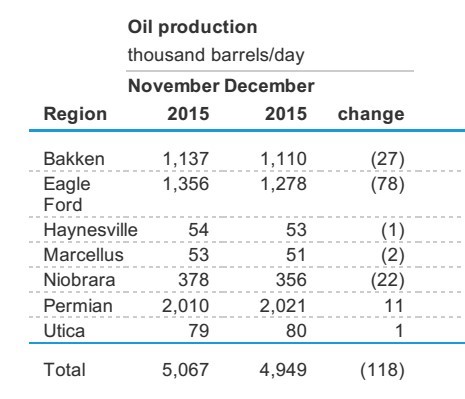 On a projected December 1 beginning production base of 1.356 million barrels that is a pretty startling drop of 5.7% in just one month.

The DPR reports show that Eagle Ford production topped out at 1.726 million barrels per day in March and will exit December 448,000 barrels per day lower at 1.278 million.

If the EIA’s numbers are accurate this means that more than one quarter of the Eagle Ford’s production is gone in nine months!

Drilling Into The Decline Rates

Why is the Eagle Ford declining faster than the other plays? Is it the declining rig count?

But digging into the EIA data shows the rig count decrease across the three major shale plays is actually very similar.

The Permian rig count is down by 55% and the Bakken and Eagle Ford are both down by a little more than 60%. 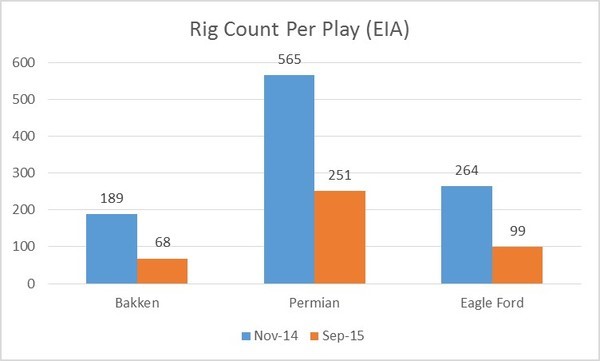 So it isn’t the rig count. What is killing Eagle Ford production is its decline rate.  Existing production in the Eagle Ford is falling at a much faster rate than the other plays according to the EIA. 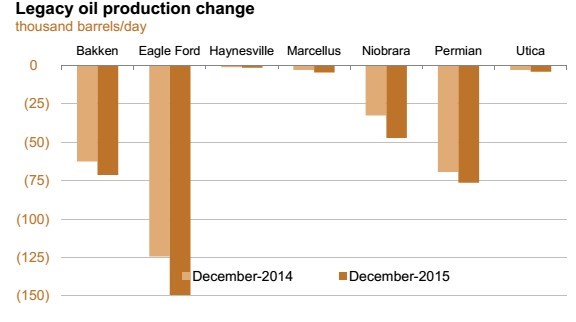 The Permian’s 2 million barrels of production at December 1 are expected to decline by 75,000 barrels per day during the month.

Talk about needing to run fast just to stand still.

The decline rate of existing production in the Eagle Ford is 75% higher than the Bakken and almost triple the Permian.

Without a frantic rate of drilling new wells, it is no surprise that overall production in the Eagle Ford has to decline.

Earlier this month at the Baird 2015 Industrial Conference Pioneer Resources (NYSE:PXD) made the comment that they wouldn’t be surprised if they were completely out of the Eagle Ford within five years.

Instead Pioneer wants to focus on the Permian which according to the company “is the only American oil play that go grow over the longer term.”

You have to wonder how much the Eagle Ford’s decline rates play a part in this line of thinking.

I see a couple reasons why Eagle Ford production is decline faster than both the Bakken and the Permian.

First, the Permian is not a pure horizontal or shale play.  Before horizontal drilling took off the region was already producing 900,000 barrels per day from conventional wells.  That base of production is very mature and declining very slowly.  That masks the true rate of decline of the Permian’s horizontal production.

Second, part of the reason that the Eagle Ford is declining faster than the Bakken is because it is a younger play.  Bakken production started climbing several years before the Eagle Ford did.  Younger production means higher declines and heading into this year the Eagle Ford had a huge surge of new production that is coming down very quickly.

Third, every play is different.  In fact every well is different.  With the high amount of condensate that the Eagle Ford throws off it is quite likely that a typical Eagle Ford horizontal well does decline faster than its Bakken and Permian counterparts.

How Much Is U.S. Production Declining Outside The Eagle Ford?

In their third quarter earnings release Core Labs (NYSE:CLB) gave an update on where they see U.S. production exiting 2015 at.  Since Core Labs has access to better information than almost anyone, their view is at least worth a listen.

The Company continues to anticipate a “V-shaped” worldwide activity recovery in 2016 with activity upticks starting in the second quarter……U.S. production continues to fall from its peak in April 2015 and the Company now believes production could fall by over 700,000 barrels per day by year end 2015.

If these numbers are close to being accurate the next question to ponder is how long can this rate of decline continue?  We know that over time the decline rates in horizontal wells lessen.  But we also know that the rig count is still dropping.

As per usual, oil market data provides as many questions as answers.

One thing that seems clear from the EIA data is that the Eagle Ford is the least “sustainable” of the three major shale plays.

It may also be the key to an oil price recovery.