Home Energy Services Is the Oil Market Getting Hoodwinked?

Is the energy sector under-reporting oil demand?  Some recent research suggests that’s possible—potentially by a lot—as in 1.2 million barrels of oil per day (bopd).

For oil bulls, that’s not enough right now to sway oil prices.  But it could mean the market is tighter than everyone thinks.

And that wouldn’t be hard, as incredulous as it may sound.  I mean, both supply and demand are well over 90 million bopd in the world now.  1.2 million bopd isn’t that much put into that context.

ARC Financial Chief Energy Economist Peter Tertzakian highlighted in his 2005 book–A Thousand Barrels a Second—that the world really was consuming 1,000 barrels a second (!) of oil, which translated into 86.4 million bopd.

Now The International Energy Agency (IEA–they’re based in Paris France) ) says demand has since increased to 92.5 million bpd of oil in 2014, while oil supply reached a record 93.6 million bopd.

And according to the most recent data both supply and demand for oil increased again in Q1 2015, with oil demand growing to 93.1 million bopd and supply expanding to 95.1 bopd. These statistics clearly outline a 2 million bopd oil surplus.

A surplus of oil is evident from the decline in prices.  But there is some interesting evidence that these excess supply statistics may be too pessimistic. Or as Mark Twain once observed, “Facts are stubborn things, but statistics are pliable.”

What if this 2 million barrel a day surplus does not in fact exist?

What if demand is actually greater than estimated and the world’s supply and demand of oil is actually much more in balance than these statistics indicate?  It would help explain the 50% increase of prices from the lows reached earlier this year.

With almost 100 million barrels a day being produced to fuel our planes, trains and automobiles (as well as into all sorts of manufactured goods and plastics) it is impossible to accurately track where all this oil is sloshing around.

How much oil is actually being illegally exported from Iran? How much is OPEC actually breaking their own quotas? How much is Russia or other oligarchs fudging official numbers for personal benefit.

And that is just on the supply side.  How do you even begin to track the demand of oil? “Quick honey, call the IEA, I just drove the kids to hockey!”

In two June 2015 reports, Marshall Adkins and his energy team at the US arm of securities firm Raymond James looked at these statistics and came to some very interesting–and bullish–implications for future oil prices.

For the IEA’s numbers to work and make sense, the global supply and demand must add up to changes in inventory. If supply is 2 million bopd greater than demand, then inventories should be going up by that same amount. But what happens when these numbers don’t balance out?

In fact, these numbers almost never add up.

And the IEA statisticians do what all great statisticians and accounts do, they create a “plug” line to balance out the difference. In the United States, the EIA does the same thing, and calls this the “miscellaneous to balance” (MTB), and is what makes the numbers balance.

And in the first quarter this plug number totaled 1.2 million bpd, or 60% of the 2 million bpd of oversupply estimated by the IEA. And to put this in perspective, this is equivalent to the UK’s daily oil usage.  So maybe, just maybe, our surplus isn’t as great as is being reported.

Over the past 15 years, the IEA’s MTB plug number has averaged NEGATIVE 100,000 barrels, compared to positive 700,000 barrels in 2014 and 1.2 million in the first quarter of this year. The most recent numbers are substantially different from historical averages, which leads us to suspect that some isn’t quite adding up.

And just like other economic data, the IEA’s data gets continually revised as more and better data comes in. In fact over the past 15 years, the IEA revised upward their annual demand estimates by an average of 700,000 bpd.

So given that the current MTB estimate is much greater than the historical average and that the MTB is typically revised by 700,000 bpd, there appears to be a very good likelihood that demand will be revised higher in coming quarters. 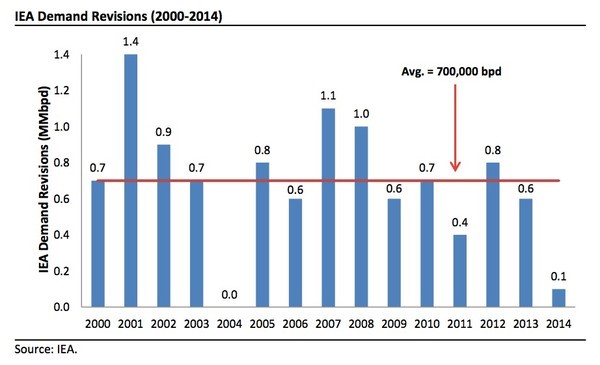 And in other ways their data seems curiously inaccurate. Yes Europe and Asia are having their challenges, but in 2014 the IEA reported that global oil demand only increased by only 700,000 bopd (or 0.75%). And this seems exceptionally low given that global GDP increased by over 3% in 2014 and that oil demand typically increases when prices drop as significantly as they did last year.

Barring any significant revisions to the supply side of the equation, it appears that demand could be revised from being oversupplied by 600,000 bopd to 300,000 bopd oversupplied in 2014.

And for 2015, the current 1.2 million bpd is expected to be revised downward to a much more reasonable 300,000 bpd of oversupply.

In the U.S., the EIA has also seen their plug number reverse course in 2015: Says Raymond James on June 29:

“…we think the overstated weekly U.S. oil supply is actually being captured by a recent major change in the EIA “plug” number…Since March, the EIA balancing plug has totally reversed, suggesting overstated U.S. oil supply during the second quarter of 2015. The weekly adjustment figure (or EIA plug) has undergone a shocking transformation over the past several months. Specifically, the adjustment in the weekly inventory report has plunged from a positive 362,000 bpd in 1Q15 down to a negative 113,000 bpd in June. So what happens if we assume that the “unaccounted-for oil” plug is really U.S. lower-48 supply?..” 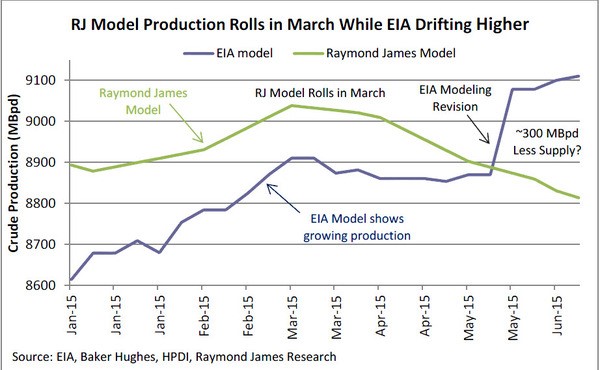 This would indicate the world’s oil market is much tighter than many investors now think.  Psychology is going completely the other way right now, so these data points will get ignored–until they don’t. 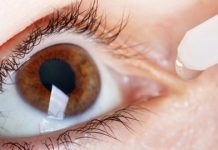 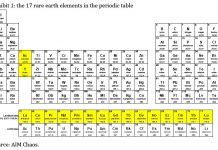