There is only ONE number in the oil price saga that’s important to investors. It’s the same number the Saudis are tracking.

That is: how much did US oil production increase in the last week.

That number is released every Wednesday morning at 10:30 EST in the weekly EIA (US Energy Information Administration) put out by the US government.

just scroll down to the bottom or click on the excel file.

The global oil price will have its biggest 30 minute move of the week right at 10:30 am right then—both the international Brent benchmark and the US domestic WTI (West Texas Intermediate) price.

Why is this number so important?

Because it’s very clear in Saudi communications they want to put a bridle on galloping US oil production.

(Notice I didn’t say OPEC. The Saudis don’t care a whit about other OPEC countries. Members like Nigeria, Algeria, Venezuela are either so corrupt or so unable to cut production that the Saudis ignore them—as they should.)

The Saudis are watching this US production number like a hawk—as they should.

The unbridled oil production growth in the US from the Shale Revolution has disrupted oil flows and prices like nothing else since the OPEC embargo in the early 1970s.

Everyone has seen this chart of US oil production:

That’s a very steep upward curve right now. US oil production is on a RAPID increase. Here’s the excel file from the weekly EIA report, and I added a third column and calculated the weekly change in production for the last few months: 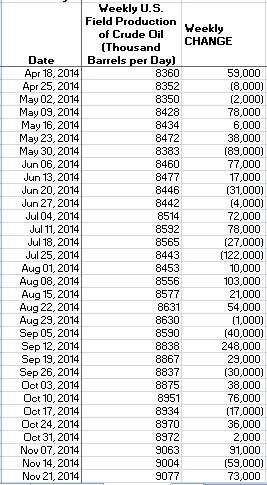 There have been a couple times that US production has dropped a couple weeks in a row this year.

For the Market to begin to think the oil price has bottomed, it has to see US production drop AT LEAST THREE weeks in a row.

Improvements in fracking are STILL increasing flow rates per metre drilled—five years after the Shale Revolution really took off.

This is increasing cash flows and reducing break-even costs for tight oil producers.

Exports of US refined products continue to hit new highs—now over 4 million barrels a day.

Personally, I don’t think the Saudis start to collect other OPEC members to talk about cutbacks until the price is low enough that American oil production growth slows down—a lot.

By the way, this number is always a true surprise to the Market.

Gas production can be estimated with pipeline flows (in fact US energy consultant Bentek out of Denver Colorado puts out a daily estimate of US natural gas production) but with the weekly Wednesday morning oil number—there is no way to “game” that number.

EDITORS NOTE–The lower Canadian dollar has shielded close to half the drop in the price of oil. So their cash flows could surprise the Market in early 2015. I have a new report which outlines my Top 3 Juniors that will the biggest and fastest inflows as oil finds a bottom. It’s where the easy money will be–and soon. Click Here to be positioned to profit.