Free cash flow in the North American energy sector is about to soar, and that trend should continue for the next 5-10 years—even with declining oil and gas prices—says US brokerage firm Raymond James (RJ).

For investors, it could (should?) mean higher multiples as energy producers turn into more sustainable cash flow machines.

The heart of RJ’s argument is that the massive overspending by producers on new land plays is almost over, and production costs have stabilized.  At the same time, oil and gas production per well is increasing–sometimes dramatically.

Stable costs and higher production. The result?  A new era of positive, free cash flow that should last several years. 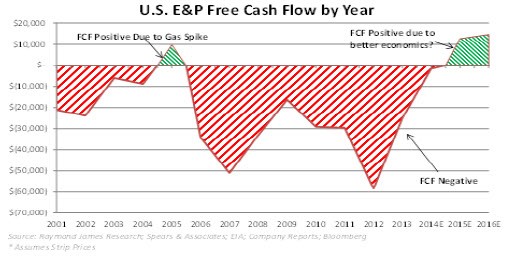 Some supporting evidence comes from a second research report–also issued on July 14—by the #2 Canadian brokerage firm, BMO Nesbitt Burns.  In a 26 page summary introduction report to their annual Global Cost Study for the energy sector, they showed costs for natural gas declining rapidly and even tight oil costs in the USA stabilizing.

Part of this overspend can be blamed on the incredible land race the industry had during that time.  Once the Shale Revolution started—wow! It opened up billions of barrels in untapped shale fields.

Companies scrambled to stake as much land as possible—leasing millions of acres of land. It was a new gold rush!

Land was bid up to $25,000 per acre in some instances, multiples of the original investment.

So that’s a huge part of the industry’s overspending now complete and out of the way.

E&Ps are now turning their attention to drilling their land, identifying sweet spots and improving their drilling efficiency (lowering their per unit costs).

And they’ve been very successful at that–thanks to horizontal drilling & fracking, the key technology behind the Shale Revolution.

Improving drilling efficiency means rising US production and falling costs per unit of production.  This chart from Raymond James shows just how much more efficient the drilling industry has become—we have seen a doubling in IP (Initial Production) rates the Bakken, a tripling in the Eagle Ford and an 8x increase in the Marcellus over the last few years: 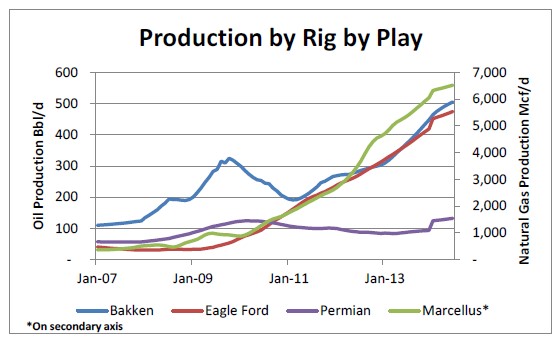 This rapid rise in production volumes eclipsed the slower rise in costs.

Rising production and falling costs per barrel means that the breakeven price for energy has also been trending lower.

That has been the most obvious in natural gas. The BMO report shows natural gas supply costs dropped below 4$/MCF in 2013 and is trending down to $5.10 on a three-year average basis. 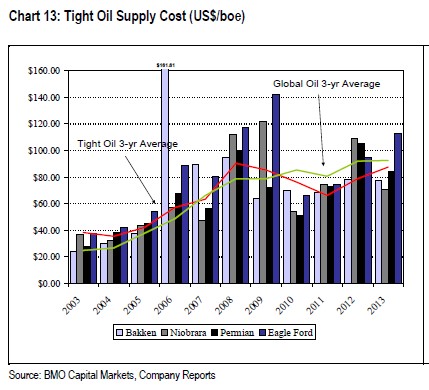 That growth has allowed US E&Ps to achieve supply costs below the global oil average in three of the last four years. 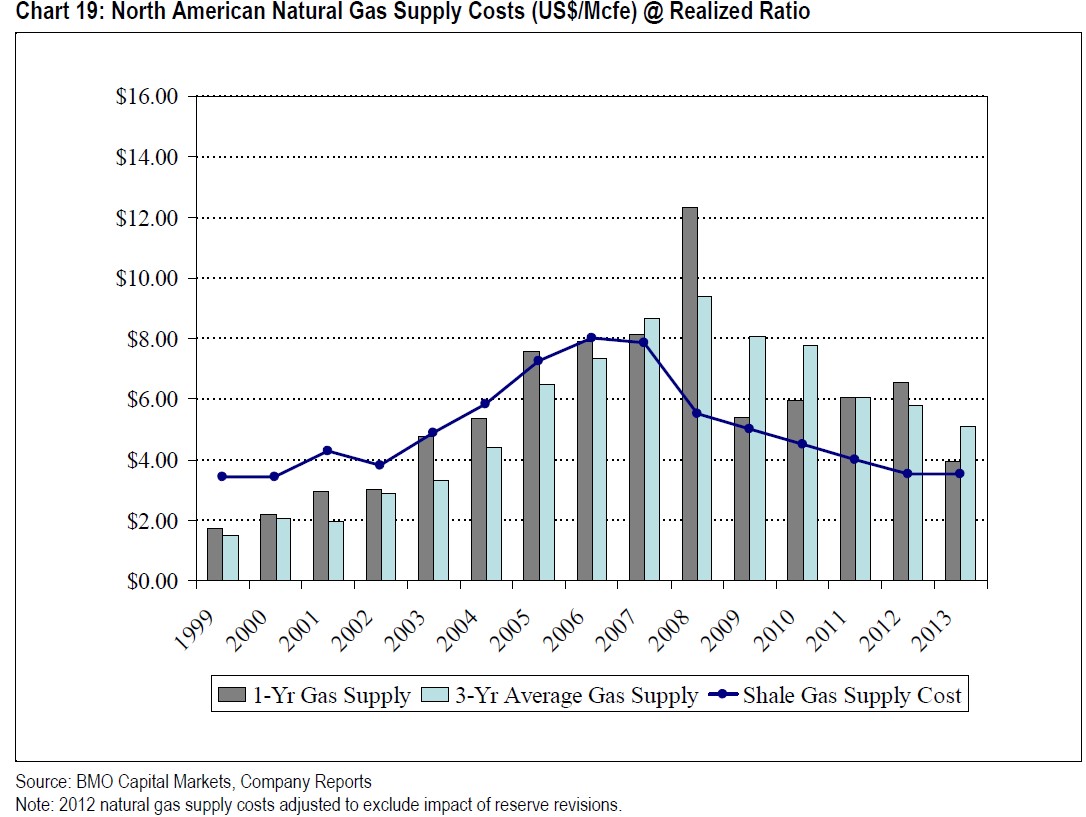 Raymond James says this a major paradigm shift for energy producers and investors. The industry should be a Free Cash Flow machine for the next 5-10 years, they say, even in the face of slightly declining oil and gas prices.

And since the industry can now deliver steady, solid returns and be less dependent on oil and gas prices, that more stable cash flow should result in higher multiples for energy stocks, they add.

RJ believes multiples for E&P companies can potentially rise from the mid-single digit range (5-7x for E&Ps, and 5-8x for service companies), to something approaching that of industrial companies (in the 8-10.5x range).  To be fair, the low-cost leaders in the industry have been hugging the upper end of that range for a couple years.

But on average, for both E&P and service stocks, this implies a 15-30% upside from current level if we assume a 1-2 turn improvement in multiples.

If they’re right—and some recent evidence from BMO Nesbitt Burns supports their idea—then the energy sector should give buoyant returns to investors in the coming years.