Home Natural Gas Ethanol vs. Natgas—the Summer 2014 Duel
How do you invest in the weather? When it comes to weather, what’s bad for natural gas is good for ethanol.  These two commodities are almost exactly opposite trades each summer.Hot weather–especially on the populated east coast–makes for lots of air conditioning demand in North America, which increases natural gas prices.A cool summer means low natural gas prices, but it means higher ethanol margins.  You see, cool summers make for a great growing season for corn—and this year looks like a record US crop.  The Market is now anticipating so much supply that pundits are now suggesting corn could drop to under $3/bushel this year.  Low corn prices and high gasoline prices make for high profits for ethanol producers.

Last week was the week the Market decided it was going to be a cool summer, and natural gas prices fell out of bed.  This week’s forecast is even colder: 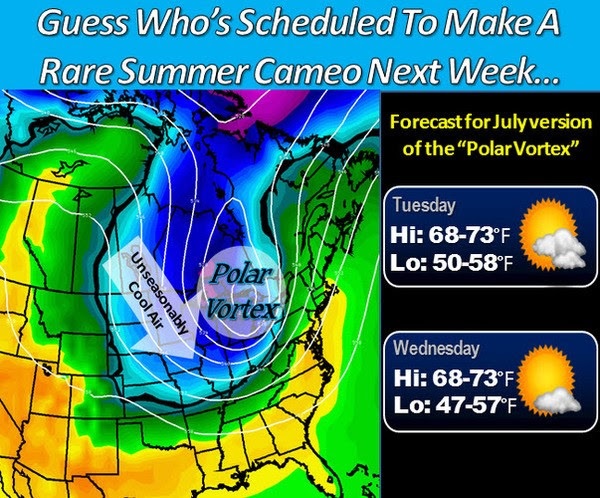 Source – http://bit.ly/globalcooling2014Eight weeks of natural gas injections above 100 billion cubic feet (bcf) plus last week’s number being only 3-5 bcf above expectations did it—combined with a very cool forecast for the Midwest US in the coming days.The Market is saying it now believes weekly natural gas storage injections in North America will get overall inventories to a high enough level by the time withdrawals start in late October or November–that it’s not worried.

The Market is also eyeing guesstimates by natgas industry experts Bentek and Genscape that production could jump by another 2-4 billion cubic feet per day (bcf/d) in 2015.  (The US now produces about 69 bcf/d.)

Natural gas price increases could now slide until Old Man Winter tells us how strong he is starting in November or December.  The only real question in my mind is…how shallow will the natural gas price dip be over the coming 4-5 months.

Now over to ethanol.  I expect retail gasoline prices to now drop with slightly lower oil prices, but the price of corn is likely to drop more, creating greater profit margins for ethanol producers through the summer.

As I said, the Market is expecting a record corn crop in 2014 in the US–mostly because of a very high yield (the amount of corn produced per acre).  As the chart below shows, corn yield have been trending up steadily for 50 years.  Because of the cool summer (corn yield start to take a hit over 86 degrees F), everyone is expecting the corn yield to be well above the trend line this year.

For those of you wanting to go down this rabbit hole on your own, sign up for the ethanol updates athttp://farmdocdaily.illinois.edu/ 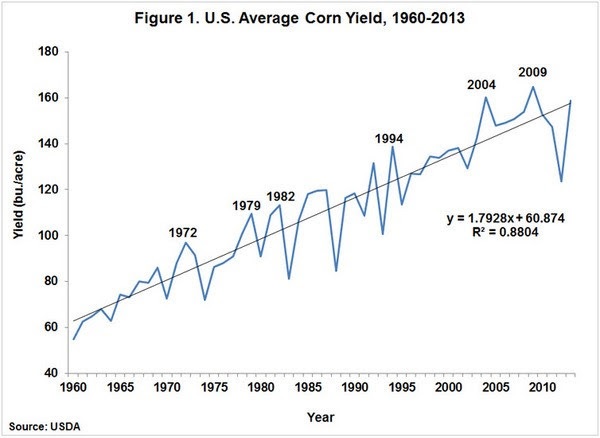 And….would you believe there is actually a statistical correlation between corn prices (and therefore yield) and the sunspot cycle?  I talked about this briefly in my Global Cooling trilogy.

I am not making this up.  Why wouldn’t solar activity be the dominant factor in global temperatures, which by definition makes it impact agriculture in a huge way?

The cost of production for corn is around $2.60 a bushel for the really good low cost producers.  Give them a 10% rate of return suggests that corn could go to $2.85/bu before it bottoms—by then a lot of higher cost producers could/would not sell their corn.

Corn just slipped under $4/bu on Friday, closing at 399.6 cents according to the NASDAQ website, and then dropped to $3.81 on Monday. 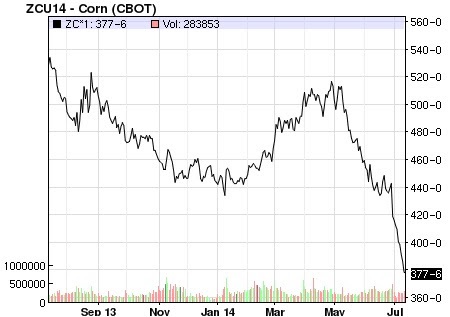 The global/macro picture for ethanol is strong, says US brokerage firm Credit Suisse.  In a July 11 report, they say global ethanol demand increased from 7.7 billion gallons in 2005 to 23 billion gallons in 2013, because of the Renewable Fuel Standard (RFS) in the US and also due to Brazil’s 20%-25% ethanol blending mandate.  They are projecting global use to rise to 32 billion gallons by 2022—only eight years away.  That’s positive.

BUT–the Big Risk for investors is domestic use of ethanol.  Ethanol in the US has now hit what is called the “Blend Wall”.  The gasoline industry must supply its product with 10% ethanol by law, and stats show the industry is there right now.  See this chart from a July 11 report by Credit Suisse on global ethanol demand: 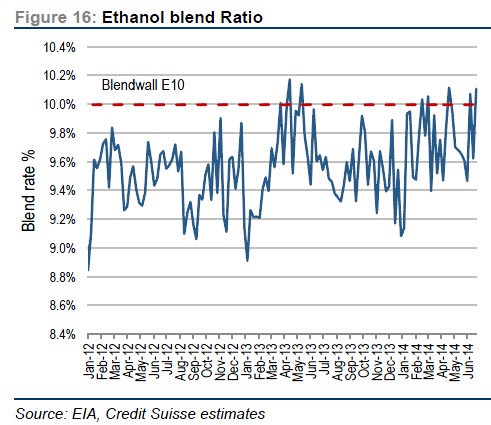 And you better believe the oil industry is not going to give up one extra barrel to ethanol if they can at all avoid it—it’s a bitter fight, with both sides lobbying Washington fiercely.The US is finding export markets worth about 1 billion gallons a year now, in addition to the 13 billion gallon domestic market.  The US is now producing more ethanol than it can consume domestically, so it MUST continue to find export markets or ethanol prices will drop—and when that happens, it goes fast.  Production is increasing to take advantage of this stronger profitability: 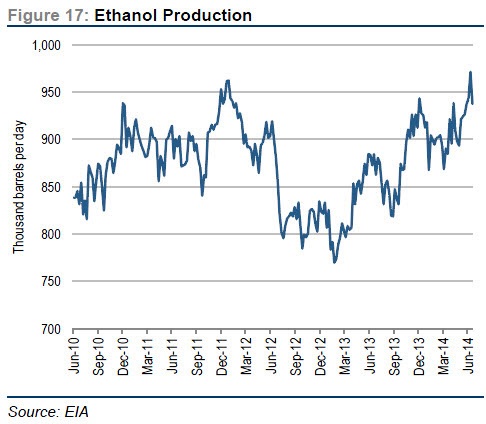 SUMMARY–Overall the cool summer is benefitting ethanol more than natural gas. Cool weather is manifesting into much lower corn prices, due to anticipation of a record crop. The spread between corn prices and gasoline prices is the profit margin for ethanol producers.  Right now that spread looks to be going higher, and likely staying for longer than previously expected. (Last year was a great crop too.)Gasoline prices likely are coming down a bit, but not as much as the corn price so margins should expand for ethanol producers. Ethanol continues to trade at a steep 30% discount to gasoline, so there is a lot of room for price increases for ethanol if summer driving miles increases (ethanol often closes the gap on gasoline pricing in summer and can sometimes even trade at a small premium to gasoline).So how do you invest in weather?  Well, from a weather perspective, what’s bad for natgas is good for ethanol.  (That’s why I say there is ALWAYS a bull market somewhere in energy!) This cool summer almost certainly means lower natgas prices, and so I think natgas stocks have peaked.  I still hold some of the more compelling growth stories in natgas, but I have reduced positions dramatically.

I’m still holding all my remaining ethanol stocks. Profit margins for ethanol producers should remain strong for another full year, barring the mother-of-all-heat-waves in August 2014.   The three main pure play ethanol stocks are

I am long PEIX and GPRE.