-In October 2013, the worst frost in more than 80 years hit Chile and damaged 50 million boxes of fruit for export—damages were over $1 billion.

These true-life stories are examples of global cooling—from all over the globe.

In Parts I and II of this series, I outlined the long term cycle of temperature changes on Earth, and how sunspots have had an eerily accurate correlation to earth’s temperatures for centuries.  Data strongly suggests that solar cycles have a definite impact on the world’s climate.

And right now, the best data on sunspots also suggest the world is about to enter a time of global cooling.  This doesn’t deny that mankind is influencing the world’s climate; sunspots’ very regular 11 year cycles can temporarily overwhelm a larger context of man-made (the scientific term is anthropogenic) influences.

But even that becomes somewhat suspect.  Evidence either uncovered or chronicled by a Boston-based research firm, Unit Economics, suggests that government and their scientists, together and independently, have been manipulating data (and caught red handed!).

The February 28, 2014 research paper by Unit Economics on global cooling goes into pages of detail on how some of the most important—and allegedly impartial—raw climate data has been regularly altered by private and public sector members of the scientific community.

And that’s really too bad, because people working on questions around global temperature have very few datasets to choose from.

One is the temperature anomaly dataset developed by NOAA (the US National Oceanic and Atmospheric Administration).   The other is from the Met Office Hadley Centre in collaboration with the Climatic Research Unit of the University of East Anglia in England, which is known as the HadCRUT3 dataset.

NOAA started developing its temperature database in the early 1990s. It was revised once in 1997, and then three times between mid-2011 and the end of 2012.

NOAA says the revisions dealt with new observations methods, corrected coding errors, and removed unnatural influences from things like changes in how instruments were stationed.

In short: lots of revisions, little specific explanation. Not surprisingly, people started accusing NOAA of data tampering (google NOAA data tampering)…and when Unit Economics compared the 2008 NOAA dataset with the most recent version, the changes looked like this: 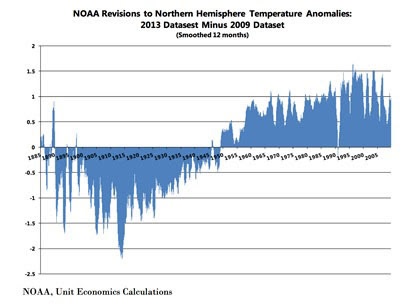 Overall, the man-made adjustments created an additional 2.48°F temperature change over the past 100 years – more than the 1.85°F of total warming the NOAA says has taken place since 1913!

Sadly for the general reliability of science, the HadCRUT3 dataset is no better.

This HadCRUT3 dataset is the basis of the Intergovernmental Panel on Climate Change (IPCC).  The IPCC ‘s job is to create a “clear scientific view on the current state of knowledge on climate change and its potential environmental and socio-economic impacts”.  That’s a mouthful.

The IPCC data did show increasing temperatures. Then, in October 2009, someone broke into a British office of the CRU, downloaded 160 MB of data and emails, and posted them online. The stolen CRU emails show prominent scientists discussing ‘adjusting’ data to reduce Medieval Warming Period and hiding very recent cooling trends, and making sure they all agree and aren’t stepping on each others’ toes. Many of these discussions ended with instructions to delete all records of the conversation.

Eventually a U.S. Senate inquiry was set up under chairmanship of Edward Wegman, professor of mathematics and statistics, and their report ruled that Penn State Professor and IPCC lead author Michael Mann’s work was ‘statistically invalid’.

But even all this couldn’t ‘adjust’ away the reality completely: the tampered HadCRUT3 data still shows global temperatures trending lower over the last 15 years. 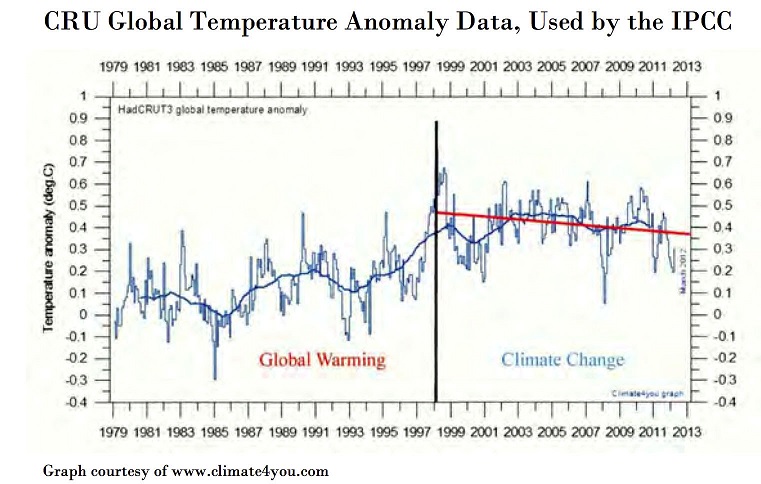 And there are some basic facts question the thesis that manmade CO2 is causing global warming.  As I said in Part I,  temperatures actually fell during the peak expansion of manmade greenhouse gas levels from 1940-1970.

Second, if CO2 emissions cause global warming the layer of the atmosphere 5 to 10 km above the earth where CO2 interacts with sunlight should be warming more quickly than the earth’s surface. In fact, temperatures at these levels have been unchanged since accurate balloon measurements became available 50 years ago.

Third, CO2 levels have cycled significantly over the known history, which stretches back 400,000 years. Our planet has survived CO2 levels roughly half of current concentrations and nearly twenty times higher! That certainly makes the commonly quoted claim that a CO2 concentration above 350 ppm leads inexorably to warmer temperatures seem pretty weak.

Fourth, atmospheric levels of CO2 increased from just under 300 ppm in 1900 to 397 ppm today, yet temperatures fell through much of that period and have increased by only 0.7°F overall – and that’s based on heavily manipulated datasets.

And there are some groups, such as the Carbon Modeling Consortium at Columbia University, that suggest human activities in United States may actually reduce atmospheric CO2 levels.  In an October 15 1998 issue of the Columbia University News, author Taro Takahashi, a senior research scientist wrote:

“We know that we who reside in the United States emit about 6.2 billion tons of carbon dioxide into the atmosphere each year. As an air mass travels from west to east, it should receive carbon dioxide and the East Coast concentration of CO2 should be higher than on the West Coast. But observervations tell us otherwise.

“The mean atmospheric CO2 concentration on the East Coast has been observed to be lower than that over the Pacific coast. This means that more CO2 is taken up by land ecosystems over the United States than is released by industrial activities.”

-Sea levels are DOWN by .2 cm (0.08 inches) since 2006.
-The polar bear population is up all across the Arctic—as much as 66% in the last 50 years and 13% in the last 5 years.
-water vapor in the air has been declining—more vapor, higher temperatures.  Less vapor, lower temperatures.

Again, the current global cooling could be taking place within a larger context of man-made climate change.  But even that becomes doubtful when the most basic, raw, original datasets are shown to be corrupted.  And there is enough seriousscientific peer review to question the IPCC climate reports—thanks go to Canadian Ross McKitrick from the University of Guelph and German scientist (and former Global Warming advocate) Professor Fritz Vahrenholt, who wrote Die Kalte Sonne (the Cold Sun) in January 2012.

There’s a great quote in Unit Economic’s report that puts this all into context:

“If one accepts the notion that the sun, which provides over 95% of the heat energy to the surface of the earth, has the potential to impact temperatures, it would be logical to incorporate observations and predictions of solar activity in climate models and forecasts – something most meteorologists and virtually all global warming enthusiasts fail to take into account when modeling earth’s climate. We believe this is because solar cycles explain climate cycles on earth too well, leaving too little room for CO2 to influence their models.” Weiss and Naleski, Unit Economics’ 2014 Report on Global Cooling.

The Real Inconvenient Truth is that there is enough flawed data to question just how serious Global Warming is, or if it’s real at all in the short to medium term. Is the hysteria warranted?  Keep your mind open, despite the intense politically correct forces out there who make that a crime on this issue.