Below is Part II of my full OGIB Subscriber Report on Pacific Ethanol (PEIX-NASD).  Part 1 was published Saturday, which you can read HERE.  My goal is to help Free Alert Readers understand the level of research I put into my full reports.  This report appears exactly as it did on December 3; it has not been updated so you can get my thinking at the time.  I’m still longPEIX (though I have sold out my cost now).  Corn prices have been dropping hard recently as US crop estimates this year could produce a record yield—170 bushels per acre.  That’s very bullish for ethanol. 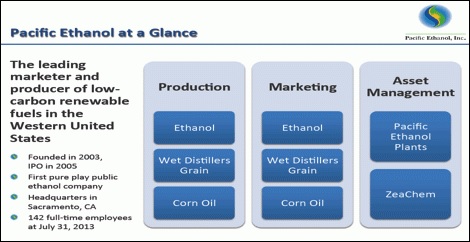 Pacific Ethanol (PEIX) is the largest producer of ethanol in the Western U.S.   The company operates four ethanol production facilities; three are now active. The fourth should be re-activated in spring 2014.

The plants are located in California, Oregon and Idaho and have a combined production capacity of 200 million gallons per year.  The three operating plants have 160 million gallons, and they’re running at 95% capacity (because ethanol is so profitable right now!).

The Madera plant is likely to be restarted at some point in 2014.

PEIX management not only produce their own ethanol, they market ethanol for two other California producers—giving them a near monopoly on the product on the US west coast. They have a definite competitive edge there (They were actually an ethanol marketer first, and producer second).

Crush spreads, or gross profit margins, are roughly the same in the Pacific region as the Midwest, says CEO Neil Koehler.  They pay about 35 cents a gallon equivalent more for corn (rail costs from the corn belt in the US Midwest) but they get only about 21 cents a gallon more for ethanol than in the Midwest.  The same theory does happen for the secondary products of distillers grains—the premium pricing they get in the western states makes up for the transportation costs—so PEIX is essentially able to pass on higher transport costs directly to their customers.

While PEIX operates all four plants under a management contract, it owns only 85% of them.  Here’s why:

As I explained in the GPRE company report earlier this year, the United States ethanol industry in recent years has gone through a boom and then a bust, and is now booming again.

The bust was created as the industry built up too much production capacity—then corn prices soared in 2008/2009.   An oversupply of ethanol matched with a sharp increase in production (corn) costs was a sure recipe for trouble.

Pacific Ethanol was a victim of this bust—it was forced to declare bankruptcy in its subsidiary units (not the public company itself; it had non-recourse debt with its subs) with the company’s bondholders taking ownership of the four plants in May 2009.

Post-bankruptcy, PEIX the pubco has slowly repurchased an equity interest in the subsidiary that contains its four plants from its bondholders at different times.

But still bankruptcy is not a good thing for existing shareholders.  But in buying back 85% of all those plants, PEIXonly paid $0.32 per gallon of annual production capacity. The “new” estimated replacement cost of those plants today is $2.00 per gallon—so they negotiated a big discount. (But that’s only good news for new shareholders like me.)

PEIX shows in its corporate presentation (slide below) the prices it has paid to regain this ownership interest:

And the pain doesn’t end there.  CEO Neil Koehler and his team had to do SEVERAL dilutive financings to get those plant interests back—in both debt and equity.   There is now $119 million gross debt.  There are a lot of warrants at $7.78—there are some cheaper but the big tranche is $7.78—but that’s more than a double from my cost base!  I can sell out my cost at $7.77!

After raising all that equity, PEIX management—and it’s still the same team—had to roll the stock back—a reverse split—1:15 to continue to trade on the NASDAQ. OUCH!   Look at this stock chart below:

So this team has A LOT to prove to the Market.  That is almost certainly why there are ZERO sell side analysts covering this stock right now.

This summer PEIX was forced to address some problems with its balance sheet.

With $98 million of debt maturing in June 2013 PEIX was working against the clock.  In a complicated series of transactions the company was able to extend the duration of its debt through 2016 as well as reduce total debt outstanding by $13.5 million.

As part of this cleanup 13.4 million warrants with an average strike price of $7.78 per share were issued.  I have a list of all the warrants and strike prices here:

Shareholders were kept white-knuckled during this time as $4.1 million of debt that expired on June 25th was not repurchased until just days in advance of that date.   It’s tough playing chicken with your debtors…

It was a busy and likely stressful summer for PEIX management.

With all of its restructuring PEIX now has $120 million of long-term debt, $9 million of cash and about $14 million of unused capacity on its credit line.

That is the recent history.

One of my accountant friends told me that looking at financial statements is like looking in the rearview mirror.

Financial statements tell you about a company’s past, not where it is going.

When you look at the financial statements of PEIX there isn’t a whole lot to like.  Few profitable quarters, recent troubles with debt and a reverse share split.

But it isn’t the past that I’m interested in, it is the future.

I think Pacific Ethanol’s income statement is going to look a lot different in the next several quarters than it has in the recent past.

That change is due the huge ethanol margins that are available now for PEIX which is fully unhedged with plunging corn prices.

PEIX is going to make some hay in the next several quarters.

On top of the wide margins this company is going to enjoy there will also likely be a bump in revenue (and profits) from its currently idle Madera plant.

When I spoke with CEO Neil Koehler he indicated that for the $7 million it would cost to get the plant up and running PEIX could get $10 million in EBITA per year (and that’s assuming tighter margins than today).

I would expect this plant to come back on production for the spring 2014 driving season—which usually drives up gasoline prices, and profit margins for refineries. I think if they could afford to hedge in current margins of 55-60 cents a gallon they would restart is right away.  So the spring 2014 startup will still depend on profit margins at the time, but a couple of quarters of income from the current wide margins would add some cash to cover the startup costs.

Investors today either have never heard of PEIX (there is no sell-side coverage) or they hate it (suffered through the bankruptcy).

That is why few people have picked up on the fact that the with strong ethanol margins (not even as strong as today) this company could be trading at 2-3x 2014 earnings.

Talking with the one other newsletter writer who covers the story (institutional level; who did a very detailed financial model of PEIX) thinks that earnings could be as high as $1.16 per quarter.  That assumes ethanol margins of $0.50 per gallon—which is actually lower than the $0.65 per gallon where they currently are. And spot market margins have been as high as 80 cents/gallon in late 2013.

Remember, that’s forward looking pro-forma math—we have no idea what WILL happen.  But GPRE is currently trading at more than 12X earnings, so you think PEIX could get some big multiple expansion if it strings together a few good quarters.

At these types of multiples it won’t take long for investors doing stock screens to pick up on a company trading at such a low multiple and revalue the company share price higher.

Earnings per share numbers would further increase if the Madera plant were to come back on production.

Another way to think about the valuation of PEIX is from the point of view of the replacement cost of its assets.

At a replacement cost of $2 per gallon that would suggest the plants are worth $340 million to PEIX.  Subtract the $129 million of debt outstanding and the company has an asset value of $211 million.

That makes the company look cheap on a per share basis both relative to likely earnings and the replacement cost of its assets.

WHAT THE ANALYSTS SAY

There are no analysts covering this story.  None. 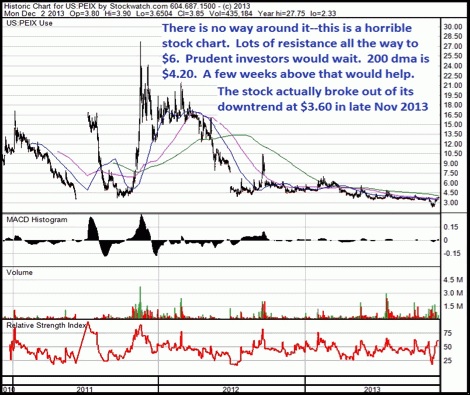 This is a turnaround story that is just starting to turn.

The bad news is behind this company and the hard work is done.  I’ve talked to CEO Neil Koehler.  He understands Job 1 is post a couple of solid quarters, pay down some debt and then the Market will see how cheap this stock is relative to earnings.   For the first time in 18-24 months he won’t be fighting liquidity issues; he and his team can now show the Market how well they can run the business.

There aren’t many opportunities to buy stocks at potentially less than 1X next year’s earnings.  This is one of them.  All Neil and his team have to do is not screw up and I think the stock gets re-rated to a 3-5x PE—which is a 300-500% gain for me!  At least, that’s the theory ;-)

There is certainly still risk involved as this company carries debt, is unhedged and management has yet to prove themselves to the Market.

But there is a chance to make three times my money here—from both better profitability and multiple expansion—without the company doing anything heroic.