Home Oil and Gas Financial The U.S. Dollar’s Impact on the Oil Price

Many investors study supply and demand statistics to figure out where they think the oil price is going.

But by far, the biggest factor that determines the oil price is the US dollar, says Donald Dony, who pens The Technical Speculator investment newsletter.

“The US dollar is absolutely pivotal for commodity prices,” he says.  To pros in the investment game, that is a truism; obvious.  But most investors underestimate the background impact the U.S. greenback has on oil prices.

And Dony expects the US dollar to keep grinding higher.

“Our analysis  on the USD is looking bullish on the longer term basis—86-87 or even up to 90 cents on USD index.  The U.S. economy continues to improve thanks to the ongoing commitment of the Fed to its stimulus program.  As long as the Dollar keeps rising, we will definitely see a negative impact on oil prices.  The dollar needs to fall through $0.82 before a trend reversal occurs.  If it does, commodities should jump.” 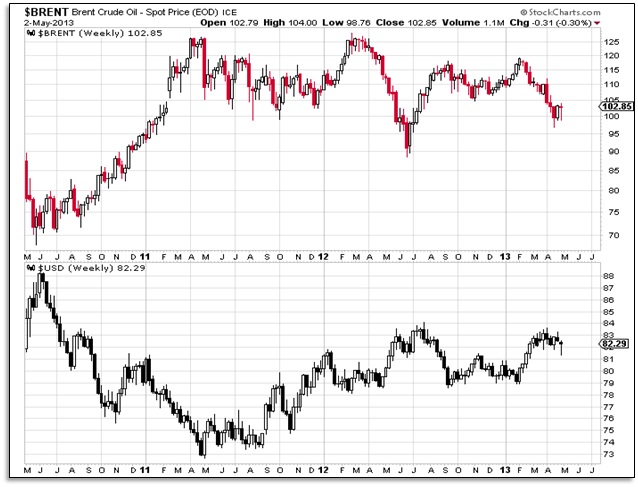 He adds that the US dollar and the S&P 500 index appear to be back to their traditional—and positive—connection, that’s not good for commodities.

“I see another six more months of higher S&P.  All tops are big distribution pattern. Generally speaking, what happens is that for 6-8 months the market can’t move higher—but it doesn’t drop, either.

“If that’s the case, we have nothing like that in the S&P right now.  That alone gives us a bit of a picture. If the S&P stays at 1600 all through the summer, we may not see a downturn until the end of the year.  These distributions last for months—often 6 months or more, where the market tries to go higher but there just aren’t enough buyers.”

Dony also says the oil price also follows the stock market… but not like it did years ago.  He says that now, unlike 30 years ago, we have a real world economy; it’s not just the S&P based in the USA.  Oil is following what global markets are doing, not just the S&P—and he says global markets not really going anywhere; they’re up marginally but not strong. 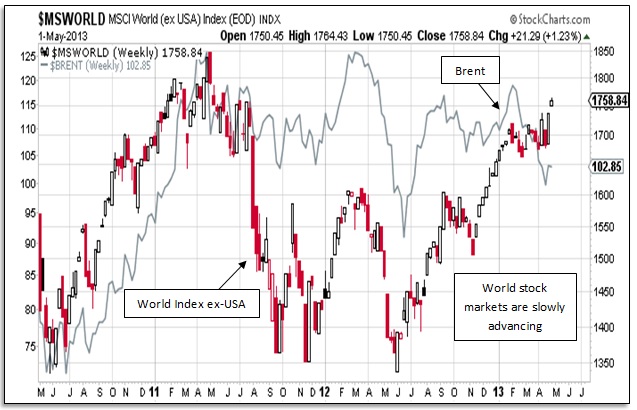 Dony expects the world’s stock markets to continue advancing slowly as long as the U.S. stimulus program is in place.

“The charts show there is a rhythm to GDP (Gross Domestic Product) over the last 30-40 years that gives us a low every five years.  If that’s the case, we’ll likely see the next low sometime in 2014.  I don’t know how deep or how long the next correction will be.  And most of the world’s GDP has already declined for the last two years—even three. I expect another low next year.”

So what are a couple of his favourite stock charts in the Canadian oilpatch?

Enerplus—ERF-TSX/NYSE—in November 2012 it took a Mexican cliff dive, and has now been forming a wonderful base, and $13.50 was a big resistance level.  Then it broke through, and came back to $13.00-$13.50 which is now support—good time to be buying.

Freehold Royalties Ltd.—FRU-TSX; FRHLF-PINK—This is the pattern level I look for.  It has resistance level of a year or more.  When it breaks through it means something special, that’s a really strong sign and you see a fairly significant move.  The technical target is $31.50

PenGrowth Energy Corp—PGF-TSX; PGH-NYSE—it’s almost the same as ERF; it’s making a change in direction.  It pops up in March, good support at 4.80.  I like the ERF chart more but PGF shows a lot of promise. 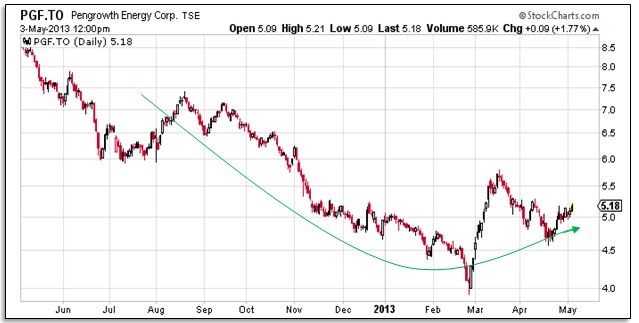 Dony says the US dollar has ALWAYS been the driving force for commodity prices.  He says that in the 1960s-70s, the U.S. dollar was relatively weak, and commodity prices took off.  In the 1980s & 1990s the US dollar moved up in a gradual strengthening phase, and commodities went nowhere for 20 years.  When the dollar crested in 2002 because of crushing national debt, commodities roared.  Now the greenback has bottomed since 2008.  In fact, over the last two years, the Big dollar has been rising.

“It’s a simplification but it’s a fact—the dollar is way more important than all the supply and demand factors.  Copper should be taking off to the moon.  China is stockpiling the stuff and controls 50% of the world’s supply.  But copper is falling like a stone because the US dollar is up.

“It throws a blanket on the supply and demand stuff—except for natural gas, you have to look at the US dollar to get a real grip on commodity prices.”

Ah yes, natural gas—the best performing commodity over the last 12 months. In my next story, Dony gives us thoughts on where the charts are telling him the price is headed, and what some of his favourite stock charts are in that sector.

Neither Donald Dony nor Keith Schaefer own any stock mentioned in this article.