Home Stock Market Sell in May and Go Away?

2011 was a textbook year for the old saying “Sell in May and Go Away.”  But market action in 2012 is saying strongly that would be the wrong tack for investors, says Donald Dony, author of the monthly Technical Speculator newsletter.

“This year the market has been reacting on any kind of pullback with great strength,” he said in a phone interview from his Victoria, B.C. home. 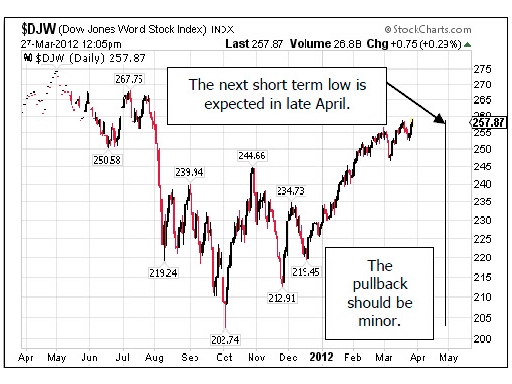 “In early March 2012 I thought we were in for a big one (correction), but then the world markets came in and whoosh, it stopped.  That seems to be a different behaviour than what we saw in last couple of years.  There were real pullbacks in 2010 and 2011.”

Dony qualifies that everything is based on probabilities, but they’re pointing in that direction.  Other factors making him bullish past May are the large amount of money he sees sitting on sidelines, and numbers out of the US showing the economy is improving—rising GDP, falling unemployment.

In fact, Dony says 2012 could be the biggest year for stocks since 2007—he’s telling his clients to stay fully invested right now, even through this April downturn, which he saw coming.

The second point is powerful.  “This appears to be the last leg of this bull market.  The current bull market will be 1400 days at end of this calendar year—and usually in the last leg there is a lot more strength; that’s typical.”

Dony says the average bull market since 1940 has lasted roughly 1600 days, or 4.38 years, and is then followed by a bear market of some kind.  He is calling for late 2012 to be the end of the current bull market in both stocks and commodities. 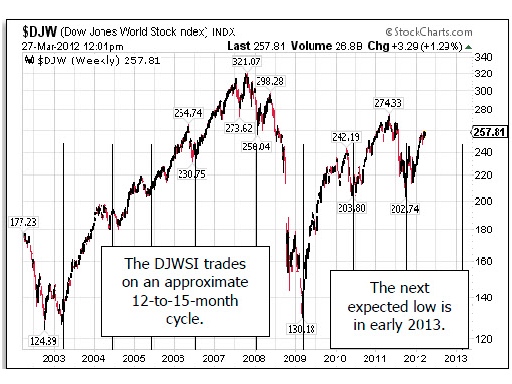 Donald and I talk every week about junior oil stocks.  He warned me his theory is aimed mostly at the S&P 500, not junior oil stocks–even though his call for Brent oil late this year is $148/barrel.  His Q1 target of $126/barrel was perfect.

“It’s not as relevant for commodity stocks, though things move together as a degree.  If the Dow goes up, then Canada will follow suit.  Maybe not as much, but we won’t go down to 11,000.  Our markets have not really rallied, so we’re a better value.  But a rising tide is not lifting all boats in the energy sector. In sectors like energy, it’s all about stock selections—rifle shooting.”

The simple reason for this is that 80% of all stocks in the US are trading above their 200 day moving average (dma), whereas in Canada, only 46% are, and it’s been that way for a couple of months.  This means it’s a stronger bull market in the US; there is more support for stocks.

“That’s why we’re seeing a lot more volatility in the Canadian indexes.  We’re near that 50% level.  When markets start to correct we’re going to see a lot more pullback.”  He estimates the TSX Composite Index will bottom out this correction just below 11,500, which is a 10% retreat, whereas he’s forecasting the S&P to only drop 5-6% to the 1375 range.

To conclude, Dony is anticipating a good year for stocks—which is hard to believe in this April swoon. As long as this April’s low is above the December low, his theory is intact.

“Right now it doesn’t look like we’re going to have anything close to the January low. Are we going to drop 700 points on the Dow in next few weeks? I highly doubt it. In that perspective, we still have higher highs and higher lows, though they may not be at same percentage incline.

“In fact I hope it isn’t—if it is, then there’s more of a chance of it (the bull market this year) blowing right up.”

P.S.  I am a paying subscriber to Dony’s service, and at $120 a year it’s the second best newsletter value out there ;-). 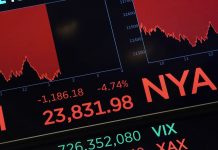