Editor’s Note:  Everyone, it seems, is talking about the Keystone pipeline. Recently I wrote a story on a mostly unexplored topic in the U.S gas price debate – a problem that could soon affect oil refineries and the price consumers pay for gas on America’s east and west coasts. You see, drivers on both coasts – but especially the heavily populated east coast – are increasingly vulnerable to sharp increase in gas prices, as I explain below. (I wrote this story for BusinessInsider.com – one of the top business sites in the world. A link to the full article follows my excerpt below.)

In the debate over rising gas prices, one largely overlooked issue is the lack of US oil pipeline distribution to the East Coast, where refineries that must import higher priced Brent crude are being shut down.

America has more than enough cheap domestic oil, thanks to the North Dakota Bakken and the Canadian oilsands. And it doesn’t face a refinery crisis in terms of capacity – after all, even though the US hasn’t built a new refinery since 1976, oil refining has actually increased by 2 million bopd to 17.7 million bopd since 1985 (and US refinery demand has been steady at 14.8 million bopd since 2005).

Instead, the real problem is that coastal refineries can’t source the cheaper North American crude. The Brent oil price fluctuates widely with geopolitical news. A stable, nationwide refinery system—well connected with pipelines—is one area where the US can help control price surges in local markets. Few things affect local gas prices like the shutting down of an oil refinery – and right now, the East Coast is at risk of losing three. 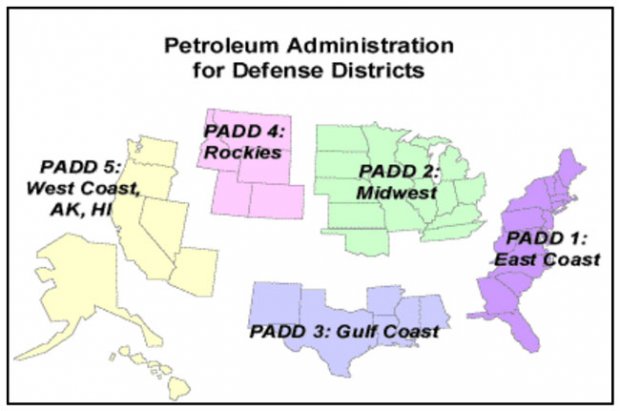 Politicians talk to the potential of the Keystone XL to bring cheaper Canadian crude to the Gulf Coast. But this north-south pipeline isn’t as badly needed as west-east lines that can carry cheaper American and Canadian crude from Cushing, Oklahoma to money-losing refineries on the East Coast. Today, the country’s five oil districts are not well connected by pipeline–each district must rely on its own crude supplies. 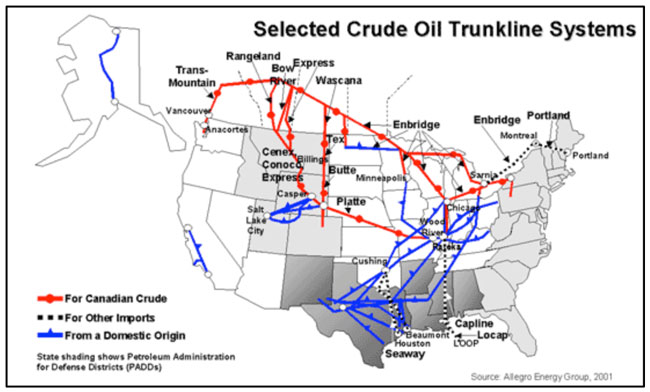 Only the Midwest and Gulf Coast refineries have access to all the new cheap crude coming out of the US shale plays and the Canadian oilsands. As a result, consumers in these regions enjoy WTI pricing – some of the lowest retail gasoline prices in the world.

Only the Midwest and Gulf Coast refineries have access to all the new cheap crude coming out of the US shale plays and the Canadian oilsands. As a result, consumers in these regions enjoy WTI pricing – some of the lowest retail gasoline prices in the world. With no pipelines from the heartland, refineries on the east and west coasts are forced to use imported crude based on Brent pricing—which is $20/bbl more than WTI, $40/bbl more than Canadian light oil, and $50/bbl more than the huge new supply of Canadian oilsands crude.

These coastal refineries are having to buy crude at higher international prices and then sell the finished product into a US market that enjoys some of, if not the, lowest retail gasoline prices in the developed world. This leads to serious financial losses for the refineries and, as a result, more energy companies are looking to get out of the refinery business. Right now there are three refineries up for sale on the East Coast – two by Sunoco and one by ConocoPhillips – and more could be coming. Altogether, these three plants have a refining capacity of over 800,000 bopd. If these shut down, the entire eastern seaboard, but especially the US Northeast, could see a supply crisis and a record jump in gas prices this summer just as the driving season hits top gear.

But this would not be happening if these refineries – and the others along the east and west coasts of the US – could access all the cheap light oil being produced in the North Dakota Bakken and other shale plays in the US. Or the Canadian crude that’s even cheaper. That means more pipelines – east-west pipelines, not north-south. That cheap domestic crude has to flow to the coasts and help make those refineries profitable again. But to be clear, all that cheap crude getting to coastal refineries – east or west – won’t lower gasoline prices, but it would likely prevent these refinery closures, and the massive price hikes that could happen along with it.

A recent study conducted by Bentek Energy (Crude Awakening: Shale Boom Hits Oil) found that North American crude production will increase 36 percent, or 3.1 million bopd, by 2016 due to shale oil plays and the Canadian oilsands. The firm notes, however, that this positive outlook on supply is undermined by the fact that there is inadequate transportation capacity to get that oil to refineries. It’s tracking the development schedules of 75 pipeline expansions, 25 rail expansions and 7 refinery expansions—though the near term expansions are mostly in the Gulf Coast which already holds half the US refining capacity. That’s little comfort to the drivers on the east coast.