The leading Canadian junior oil companies are doing whatever they can to create value for their shareholders.

Three of the top junior oil companies in Canada are turning away from high growth and into dividend plays this morning. These are all well-respected, leading junior management teams. One was no surprise, and one was a big surprise.

Whitecap (WCP-TSX) announced on Tuesday night—but management had been broadcasting their intent to the market for several months. This 15,000 bopd oil producer will yield 6.8% based on Tuesday’s close and grow production by 3-5% per share per year. They are 49% hedged at $100/bbl and have net debt of $335 million on a $450 million debt line.

Investors have to wonder—if the companies considered to be the best producers are having a hard time creating shareholder value to the point they feel the need to change, what does that say for everyone else in the sector?

And is this new business model sustainable? Is size, income and slower growth the answer for these companies and their shareholders? It hasn’t done much for dividend payers like Enerplus (ERF-TSX), Bonavista (BNP-TSX) or Pennwest (PWT-TSX).

With uncanny timing, Canadian brokerage firm National Bank (who have the best and humorous daily energy letter in the country) issued a small report yesterday outlining what they think will work for junior growth companies turning to an income model. They’re a little self-evident but here it is: 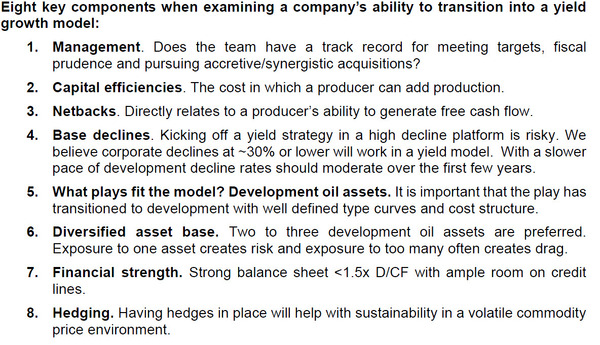 Any failure in any one of the 8 components could cause dividend cuts… which are painful.

This move does have some risk here—growth via acquisition is now their mantra. These companies need the institutions to support their stock and give it a premium valuation over other juniors—or else they can’t buy anything accretively. They still have to show great capital efficiency—meaning they have to bring a lot of oil out of the ground real cheap—cheaper than the next guy.

The market doesn’t pay for just size or growth; it pays for accretive growth.

Personally, I don’t see a sub 5% yield on a junior stock with a sustainability ratio near 100% (capex + dividends / cash flow). There is still a treadmill of production—fast declining wells—they have to deal with, and now they have a big chunk of their cash flow going out the door every month. Cost discipline is key

The results of this trend so far are mixed—Twin Butte (TBE-TSX) has enjoyed a nice chart since it transformed into a dividend payer last year—but Renegade Petroleum (RPL-TSX) has been treading water in its share price since it announced it was turning to income.

Both new income companies (WCP and PRY) have a large drilling inventory—years—and upcoming potential from waterfloods where costs are only $10/barrel vs. $35-$45 for primary production. But they both have high payout ratios, which will make them vulnerable to commodity price swings. And again, they both have very highly respected management teams.

Here’s my quick take on these two new companies:

-cheap wells give them flexibility if commodity prices turn down

-still a high sustainability ratio (arguably best in the group)

-not much production hedged yet

Stepping back, the junior sector has been adapting to several changes in the last 12 years—both geological and business.
The end of income trusts—no more easy exit strategy/buyouts
The shale revolution
Super low natural gas prices. Juniors are still in a “hangover phase” from when the Canadian income trust sector was raging in the last decade. (American readers: income trusts=MLPs, roughly speaking.)
Management teams didn’t have to build companies anymore, they only had to build “plays”—one area of decent production growth and suddenly they could get bought out much sooner, and for a lot more money, than they ever could before.

The income trusts traded at a premium to the market in a low yield environment. Then a financial genius came up with the idea of paying monthly dividends, not quarterly, and valuations really ramped up. Income trusts could buy anything and it was accretive.

Before the income trust game, there were intermediate producers in Canada—those between 10,000-30,000 bopd. They either turned into trusts or were gobbled up by one.

Junior teams came to have a much shorter time horizon in their public-company-building visions.

As the income trust game ended over the last few years the shale game kicked in—especially up until April 2010. As investors realized the low-risk development potential of tight oil plays after discovery, there was a series of buyouts by companies like Crescent Point (CPG-TSX) and Petrobakken (PBN-TSX).

But the change was that these plays are incredibly expensive, with wells costing $3-$10 million. A lot of money needed to be raised—and shares printed—to pay for the acquisition and development of these new tight oil plays like the Cardium, Bakken, Slave Point and Beaverhill Lake.

And then after the market thought Petrobakken overpaid for three Cardium juniors, the M&A game slowed down a lot.

The end result after billions thrown at tight oil is that only a few companies have enjoyed strong per share growth in production and cash flow.

And even fewer companies are getting rewarded for it. Charts like DeeThree (DTX-TSX), my #1 junior producer pick for 2012, are very rare.

Now, on top of all that, the market has started to factor in lower oil prices next year for both American and especially Canadian producers. The American benchmark WTI price is $23/barrel below Brent pricing in England. Canadian, Bakken and now Texas oil prices are $10-$20 a barrel below WTI—and with clogged pipelines and refinery shutdowns, that could play out throughout 2013. (Canadian heavy oil is almost exactly half the price of Brent today.)

What we’ve seen in the markets lately is the generalist institutional money—especially in the US but also Canada—leave the junior oil sector. Growth and good management is not getting rewarded.

So maybe income and good management will. Is this a sustainable business model now? Other dividend payers like Petrobakken, Pennwest, Enerplus, etc. are down in share price this year. Time will tell.

But I think it’s a major turning point for the entire sector.