Ithaca Energy Stock: When Will Production Growth Get Priced In?

When will Ithaca’s production growth start to get priced into its stock?

This junior North Sea oil producer is set to double production to 10,000 bopd late 2011, when its Athena project (Ithaca 22%, and operator) will come onstream.

I would expect some speculative premium to start developing in the stock in advance, as the technical and financial risk is – IMHO – gone, but CEO Iain McKendrick says The Street is telling him differently.

“Ithaca is a small company at $400 million market cap putting a large field into production as operator.  We did do the same at the Jacky field but it was smaller in scale.  So The Street may wait until first oil–’seeing is believing’” — he told me in a recent interview.

Kevin Shaw is a former sell side analyst who covered Ithaca.  He says “Ithaca, in my opinion, is as low risk as you can get in the offshore space,” but he understands market sentiment:

“Production performance–post start-up of a new field– can either surprise to the upside or underperform.  New, high quality conventional reservoirs require real engineering and reservoir / production optimization over time.”

Few junior oil stocks have generated more analyst and media commentary this year than Ithaca Energy (IAE-TSX).  I have owned the stock for a year, with the reasoning that the company is unique in the junior oilpatch in that it has discovered enough oil and gas to more than quintuple production in the next two years to 24,000 bopd, and has raised all the money to do it. It doesn’t need to finance.

History says that growth profile and cash position should make for a premium valuation—certainly on a domestic, (North American) onshore asset it would.  Yet Ithaca is, by estimates from Macquarie Capital, trading at 2x current annualized cash flow (once you subtract $120 million cash) and 1.5x their 2012 estimated cash flow of $330 million.   The latest BMO Nesbitt Burns weekly “comp sheet” shows the junior international producers trading at a median of 3.7x 2012 estimated cash flow.

If Ithaca could ever bridge THAT valuation gap, it would be a huge win for shareholders. So far, it has been elusive.

Here is a chart from a recent Macquarie report showing how cheap Ithaca is compared to its peer group, based on cash flow multiple. 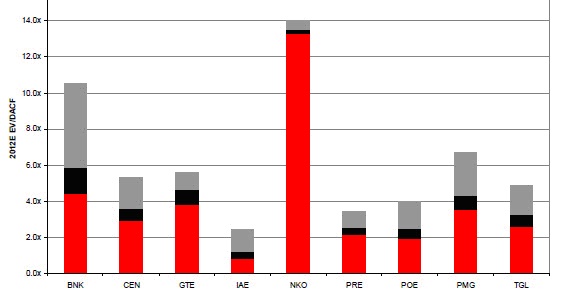 I’m also guessing that The Street is looking at production numbers, which were down from 4,552 bopd in H1 2010 to 1,876 bopd for H1 2011 – almost exclusively due to downtime at Ithaca’s Jacky field, where the ESPs (Electric Submersible Pumps; underwater pumps) had to be replaced.   This caused Ithaca to have a rare quarterly loss in its most recent financial statements.  And management did miss on their last Jacky well when they were certain they were going to hit.

Despite the fact that Jacky is now back onstream at even better rates than before, it brought to mind the risk that problems can happen offshore and they’re time consuming to fix.  In this market environment, investors are now looking for things that can go wrong with companies and stocks, not with what’s right.

I even had one analyst warn me that a low valuation won’t save the stock in a market downturn.  He said the high capital cost projects run by juniors will always be perceived as high risk ventures, despite the project being almost ready to come onstream and all funding in place.  In other words, the stock could get even cheaper if the oil price goes lower.

1.   The Boat – the Floating Storage and Offloading Vessel (FPSO) that is now under conversion in Dubai, and when complete in October will spend 15 days at sea getting to the North Sea.  It could theoretically sink (I guess).  And McKendrick says getting 650 men working day and night to make sure all the pieces work together there (including putting on 300 miles of cabling) is a logistical challenge.

2.   Weather—North Sea starts to get rough in the fall through the winter.

3.   Despite much testing, the wells at Athena might not perform as expected.  Nobody really expects that to happen, but it’s a possibility.

“With regard to reservoir risk, our tests have all had the same consistency.  We have already done production tests without ESPs (Electric Submersible Pumps; sub-sea pump jacks) on three of the four wells.  I feel 100% we will be getting up to our full 22,000 boe initial rate.”

He says that when Athena begins production, “Each well will start off in sequence. We’ll start well 1 at 50%, then 2 and 3 and 4, and make sure they’re running together, and the oil is co-mingling together. We do that for awhile and then boost up production to 100% over 24 days or so.”

Shaw says “They’ve got as much appraisal data for Athena as they need.  They’ve scienced it as much as possible within what is considered a reasonable cost level for discovery & appraisal work.”

McKendrick adds that from his point of view, the real risk becomes apparent later – “The decline rate on Athena is 20% in Year 1—if you start to see it decline more than that then you get concerned.”

Now, not only does Ithaca have the money in the bank to develop Athena, they also have the cash/cash flow/debt lines to get their next big discovery – the Greater Stella gas project in the North Sea – into production.  Three separate assets in that play could collectively add 10,000-15,000 boe/d by the end of 2013.

“Christmas trees are ordered (http://en.wikipedia.org/wiki/Christmas_tree_%28oil_well%29) and have been announced to the market,” said McKendrick.  “Christmas trees are the longest lead item on the project.  We will select the concept of project next month, and announce that in late Oct, when we are ready to start getting contracts, like the Front End Engineering & Development (FEED) contract.  We will award the drilling contract on a turnkey basis vs a dayrate basis, giving us one price.  We prefer a contract on those terms.”

The last public guidance management gave for Ithaca’s share of the capex for Stella was $370 million, but McKendrick said that will become more firm later this fall when the final field development plan (FDP)  for Stella is announced in December 2011. With $120 million cash, $140 million untapped debt and $300 million 2012 cash flow, Ithaca can internally fund this.

I confess that in 2010 and early 2011 I was bearish on medium-long term European gas prices (the #1 reason I missed the beautiful run by Realm Energy (RLM-TSXv), but the Japanese earthquake and tsunami that swamped their nuclear facilities have changed that.

I thought one of the reasons The Street was a bit nervous on Ithaca is because Athena is their last major OIL asset to come into production.  The market just didn’t see Greater Stella’s dry natural gas as SEXY as oil, and that could impact its valuation.  But now valuation is (I hope) rock bottom, and McKendrick says gas is the future fuel of Europe.

“Winter gas prices are now over $10/mmcf, and spot is now $8.70/mmcf.   As Europe gets greener, its consumption of gas increases.  Coal fired plants are being shut down and there are no new-builds ongoing.”The Japanese earthquake took German nuclear out and the UK is building no more nuclear.  Gas is becoming the fuel of choice for Europe and the UK.  Europe is mopping up Qatar supply.

“And why is Russia not supplying gas into Europe?  Because its supplies are going back into their own country, their domestic market.  And Russia just signed a huge deal with China, where China will pay for gas lines through Russia to China.  I’m particularly bullish on gas prices in Europe from late 2012 onwards as the economies also recover.”

Whenever I talk with management, I always ask them these two open-ended questions, among others:

1.   What if anything is there that you think that the analysts who are covering your company are not paying enough attention to?  Here’s what McKendrick had to say:  “Analysts haven’t worked out what our tax loss pools really mean, and how it will grow—it grew again this quarter as we continue to develop assets and pour capital into the North Sea.” He says there are four years of tax loss pools available to Ithaca now.

2.   What do you feel is the most under-appreciated aspect of your company by investors? McKendrick had no hesitation: “(It’s our) Risk profile. Ithaca has a strategic partner across all its assets—Dyas. Dyas is a private Dutch company with 30,000 boe/d production. They are strong financially and experienced technically. Having them as a partner means risk mitigation. Dyas is putting up as much or more money than us. Dyas is the Oil and Gas arm of SHV, the biggest private Dutch industrial conglomerate.”

In conclusion, the negatives against Ithaca are:

And that is balanced against current production of around 5,000 boepd, (counting the latest acquisition of Cook which closed in August) with another 5,000 bopd oil production coming onstream in December.  2012 operating costs are expected to be roughly $30/barrel, meaning cash flow per barrel could be close to $80 on current $112/bbl Brent pricing, and profit per barrel (the netback) at $50—both are very high, profitable numbers.

So despite a low risk, high-build in production within three months, and a very low valuation on all metrics, Ithaca’s stock remains firmly under the thumb of a nervous market.

Shaw, for one, is not concerned.

“The Ithaca team has done a great job at putting themselves in a position to turn a new major offshore field every 12-15 months… that is execution in a big way for offshore oil & gas.”

“Their challenge is to get up to 15,000 bopd and then someone will be interested in buying them, whether it’s the Koreans or Chinese or the Tullows of the world.  That’s the name of the game.”

“Any company producing 10,000 to 15,000 bopd and getting $112 Brent pricing, will attract the attention of others. Ithaca is getting more attractive by the day on that front.”

The Athena countdown is on.