Editor’s Note:  My subscribers often suggest junior oil and gas stocks to me, to which I reply – convince me.  Write me a story about why I should care about that stock, and use my regular format.

Two subscribers mentioned – and wrote up – Reliable Energy (REL-TSXv). Reliable Energy is NOT an official OGIB stock pick and  I do not own Reliable, but two aspects of the company intrigued me.  One is the high profitability of their Manitoba wells.  While not big producers, they are shallow, low cost and highly profitable wells.

The second item that caught my eye is their new exploration play in Montana – which, if successful, would push-out the known western boundary of the main Bakken area.  This play – already the biggest onshore discovery in North America in decades – keeps getting bigger.  It’s possible Reliable could make some mention of it in  April when they announce their  2010 year end financials.

Their Montana play is a 45% working interest on the Fort Belknap Indian Reserve, just west of the Elm Coulee, oil-producing area. Montana Exploration (MTZ-TSXv) is a partner in the project.

This OGIB report was written by Richard Steed, with a contribution by my colleague and friend Michel Massaad, who writes his own oil and gas trading blog at www.beatingtheindex.com. 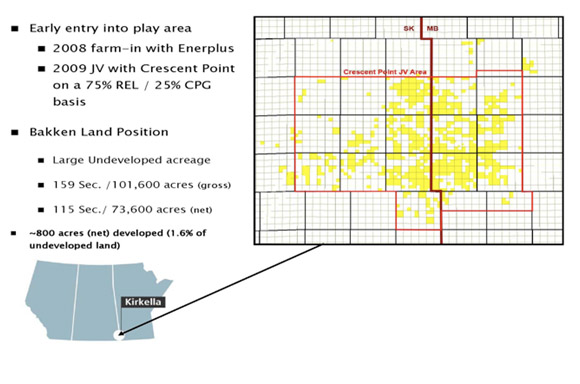 These Saskatchewan/Manitoba Bakken lands (Kirkella Lands) were acquired in 2008 through a farm in with Enerplus Energy for 75 sections. In 2009 Reliable did a joint venture deal with Crescent point Energy; of which both parties pooled their lands for a 75%-Reliable and 25%- Crescent Point partnership. Crescent Point owns 32 million shares of Reliable and Reliable is the operator of the area.

Reliable then acquired Element Energy in October 2009 to further consolidate land in the region. To date Reliable Energy has roughly 77 000 net acres of potential Bakken lands.  Reliable’s Murray Swanson (President and CEO) says that 90% of this land (Saskatchewan/Manitoba Bakken) was purchased for an average of $50 an acre.

Swanson also mentioned at a conference in late 2010 that the Kirkella area is Reliable’s primary focus and there is no intention to be drilling land that Reliable has in Alberta in the Trochu basin (19 200 acres of light oil potential).

Initially, vertical drilling was used by Reliable in Kirkella, with some wells coming on stream at over 100 boe/d.  However beginning in August 2010 horizontal drilling started and 5 of the 6 horizontal wells that were planned were completed by the end of 2010.

Acumen Capital Research has stated that they believe the oil is there (in the Kirkella region) and the only concern in the area will be completion and engineering of these wells… aka: trial and error. 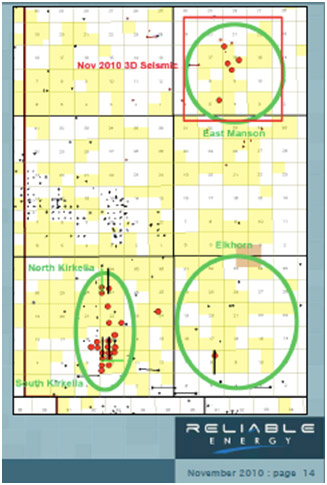 There is really three focus areas in Reliable’s Saskatchewan/Manitoba lands; Kirkella, East Manson and Elkhorn (as illustrated above). The formations that are being targeted here are the Bakken, Lodgepole, Three forks, and Torquay, which all have potential for light oil (38-41 API).

Reliable believes that the primary recovery from this area could be in the neighborhood of 90 000 – 100 000 barrels per horizontal well.  And Reliable has alluded to the fact that secondary recovery (water flooding-which is working well in the area) could result in doubling of reserves.

And while large IP rates (Initial Production) impress the market for a day or two, the big money in the oilpatch wants greater reserves – more oil.  Surprisingly, the market will pay more for greater reserves that get produced over a long period than it will for the much more profitable big gushers that pay out quickly, but also deplete quickly.

Most recently Reliable’s 5-34 horizontal well was placed on production December 3, 2010 and stabilized at 133 bopd. A Raymond James report in late January stated that this 133 bopd after 6 weeks on production was considerably stronger than the company expected – and the stock showed it as it went from 33-52 cents that month.

Their 6-15 well, which only received 8 or 20 fracs, due to technical issues, produced 75 bbl/d for the month of December (which is encouraging considering the completion was only half done and will be completed in 2011).

Bakken wells in the area cost roughly $1.5 million, but with $75 oil, initial production rates of 100 boe/d and 90 000 barrels recover per well the net backs are $52. With these assumptions the break-even price for Reliable is said to be about $40 a barrel. Reliable will spend $18.7 million in 2011 on drilling 15 (12 net) horizontal wells and 2 (1.5 net) exploration wells on their Kirkella lands.

The market is expecting results soon from five more wells in this play – likely when they report their year end financials they will include an operational update.

At current oil prices Reliable has a recycle ratio of at least 2.5:1.  The recycle ratio is the profit per barrel (the netback) over cost per barrel.  So for every dollar they spend finding and extracting the oil, they get $2.50 back.

This play is not yet priced into the stock to any meaningful degree.  In October of 2010, REL announced the acquisition of a large tract of land in Blaine County Montana. The company was able to secure 100,000 net acres from a US company in financial difficulties for $10 an acre.  Management believes this land to be prospective for multi zone opportunities including the Bakken. Prior to closing the deal, they drilled an exploratory well which produced similar log characteristics to Elm Coulee (Middle Bakken Play, 350+ wells producing currently at ~150 boe/d). As the Bakken play expands west, this large land package can potentially turn out to be VERY valuable if drilling is successful. 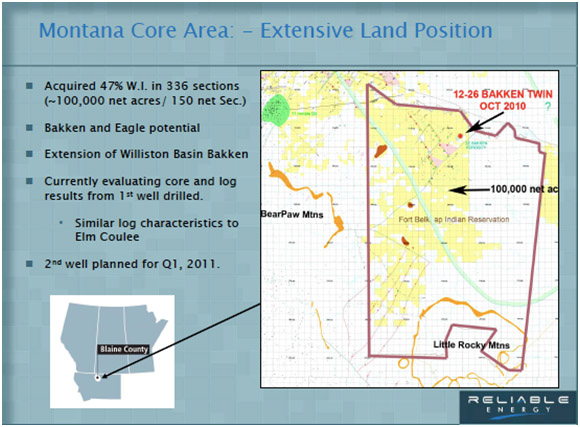 Along with a JV partner and a farmee (REL is a 45% JV partner), 3 more vertical exploratory wells are planned for H1 2011 as part of the delineation process. The first well was spud in March of 2011.

Even though this is still a very early exploration play, the downside is limited because the company picked up the land for such a low cost, and could get their money back by selling it for its Eagle Gas potential. On the other hand, if the play is confirmed for Bakken oil, land in the area might witness the same mania that the Alberta Bakken went through in late 2010.

If the current well being drilled is successful, land prices will increase substantially and one of REL’s options would be to simply sell out their land for a much higher price per acre and walk out with a significant payout.

Proceeds would be reinvested in REL’s core area of SW Manitoba where it has accumulated a horizontal drilling inventory of at least 190 net locations to date.

Or they could develop this large new play.  Reliable said they will be reporting year end financials on April 11, and an operational update at that time may give a 24 or 72 hour test rate.  However, management may decide to wait for a 30 day test rate, meaning no news for investors until early May.

The Trochu Basin is located approximately 150 kilometres northeast of Calgary between Red Deer and Drumheller, Alberta. In 2007, REL acquired 19,200 acres prospective for Nisku light oil based on a private company’s discovery, TAQA. This land is officially up for sale as REL wishes to keep its primary focus on its high netback low risk operations in Saskatchewan/Manitoba.

Reliable is systematically building up an inventory of horizontal drilling locations on their Bakken lands in Saskatchewan/Manitoba; which can make a small oil/gas producer a nice takeout target for a larger player.

In 2011, Reliable expects to increase average production to 1100 bopd an increase of 229% over 2010 and exit the year with production at 1500 bopd. Reliable Energy has roughly 200 000 net acres in Alberta (Trochu Basin), Saskatchewan/Manitoba (Bakken), and Montana (Bakken). Reliable is a small cap oil weighted (100%) energy company that has the ability to produce significant production growth for shareholders on Kirkella alone — and if Blaine County, Montana has Bakken oil like North Dakota, Saskatchewan and Manitoba — then Reliable Energy is just scratching the surface for light oil growth.