One of the (most profitable) things I do for subscribers is stay on top of all the new shale plays popping up all over the world.

While shale oil and gas are widespread in North America, the global shale revolution is just starting — but is sure to continue for the next decade or three, creating many discovery opportunities and enriching investors all along the way.

The juniors have been leaders in finding and developing shale plays both in North America and abroad. But there are more plays going on than I can handle on my own, so I have asked my colleague Michel Maassad, editor of www.beatingtheindex.com, to give readers an update on a huge new shale oil and and shale gas play in Argentina. It’s a rapidly developing play, and below you’ll learn the juniors who were in first, and who could be poised for huge success if the play works.

This play has everything investors could want — great geology, early stage juniors with big land positions, and majors who are already paying to get in.

What is the first thing that comes to mind when you think of Argentina?

The wine, the beef or Evita? How about adding “massive amounts of unconventional shale gas” at the top of the list? According to the US Energy Information Agency, (EIA), Argentina has 774 Tcf of technically recoverable shale gas resources, the world’s third-largest assessment behind the US and China.

Yet Argentina’s production and reserve figures are a far cry from what they were a decade ago. Its oil production has been in decline since it peaked at 916,000 bopd in 1998 while its oil reserves peaked at 3 billion barrels in 1999.

Similarly to oil, natural gas production has been declining since 2006 and its reserves are now half the estimated 28 TCF in 2000. Reserves decline as they are converted into production.

But there is now a renaissance in hydrocarbon exploration and production, which could prove to be a boon for a select group of junior companies operating there.

Argentina has a long history with the oil and gas sector dating back to the early 20th century when its state oil company YPF was formed (Yacimientos Petrolíferos Fiscales).

The country’s oil and gas fields are mature with a widespread oil and gas pipeline network. According to EIA estimates in 2010, the country produced 764,000 bop/d and 4 BCF/d of dry natural gas making it the largest producer of natural gas in South America.

As for reserves, the Oil & Gas Journal’s estimate as of January of 2011 stands at 2.5 billion barrels of proven oil reserves and 13.4 TCF of proven natural gas reserves.

Following the economic meltdown in 2002, the government froze energy prices and utility rates in order to support its struggling economy but by doing that it rendered exploration and production uneconomic in several basins.

The price for crude is currently capped at $58 per domestically produced barrel, which is well below current market price (though price offers for oil surpassed $65 in September reflecting higher Brent pricing).

As for natural gas, if you thought $4/mcf in North America was sad, how does a fixed $2/mcf sound?

But now the economics are improving—see the chart below. That has focused a lot of new investor attention onto Argentina oil and gas. 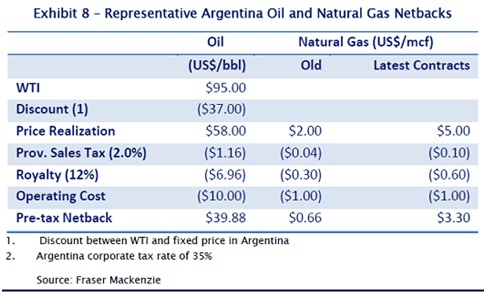 On top of the price caps, companies have had to pay a corporate tax on profits of 35%, a provincial royalty of about 12% on the value of production and a provincial sales tax of 2%. Argentina’s fiscal regime is certainly not generous and combined with government capped oil and gas prices, it resulted in declining production and reserves over the years.

At the same time, demand surged as the economy grew on average 8.5 percent between 2003 and 2008. We are talking about a nation with a population of 41 million whose energy consumption weighting is 90% to hydrocarbons which is unusually high relative to a global average weighting of 59% hydrocarbons including 24% gas.

While the country is still self sufficient and a net exporter of crude oil, Argentina has an energy crisis when it comes to natural gas – because it is dependent on this source for its energy more than any other nation in the region. Natural gas accounts for 55% of the total energy consumption.

The government effectively deterred investment from this sector which turned Argentina from a net exporter of natural gas in 2007 to a net importer. The second-largest economy in South America rations supplies during winter by restricting natural gas deliveries to industrial users when cold boosts demand.

Energy shortages means expensive imports, $5 billion per year in natural gas imports from Bolivia – or more like $5 billion in subsidies to a foreign government!

Yes, this is where it gets interesting. Punitive pricing controls kept most of Argentina’s oil and gas regions underexplored and underdeveloped, but in 2008 the government introduced the Gas Plus and the Oil Plus programs, entitling companies to sell oil and gas developed from newer and unconventional fields at higher prices.

Under the Gas Plus plan, recent projects were approved to receive prices in excess of $5/mcf and as high as $7/mcf for natural gas while the Oil Plus plan adds up to $10 per oil barrel. The government has recognized the need to incentivize the industry in order to grow production and reserves and cut its dependency on expensive hydrocarbon imports.

And it’s working. Major E&P companies are moving into the country for its conventional resources and its massive unconventional shale gas potential thanks to favorable foreign investment policies coupled with the Oil Plus and Gas Plus programs.

Its technology is increasingly gaining acceptance in the marketplace…
Early-adopting customers are renewing their contracts (for up to 3 years)…
Its customer base is growing and diversifying.

What’s more – a prominent North American investment firm has a target share price 2X today’s price…
That’s why I think 2012 will be a significant growth year for this company.

October’s next presidential elections could also result in a government who is more aggressive in promoting tax benefits and higher realized prices for oil and gas further stimulating industry activity and reversing the slide of its reserves. Total or partial removal of price caps exposes companies to significant valuation upside.

Argentina has 26 mapped hydrocarbon basis but only 5 are proven and producing: Noroeste, Cuyo, Neuquén, San Jorge and Austral. Neuquén and San Jorge hold 70% of Argentina’s conventional oil and gas reserves and account for over 85% of the country’s oil production and close to 70% of the gas production. Half of the country’s shale gas resources are found in the Neuquén Basin with the Vaca Muerta shale accounting for 240 Tcf of the 774 Tcf. 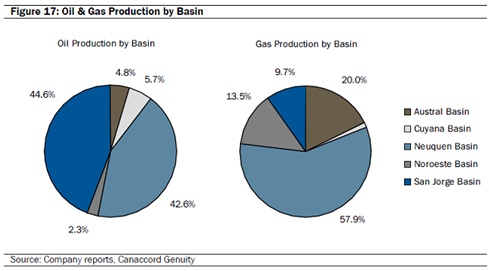 There’s a lot of tango going on between large integrated players and small cap juniors with large tracts of land – now making Argentina the emerging hot spot in South America for a few Canadian-based oil and gas companies.

What’s attracting these majors is the unconventional potential in shale formations particularly the Vaca Muerta (Dead Cow) shale in the Neuquén Basin. The Vaca Muerta is attracting a host of players looking to milk its precious hydrocarbons.

The August 2011 deal between Americas Petrogas (BOE-TSXv) and Exxon Mobil (the world’s largest public integrated oil and Gas Company) is just more evidence of a land grab. Exxon has agreed to fund up to $76.3MM for evaluation of the hydrocarbon potential on 255 sections of land earning up to 45% in Americas Petrogas Los Toldos blocks in the Neuquén basin in western Argentina.

This is not Exxon’s first foray into Argentina; in fact, thanks to the latest deal it will have almost doubled its land to more than 310,000 net acres in the Neuquén Basin. Exxon is not the first large cap either with Argentinean presence. Many large caps have been positioning themselves in its proven basins since 2010.

Apache Corporation is another large cap which entered into a farmout agreement with junior player Madalena Ventures (MVN-TSXv) last year. Apache agreed to fund exploration commitments on Madalena’s 124,000 acres Cortadera block in the Neuquén Basin which includes the drilling of at least one exploration well in exchange for a 50% stake leaving Madalena with a 40% working interest. 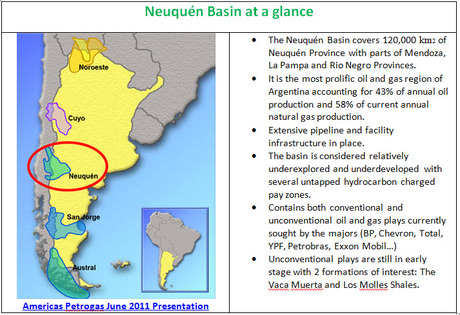 The Vaca Muerta is the formation of interest for shale oil and gas development. The shales are considered primary source rocks (rocks from which hydrocarbons have been generated or are capable of being generated) in the Neuquén Basin. The formation of Late Jurassic-Early Cretaceous age has a thickness starting at 50-100m in the east and rising up to 700m in the west. Following the same East-West axis, depth rises from 1,220-1,830 meters with wet gas and oil windows in the shallower east and dry gas in the deeper west. 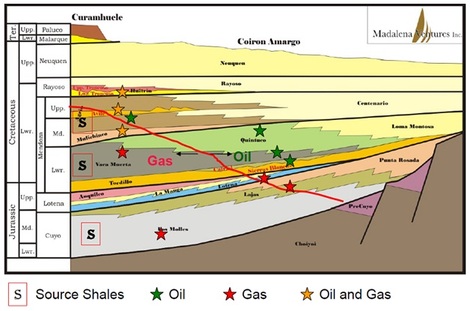 The assessment of the Vaca Muerta is still in its early days but so far the results have been steady as YPF, the state oil company, recently announced 2 significant oil and gas discoveries: a 150 million bbl light oil discovery and a 4.5 Tcf gas discovery in the vicinity of Neuquén’s prolific Loma La Lata field. YPF planned 17 new wells and 14 workovers to be fractured in 2011 for a total investment of $270MM.

The 150 million bbl light oil discovery is based on 6 vertical exploratory wells drilled into the Vaca Muerta which had IP30 (Initial Production rate over 30 days) rates between 200 and 560 boe/d.

These vertical IP30 rates are in some cases superior to multi-stage fracked horizontal wells in the Bakken or Eagle Ford – North American analogs to the Vaca Muerta shale – which makes it a world class emerging shale play. Even with similar geological characteristics, the Vaca Muerta is thicker, which may translate into higher recoveries, especially on the western side.

According to a recent estimate by the EIA, the Vaca Muerta could hold more than 687 TCF of original gas in place with risked technically recoverable resources of 240 TCF.

There is a huge growth potential in unconventional oil and gas development that offers well-positioned small companies significant valuation creation opportunities. However, only a few junior companies positioned in Argentina have significant land holdings in the Neuquén Basin.

We cover these companies in Part 2 of this report.