The Horizon BetaPro NYMEX Natural Gas Bull+ ETF (TSX: HNU) has been one of, if not THE most profitable trades in natural gas for the last four years, yet my sense is retail investors have missed it completely.

Why? The reason is simple—you have to short it. Most retail investors don’t short, and fewer think about shorting an “Up” ETF.  I admit, it’s not a trade for novices.  But it’s available to everybody.

I’m going to outline just how lucrative this trade has been over the last four years, and how you can capitalize on this downtrend in natural gas. I’ll explain the two  “built-in” factors to this ETF that add to the profits of a short position—and lose you money if you’re long.  I’ll even tell you when, historically, the best time of the year is to initiate this trade—and it’s coming up VERY SOON.

“Shorting” means selling first and buying back later, as opposed to the more common convention of buying first and then selling.  The short seller profits by selling at a higher price and buying later at a lower price.  The difference in the price between where he sold and where he bought is the realized profit of the trade.  This is how money is made on downtrends like we are witnessing in HNU.

(If you just learned what “shorting” is by reading this, do not attempt this trade;-))

HNU started its steep downtrend in July, 2008 just a few months  after its January inception.  The ETF is down 99.86% from that high, far underperforming the underlying commodity it is supposed represent.  Now, this is very bad news if you’re long.

The ETF actually represents one of the most reliable trades in the sector—and it is not too late to get in.  And as I mentioned,  one of the ideal annual entry points over the last three years is coming up very soon!  If retail investors want to ride a trend this is it. The trend in natural gas is currently down, and even if the trend reverses, there are two built-in features within the fund are likely to stifle long-term upward price appreciation: “contango” and re-balancing.  I will explain both of these.

The Structure of Underperformance

HNU is a leverage ETF which attempts to “seek daily investment results equal to 200% the daily performance of the NYMEX Natural Gas futures contract for the next delivery month” according to Horizons website.

This is accomplished through purchasing natural gas futures contracts, and then at specified dates rolling the contracts which are nearing expiry into new futures contracts.  According to Horizons website “This mechanism also allows the investor to maintain an exposure to commodities over time.”

Yet those who have bought, or gone long the ETF since the start of 2011 have lost 64% of their capital, while the underlying commodity has lost 22.77%.  The ETF is leveraged, therefore the theoretical loss HNU should have experienced so far this year is negative 45.54%.  Investors have  lost about 17% more than anticipated this year alone (the fund charges a 1.15% management fee).  Since inception the picture is grimmer—but only if you’re long  It’s actually a beautiful thing if you’re short. 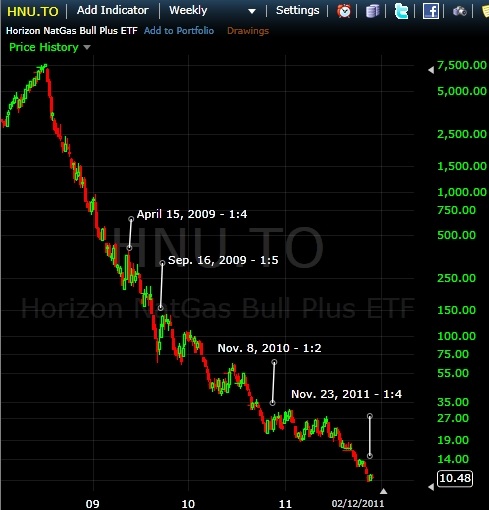 Horizons does point out that “These ETFs do not seek to meet their investment objectives over any period other than daily.”  This is clearly stated multiple times in the ETF prospectus, indicating the ETF does not track the commodity over the long-term, rather only on a daily basis.

A major factor in the decline witnessed in HNU over the long-term—and something that stacks the deck in favour of being short–is due to a phenomenon known as “contango.”  Futures contracts, which HNU purchases, are an agreement to buy an asset at a fixed price at a forward or future date.  When the futures price is higher than the spot price, that is known as “contango“.  The natural gas market is usually in contango; futures prices are higher due to storage costs and uncertainty; so a premium is paid for that uncertainty.

But as that more expensive  futures contract approaches its  expiry date—the date the gas must be delivered–it will converge with the spot price—which by definition means it declines in price. Since HNU does not take physical delivery of the commodity it trades, it must continually “roll”, or sell futures contracts which are expiring and buy longer-term contracts—usually the next month.

By continually paying a higher price than the spot price each time the contract is rolled, there is an inevitable long-term systematic erosion of value within the fund, and a continual slide in the value of the ETF.

This is GREAT—if you’re short.  The House Rules are in your favour.  But it’s a profit killer if you’re “long”  though.

As for December 5, January 2012 Natural Gas is trading at $3.465.  February, 2012 Natural Gas is trading $3.492.  Not only does the fund lose money because of the downtrend (sells expiring contracts at a lower price) but it then pays a 2.7 cent (this will fluctuate) premium for the next futures contracts.  Compounded and leveraged each month, the losses become staggering, as shown by the ETFs decline.  Keep in mind the fund is leveraged-essentially doubling the premium and magnifying losses. . . Month after month, all else being equal, this occurs.

The contracts HNU is forced to sell will almost always be lower than the price which is paid for the new contracts they must purchase. This will offset any long-term gains the fund could theoretically make, even if natural gas rises over the long-term. The fund loses if natural gas drops, stays the same or even rises slightly. These regular losses and inefficiencies continually drive down the value of the ETF.  Again, if you’re short, this is adding profits to your wallet.

The second big structural factor in HNU that is in favour of the “shorts” is the issue of leverage and compounding losses.  HNU attempts to reflect 200% of the movement of natural gas on a daily basis.  Assume you invest $100 in the ETF, on the first day natural gas rises 5%.  This means your investment will be worth $110 (you make 10% because of leverage).  But assume the following day natural gas falls by 5%.  Your investment is worth $99 (you lose$11 or 10% of $110).  Many investors think they should just be back at $100, but compounding and leverage create a loss.

How to Make Money

Investors don’t usually think about short-selling but in this case, shorting the ETF has historically been the way to make money over the long term. Shorting selling is taking advantage of both sides of the market—up and down—movements which occur regardless of short-seller involvement.

“Market participants are permitted to sell Units of an ETF short and at any price…” according to the prospectus for the ETF.  Short selling is a legitimate way to trade the ETF and is noted in the fund’s legal documents.

Shorting ETFs is often more efficient than shorting an individual stock or commodity:

NOTE: The underlying commodity may be prone to a short-squeeze where buyers push up the price and people with short positions are forced to cover their position (pushing the price even higher) or receive a margin call on their short position. Investors should be aware this can cause sudden, sharp short-term rises in the ETF.

In an ETF which has proven very inefficient for buyers over the long-term going short is the logical strategy.  (The industry jargon for buying is called “going long”.) Couple this with an overall downtrend in natural gas—even if natural gas begins an uptrend the rise in the ETF is likely to be muted—the trade sets up very well for investors who are willing to incorporate short selling as one of their tools.

The fund is leveraged which means on a daily basis there can be big percentage moves.  Short-selling blindly is not wise.

PART 2—On Saturday, I tell you historically WHEN is the best time to make this trade to maximize profits—and it’s coming soon.  And I’ll also explain what happens to this short trade if natural gas prices start to rise (Hint—it’s better than you think.)

Disclaimer: Cory Mitchell nor Keith Schaefer currently hold a position, short or long, in TSX:HNU.  This information is not to be construed as investment advice in any fashion. Always consult a licensed financial planner to help determine what investment strategy is best for you.

Next post: Oil Exec: Well Costs To Fall in Bakken