The investor trend towards yield could have a big impact on the US junior oil and gas market, a new report by brokerage firm Raymond James suggests.

Energy Analyst Kevin Smith says the stocks of Upstream Master Limited Partnerships, or MLPs, are worth almost double their regular corporate counterparts (called “C-corps” in industry jargon).  And that big valuation gap could start some Mergers and Acquisitions (M&A) activity in the junior US energy space.

“We are not saying that you should expect a rash of Upstream MLP acquisitions of C-corps tomorrow, but we are saying we think that it is coming over the next few years,” he writes.

MLPs trade like stocks on American stock exchanges.  They have a big tax advantage in that they don’t pay corporate tax; investors are treated as owners of the company, which means they get the corporate tax breaks too. (Isn’t that a switch?)  This lowers the income tax paid on the earnings.

Then the MLP pays out most of its excess cash flow to shareholders in the form of a distribution — which can end up creating a big cash yield.  (That’s why I think the U.S. will see a LARGE increase in MLPs over the coming few years as interest rates stay low.   Investors love seeing this money dropped into their account, and price the stocks based on the yield they give.)

And in this tough junior oil and gas market, yield stocks are holding up the best.  The reason is that MLP investors are looking at yield for its primary valuation method. Regular corporations, or “C-corps” as industry jargon goes, investors are looking at earnings and cash flow valuation methods — and those are likely going to decline this year and next due to the weakness in the natural gas pricing. And overall market volatility is reducing valuations on the junior oils. That’s what’s making Upstream MLPs valuations (stock prices) much more sticky vs. the “regular” C-corps.

They’re holding up so well in fact, that Smith says it’s only a matter of time before the MLPs use their much better valuation — stock price — as a currency to buy regular junior oil and gas companies.

“While no (upstream) MLP has bought a producing C-Corp yet, I think it will, I think it’s inevitable,” Smith told me in a phone interview from Houston.

Upstream MLPs have bought many producing oil and gas assets, but they have yet to swallow an entire company.

“At some point, $100 million (asset) deals won’t quench your thirst… as MLPs grow, they will need to do bigger and bigger deals,” Smith says.

There is a tax issue when MLPs buy C-Corps, but the valuation difference between the two groups now make up for most of that. 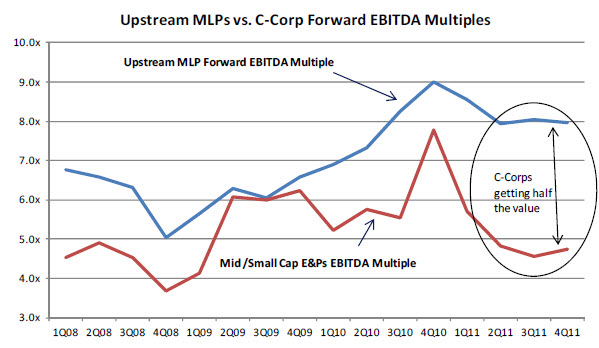 LINN Energy (LINE-NASD) is the poster child of the new upstream MLPs that are going public.  In five years it has grown from a market cap of just over $500 million to now $7 billion, and is a Top 20 oil producer in the US.

So, as an investor in junior oil and gas companies, where should I be looking at take-out candidates?

While the difference in valuation between MLPs and natural gas-weighted companies are the greatest, Smith points to the oil producers.

“I would bet (MLPs buy) oil-weighted C-Corps that are under-loved.  The most active market is the Permian Basin. We have seen quite a bit of activity in this area over the last 24 months.  And some California plays will get some looks, with low decline rates.”

In his October 31 report, Smith said that public C-corps are trading at a discount to what many private E&P property packages can be purchased for today (5-6x EBITDA for sub $500 million transactions).

This game that Smith is talking about completely changed the way junior oil and gas companies operated in Canada.  In Canada, MLPs are called “Income Trusts,” and while there might be some subtle differences, they are basically the same tax-advantaged public company that allows big chunks of their cash flow to pass through to unitholders.

How Oil Fields the World Over Are Getting a “Second Life”

Extending the life cycle of an oil reservoir — by years — could mean the difference of tens of millions of dollars to an oil producer.

That’s exactly what one company’s new technology does… It improves oil production rates while slowing the rate of decline.

Adoption, meanwhile, is steadily increasing inside the oil & gas sector. In fact, this company’s technology is now employed by major oil producers — or soon will be — on 4 different continents.

To get the full story – and how you could profit – click here.

The number of junior companies soared as management teams now had an easy exit plan — build up production with a decent land base and get bought out fast by a trust.  They didn’t need to plan for the long term and, generally speaking, didn’t need to be as disciplined in how they spent their capital.

With all the shale plays being discovered in the US, could this be the beginning of the same type of mania that overtook Canada?

“We’re not quite to point where we were in Canada in 2005,” says Elliot Gue, editor of MLP Profits (www.mlpprofits.com), who specializes in US MLP investing.  “We are seeing a number of MLPs getting listed.  Some are small and hoping to get bought out.”

Gue says he is already seeing a lot of MLPs buying out private oil and gas companies.  “In the Permian Basin in Texas there are over 1,500 operators. Most only own a small amount of land. Those guys are selling out to MLPs.”

So there is definitely a trend here, similar to what Canada went through starting 15 years ago?

Smith says the new upstream MLPs could be a long trend: “With current interest rate trends, it doesn’t look like that valuation gap will close anytime soon.”